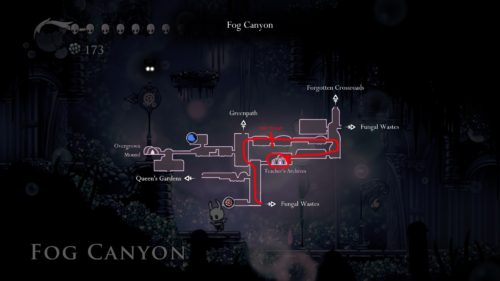 Fog Canyon is relatively straightforward to navigate. Form Queen’s Station, take the upper left exit to enter Fog Canyon. Inside Fog Canyon, head up two rooms and take a right. Inside this room will be Abyss which is blocking your way. Use the Shade Cloak to dash through and continue right until you can’t go any further. In this room head down then left until you end up at the Teacher’s Archives. The Teacher’s Archives holds the third and final mask.

This fight is a bit different than those you have fought up to this point. Uumuu only takes damage after being deflated by (name?) an ally who appears during the fight. The ally attacks Uumuu and deflates it for a few seconds, which is when you can make your attack. The easiest strategy I can give you is to stay moving. The electricity will either follow your movement, or be stationary. When the electricity is stationary try to get into an opening before it surges. This is one of the easier fights in Hollow Knight. 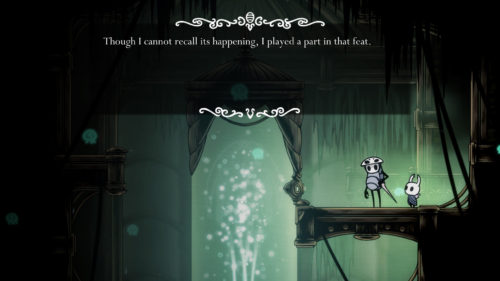 After defeating Uumuu, head into the area which is located below the boss arena. Here you will be able to access the third and final dream which will unlock the Black Temple and our showdown with Hollow Knight’s final boss!

Leave Fog Canyon and take the Stagway to Dirtmouth. We are almost done!!