South Park The Fractured But Whole received its first piece of story DLC today called From Dusk Till Casa Bonita. This new expansion places you away from South Park and has you facing off against Vampire Kids (not to be confused with goth kids), who are attempting to assimilate Kenny’s sister Karen. Since Vampire Kids are lame, it is up to Buttlord and pals to stop the assimilation. To help you on your journey, I’ve put together this From Dusk Till Casa Bonita guide. Use it wisely.

Starting From Dusk Till Casa Bonita 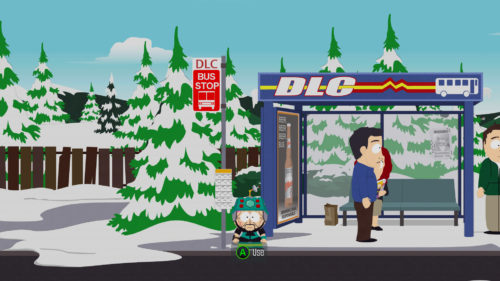 When you login to your save file, you should be met with a message that says you have access to new DLC which can be reached using South Park’s DLC bus stop. In order to start the DLC, make your way to the DLC bus stop (located west of your house) and interact with the schedule on the pole. Select From Dusk Till Casa Bonita and a bus will come and take you away. This starts the DLC. 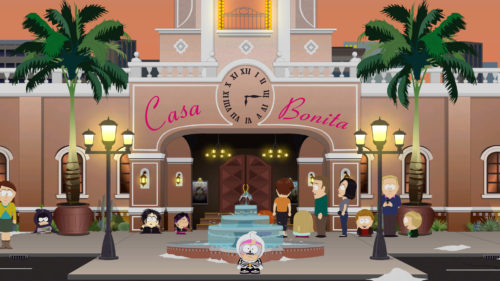 When you get off the bus, you will arrive in the parking lot of Casa Bonita. Here there are a number of things you can collect if that interests you. For the sake of flow, each area of the DLC will be broken up into main story and miscellaneous collectibles/friends/etc.

Main Story: To start the main story in this DLC, head to the entrance of Casa Bonita and you will see Mysterion on the roof. Walk under him and it will trigger a cutscene. During the cutscene, you will learn more about Karen and what exactly is going on. At the end of the cutscene, you will fight a number of Vampire Kids. During this fight, you will be introduced to the new class, Netherborn. You will receive the Heckraiser Costume which features Hood, Robes,  Bracelet, and  Visage.

To get you up to speed on the new class, this fight plays out like previous class tutorials in South Park The Fractured But Whole. You will be required to go through each move in the Netherborn class, and then you will win and the fight will end. Defeating the kids earns you 90XP and a Vampire Elixir. Once the fight is done, head inside Casa Bonita to continue the main story. 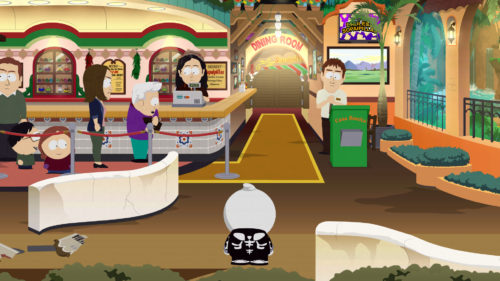 Main Story: Entering Casa Bonita will place you in the entrance/admission area. Directly in front of you will be a lineup with an old lady who is struggling to find a payment method. If you try to enter Casa Bonita’s Dining Room, you will be stopped by the host who basically tells you you can’t enter without a Meal Ticket. Let’s get a Meal Ticket then. 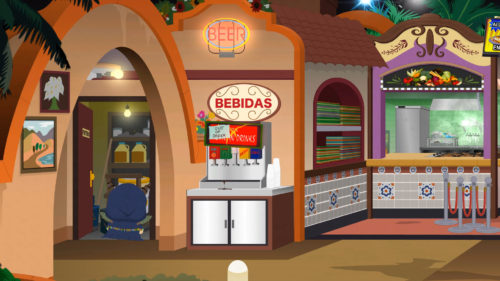 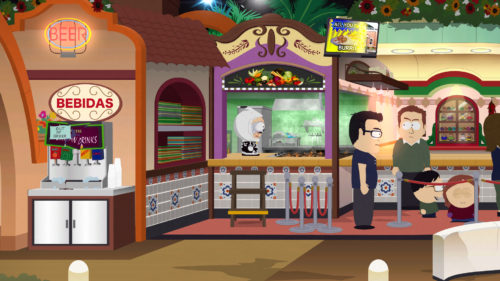 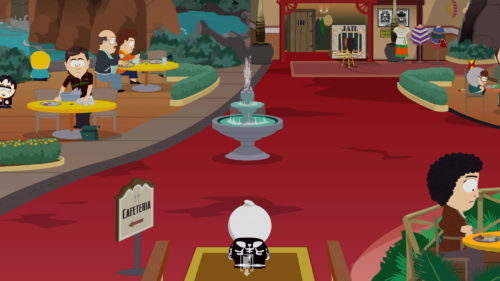 Main Story: Inside the Dining Room you will trigger another cutscene. This cutscene reveals the area and highlights where you want to go next. Before you go to the Vampire Kids, be sure to free Cartman from jail (move the camera to take a picture of him). This will add him to your party. Once Cartman is in your party, head over to the Vampire Kids. 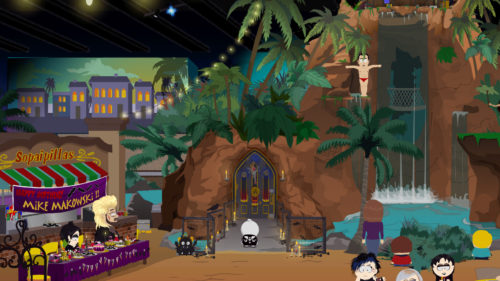 When you reach the Vampire Kids, another cutscene will trigger. Once the cutscene finishes, you will have to fight. Halfway through the fight you you will get a new party member in Henrietta. Finish the fight to earn your first Vampire Relic (1/4). We need to collect a total of four Vampire Relics to unlock the locked VIP Room door. These relics are in three rooms in Casa Bonita: the Lower Dining Room, Arcade, and Black Bart’s Cave. 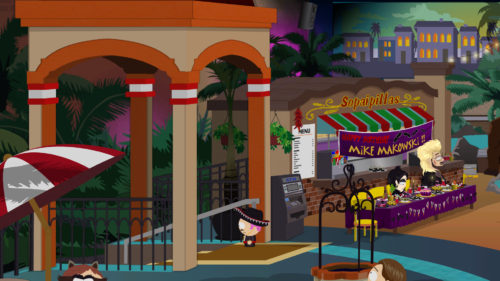 It doesn’t really matter what order you do the three rooms, so I’m going to start with the Lower Dining Room since it’s close by the locked Vampire door. To get here, head down the steps beside the ATM near the birthday party table. 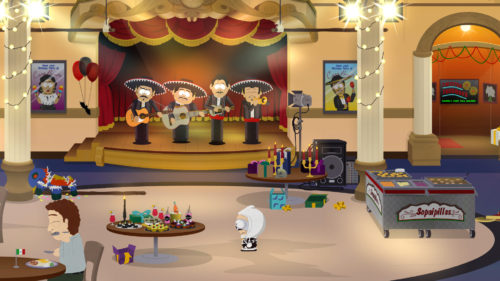 Main Story: Inside the Lower Dining Room area you will see a group of Vampire Kids and Chiquita the Gorilla cooking. You need to defeat the kids and Chiquita to get the Vampire Relic (2/4). Defeating Chiquita and company earns you 90XP, 1x Sopaipilla, and 1x Honey Sopaipilla. Once they are defeated head to the next area (Arcade or Black Bart’s Cave). If you want to play a number of arcadey minigames, go to the Arcade first, otherwise head to Black Bart’s Cave to avoid having to play the minigames. 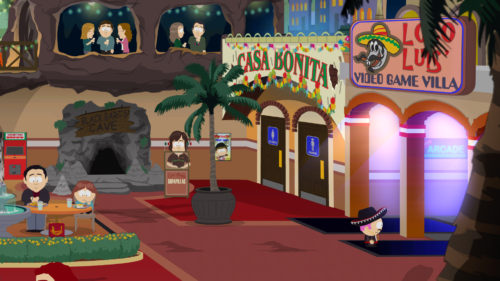 The Arcade is located to the fair right of the main area of Casa Bonita. Leave the Lower Dining Room and walk right until you eventually reach it. Inside the Arcade you will find a number of mini games you can play, as well as prizes to be earned. 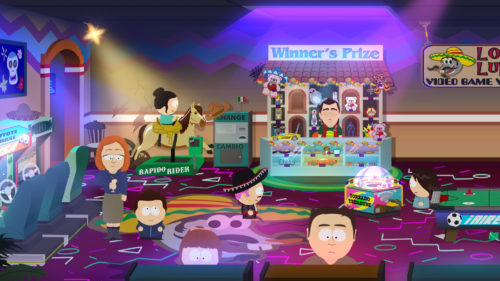 Regardless of which you choose, collect 15x tickets and trade them in for the Vampire Relic (3/4). Once that is done, head to the final area, Black Bart’s Cove, which is located north of the arcade. 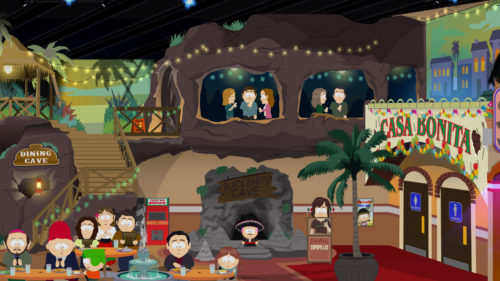 Black Bart’s Cave is a two part room with an entrance puzzle and then a boss room. Both of these rooms will be broken down below. The entrance area features a chest with 15x Tickets inside, which can be good if you don’t want to play the Arcade games.

Main Story: We need to make our way inside Black Bart’s Hideout to find the final Vampire Relic. To do this, we first need to solve the entrance area puzzle. This puzzle is basically about getting passed the kids in line to take a picture with Black Bart, and dealing with the minecart blocking the exit. 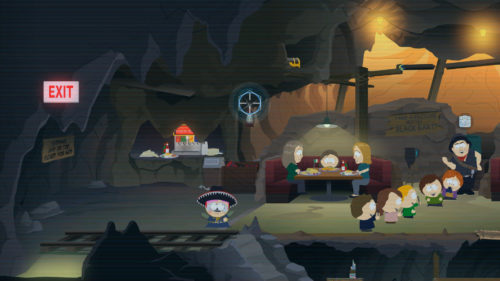 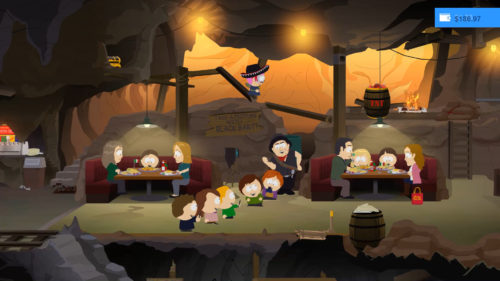 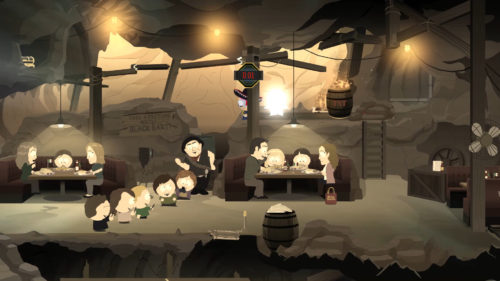 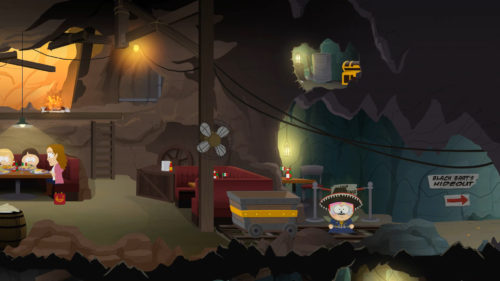 To get passed the kids, shoot the lantern above the TNT crate to reveal stairs heading up. Head up the stairs and knock the second beam down to cross the gap. Cross the gap and use your Time Pause ability to push the barrel past the fire to the rocks. Head down the ladder to the minecart on the right. Move the minecart all the way to the right and then use your Time Rewind ability. Knock break the barrier and head into Black Bart’s Hideout.

Inside Black Bart’s Hideout there really isn’t much besides a boss fight. Head towards the pike of gold/treasure and you will hear some vampiric hissing. This triggers a boss fight with the real Black Bart and some Vampire Kids (you earn 90XP and 1x Sopaipilla for defeating). Complete the fight to earn the final relic (4/4). Leave the cave (either go back the way you came or head right through the door that leads to the jail/photo are of Casa Bonita’s main room) and head back to the locked VIP door. 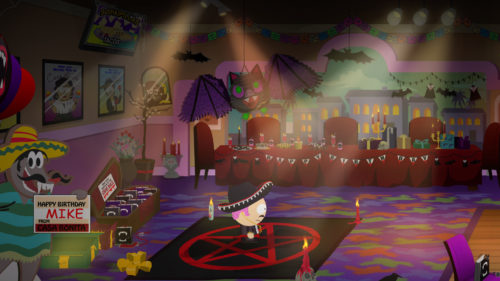 Main Story: Besides a boss fight in this room, there isn’t much else of interest. Inside this room you will face off against Mike and a gang of Vampire Kids (for defeating you earn 90XP and 1x Vampiric Elixir Recipe). Once you do beat Mike & the Vampire Kids, they will run away, heading into the backstage area of the waterfall. Follow them through the door into the backstage area (door has Dracula on it).

Main Story: The main goal of this area is to get to the top of the waterfall. This can be done by using Fartkour. Head to the bridge with the vases/cactus cutout on it. Break the vases and cactus and make your way across. Reverse time so they reappear. Use Fartkour to access the first level. From this level, shoot the elevator down and then use Fartkour to access the second level. On the second level, reverse time and use Fartkour for a third and final time to reach the upper area of the level.

Once in the upper area, you will need to complete a bit of a time distortion puzzle. Basically what you need to do here is use the knockable rafter to create a ramp leading up to the right. Walk up the ramp and trigger your time reversal. Walk across the rafter and pull the large hanging sled to the right. Knock the rafter down so it creates a ramp leading up to the left. Head down the ladder to on the right side and walk up the ramp. Up here is a door leading to the top of the waterfall. 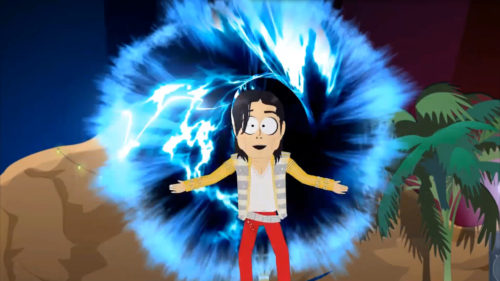 More: Guide to South Park The Fractured But Whole Bring The Crunch DLC

Thoughts on this From Dusk Till Casa Bonita Guide? Drop them in The Pit below.