After killing Nergigante, you will learn about three Elder Dragons that are now terrorising the various areas of the New World. SInce we are monster hunters, it’s our duty to find them and kill them. To do this, you will need to search the Ancient Forest, Wildspire Waste, and the Rotten Vale for clues that will unlock each monster’s mission (similar to Nergigante). The Elder Dragon you unlock in the Ancient Forest is called Kushala Daora, and it specializes in using the wind. To help you defeat this Elder Dragon, use our Kushala Daora Guide below. 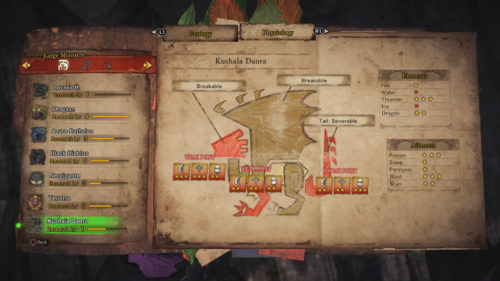 This is the Kushala Daora Physiology report. 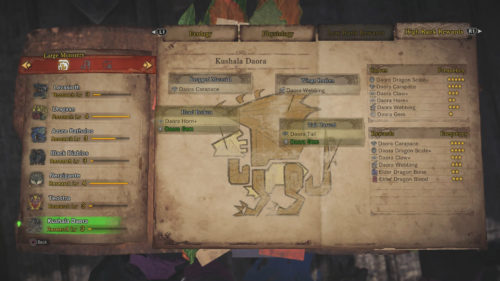 Hunting Quest Text: The elder dragon tracks in the forest? Kushala Daora. I’m sure of it. We know it’s in the Elder’s Recess. For the safety of everyone in Astera, we’re counting on you!

Characteristics: An elder dragon that shields itself with fierce winds, preventing anyone from approaching it. Its skin consists of hard, metallic scales.

Useful Information: When confronted by enemies, Kushala’s wind shield continuously grows in intensity, eventually deflecting bow and bowgun attacks. Its wind shield can be weakened by staggering it, particularly with weapons with Elderseal capabilities.

Wind Pressure: Kushala Daora utilizes Wind Pressure throughout the entire fight. Wind Pressure causes your character to go unresponsive for a few seconds and can even knock you over. There’s not much you can do to avoid the effect of wind, besides avoiding the spots it is present. (Nullify Wind Pressure skill nullifies the effects of Wind Pressure).

Kushala Daora can be a bit of a frustrating fight as it utilize Wind Pressure and speed to make things difficult. With that being said, this Elder Dragon has a relatively small collections of attacks, which means learning the fight is simple. Let’s take a look at its attacks below:

Kushala Daora seems like a tough fight, but is actually the easiest of all the Elder Dragons (sans Zorah). The reason this is a the case is because Daora likes being airborne as much as possible. This makes it susceptible to Flash Pod shuts, which knock it from the sky to the ground where it will lay stunned for a few seconds. You can deal a ton of damage while it is lying down and simply  rinse and repeat.

The Kushala α Set on a female hunter.

The Kushala β Set on a female hunter.

Human: All Materials are Kushala Daora Carves/Drops unless noted. 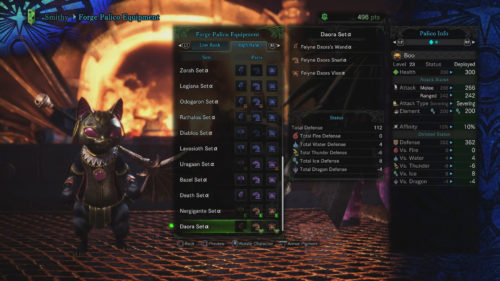 The Daora Set on my Palico.

Palico: All Materials are Kushala Daora Carves/Drops unless noted.

This concludes our Kushala Daora guide. Wish to add something? Drop a comment in The Pit below.