After killing Nergigante, you will learn about three Elder Dragons that are now terrorising the various areas of the New World. SInce we are monster hunters, it’s our duty to find them and kill them. To do this, you will need to search the Ancient Forest, Wildspire Waste, and the Rotten Vale for clues that will unlock each monster’s mission (similar to Nergigante). The Elder Dragon you unlock in the Wildspre Waste is called Teostra, and it specializes in fire. To help you defeat this Elder Dragon, use our Teostra Guide below. 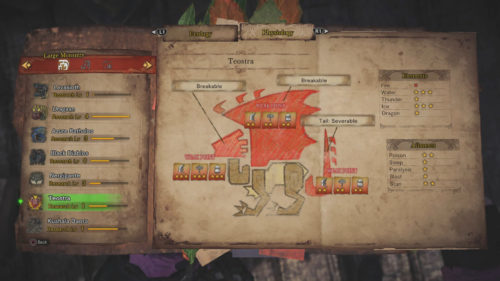 This is the Teostra Physiology report. 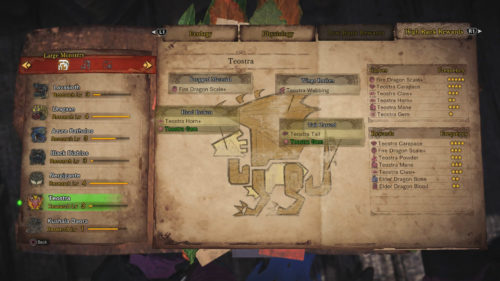 Hunting Quest Text: It’s Teostra that stalks the Waste-Emperor of flame. And now it sits in wait in the Elder’s Recess. Go to it, hunter, and end its searing reign!

Characteristics: Brutal elder dragons wreathed in flames that spit blazing fire. Teostra are of such a fierce and deadly nature that the Guild closely monitors their movements.

Useful Information: The black scale dust, Teostra scatters will spread over a wide area until it finally explodes. Keep an eye on that, as well as the flames it occasionally shields itself in, and aim to stagger it with weapons possessing Elderseal capabilities.

Fireblight: Teostra is a monster that can deal fire element damage. This damage can cause Fireblight, a status effect. When being afflicted with Fireblight, a small flame will appear over the hunter’s health bar (two for Severe), and the red health bar will turn red and begin to decrease. To cure this affliction, simply roll into water once, roll on the ground three times, or consume a Nulberry.

Heat (Arena): Teostra resides in the hot areas of Elder’ Recess. These areas are filled with hot magma which deals damage over time to you. To avoid this, you need to either consume a Cold Drink or wear the Flameproof Mantle. (for Elder’s Recess battle).

Besides Nergigante, I think Teostra is easily the second hardest boss in MHW. This monster is capable of one shotting you with its black scale dust explosion which can catch you off guard if you aren’t careful. Alongside this attack there are also these attacks below:

Teostra becomes inflamed throughout the fight. In this state, it surrounds itself with flames and uses flame elemental attacks. It will also use its black scale dust to inflict explosive/Blastblight damage. In this state these are the attacks it will use (uses ones above still):

Teostra can be a tough fight, especially since it deals fire and explosion elemental damage. If you go into this without being adequately prepared, you will more than likely die. With that being said, Teostra can be managed pretty easily with proper preparation. Here’s how to prepare for the Teostra fight:

The Teostra α Set on a female hunter.

The Teostra β Set on a female hunter. 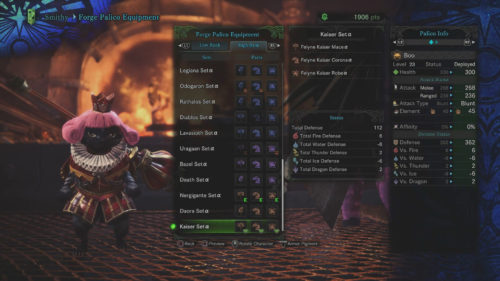 This is the Kaiser Set on my Palico.

This concludes our Teostra guide. Wish to add something? Drop a comment in The Pit below.