After killing Nergigante, you will learn about three Elder Dragons that are now terrorising the various areas of the New World. Since we are monster hunters, it’s our duty to find them and kill them. To do this, you will need to search the Ancient Forest, Wildspire Waste, and the Rotten Vale for clues that will unlock each monster’s mission (similar to what you did with Nergigante). The Elder Dragon you unlock in the Rotten Vale is called Vaal Hazak, and it specializes in using Effluvia (toxic gas) . To help you slay this Elder Dragon, use our Vaal Hazak Guide below. 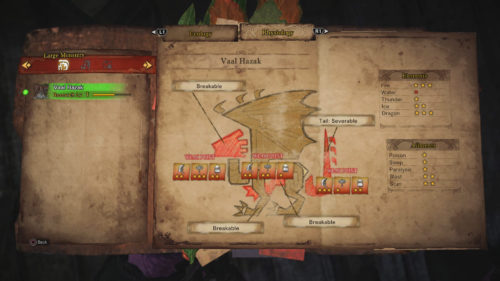 This is the Vaal Hazak Physiology report. 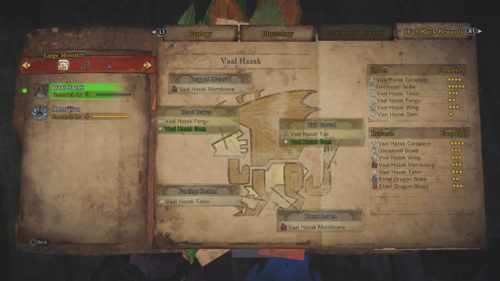 Hunting Quest Text: I’m absolutely positive that the effluvium is controlled by Vaal Hazak. Now to prove my theory once and for all. Go to the vale and seek out Vaal Hazak!

Characteristics: A grotesque elder dragon that inhabits the deepest part of the Rotten Vale. It uses the fatal vapor of the vale in what appears to be a symbiotic relationship.

Useful Information: Once you’ve become tainted, inhaling the vapor of the vale causes your own health to drain. Head for areas where the vapor is thin, and if you do get tainted, do your best to get rid of it.

Roar: Large monsters have the ability to roar. This ability disrupts whatever action the hunter was doing (stun locks you briefly).

Effluvia: Effluvia is the toxic gas you find in Rotten Vale. This gas slowly affects you until it triggers, causing you to lose half of your total health instantly while also gradually decreasing your remaining hp. To cure Effluvia build up, use a Nullberry.

Of all the elder dragons, I find Vaal Hazak to be the easiest. The fight itself largely comes down to managing the Effluvia build up, which is pretty easy if you come into the fight with Nullberrys in your inventory. With that aside, there are only a few attacks your really need to watch out for and I’ll highlight them below.

Managing the Effluvia build up is the key to winning this fight. Bring along a ton of Nullberrys and healing items to ensure you are prepared. Besides that, Vaal is similar to a lot of dragons you’ve fought up to this point and has similar moves.

The Vaal Hazak α Set on a female hunter.

I’ve been grinding for the Vaal Set because look at it!

Human: All Materials are Val Hazak Carves/Drops unless noted. 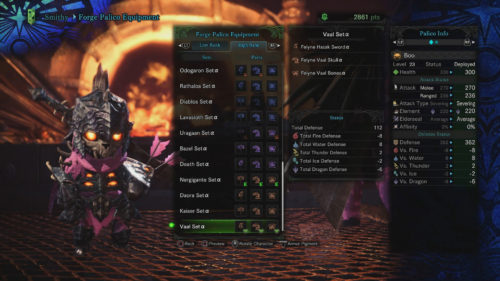 The Vaal Set on my Palico.

Palico: All Materials are Vaal Hazak Carves/Drops unless noted.

This concludes our Vaal Hazak guide. Wish to add something? Drop a comment in The Pit below.