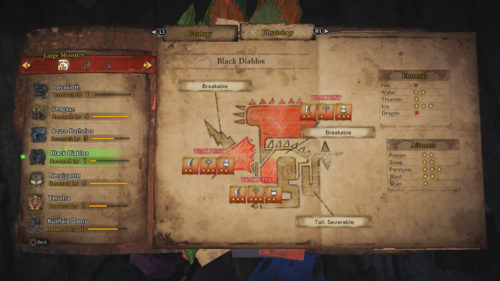 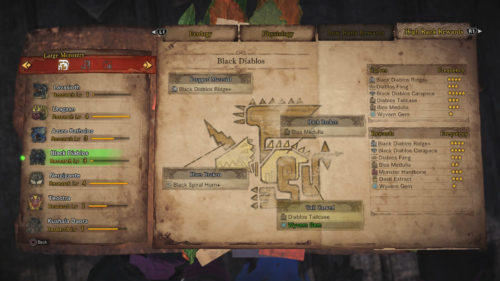 Characteristics: These black-shelled Diablos are actually female Diablos in heat. The color signals their aggressiveness and heightened hostility to other creatures in their habitat.

Useful Information: Diablos are much more aggressive against intruders when in heat, and are known to attack enemies in retreat. Do not let you guard down even if you think you’ve established a safe distance from these monsters.

Stun: Black Diablos can attack and stun the hunter. This seems to occur most often when it charges. You need to either wait to be hit (by an ally or enemy).

Black Diablos has similar attacks to the Diablos, but is way more hard hitting than it’s more docile counterpart. Here are the attacks it will use:

This is easily one of the hardest monster you will face in MHW (like Nergigante level frustrating). The Black Diablos is fast and incredibly hard hitting (it can one shot you with one of its attacks). Without proper preparation it is pretty easy to lose and lose often, so hopefully I can help alleviate some of the problems.

Human: All Materials are Black Diablos Carves/Drops unless noted.

This concludes our Black Diablos guide. Wish to add something? Drop a comment in The Pit below.