Deviljho is was recently added in Monster Hunter World  through the Spring Patch which brought with it a number of changes and tweaks to the game. This new monster is a staple of the Monster Hunter series and often times appears mid-quest to make hunts far more interesting. To help you take down this beast, use our Deviljho guide below. 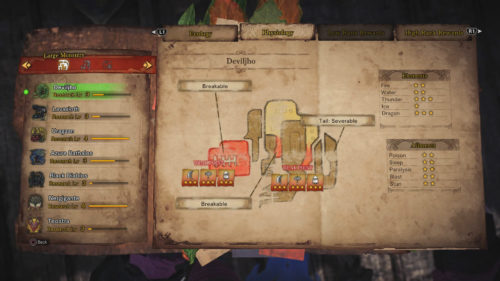 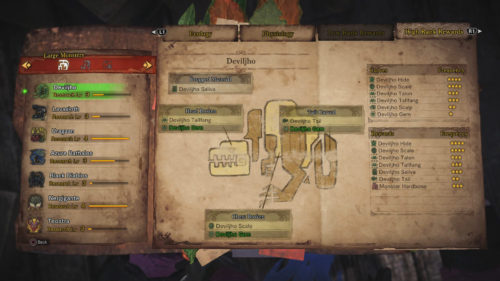 Hunting Quest Text: The Deviljho is a frightening presence that takes the idea of the food chain and crushes it between its massive jaws! Now it’s here in the New World. It’s time to get investigating!

Characteristics: Due to its enhanced metabolism, Deviljho must constantly seek out prey. It is extremely violent, and known to snatch up large monsters in its powerful maw and flail them around.

Useful Information: When enraged, Deviljho’s swollen muscles glow a hellish red. It will start spewing a sweeping dragon element attack, so watch your distance. Deviljho stays on the attack even when wounded, but don’t give up; keep fighting and you’ll come out on top.

Tremor: Deviljho is a large monster who can make the ground shake. These tremors stun hunters without proper decorations equipped.

Dragonblight: Deviljho can deal the dragonblight status effect with its reddish flame it shoots. This status effect nullifies the elemental properties of your weapon. The dragonblight effect is displayed by a purple footprint looking icon above the hunter’s health bar. To cure this effect, use a Nullberry.

Deviljho is the first new update monster to hit Monster Hunter: World, and it should be fairly well known to those of you who have played previous titles in the Monster Hunter series. Affectionately nicknamed “the pickle”, Deviljho is a large monster that can be a tough monster to fight. Deviljho has two forms (hungry/eating), with each forming bringing a number of different attacks to the fight. Let’s take a look at Deviljho’s attacks:

Normal Form: The hungry form of Deviljho is the normal form you will find the monster in. To tell when it is in this form, you will notice a lack of red glow emitting from the monster’s body. Another thing to keep in mind in this form is that Deviljho will be less aggressive than in its normal form (only a little bit).

Enraged Form: Deviljho’s backstory is basically that it needs to constantly be eating in order to survive. This means that midfight, you may have it run off to eat other monsters. In the eating state, Deviljho wields its prey like a weapon, keeping it locked in its jaws. You will also notice that Deviljho begins to glow red sometimes. This is its enraged from. When red, Deviljho becomes incredibly aggressive.

Deviljho is definitely a tough fight. This monster is huge, mobile and almost always aggroed. This makes the fight a bit of a pain as it can cover seemingly huge areas with ease and often deals damage just by moving around. With that being said, here are a few tips to make the Deviljho fight a little bit easier. 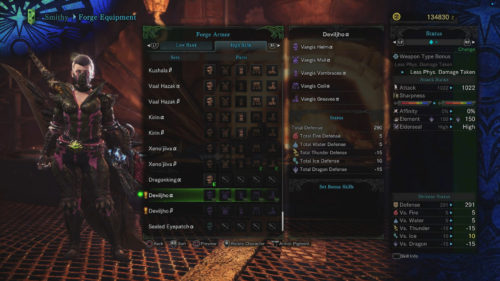 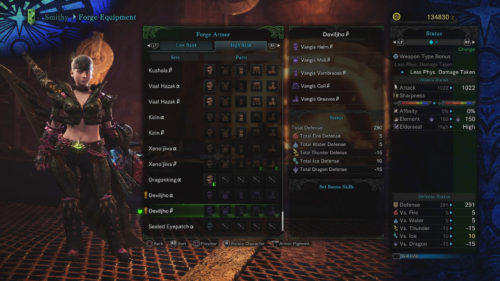 Human: All Materials are Deviljho Carves/Drops unless noted.

Palico: All Materials are Deviljho Carves/Drops unless noted. 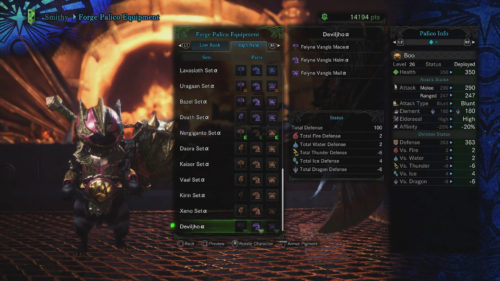 This concludes our Deviljho guide. Wish to add something? Drop a comment in The Pit below.