When Does The Secrets of Greece Mission Unlock? 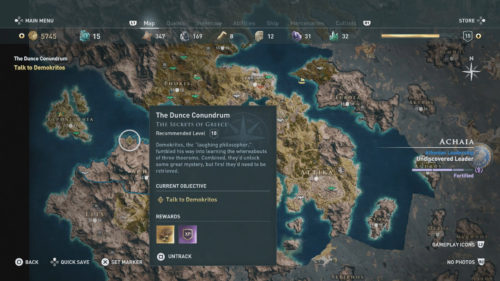 After you complete the story mission, The Big Break, you will unlock The Secrets of Greece mission.

Demokritos, the “laughing philosopher,” fumbled his way into learning the whereabouts of three theorems. Combined, they’d unlock some great mystery, but first they’d need to be retrieved.” 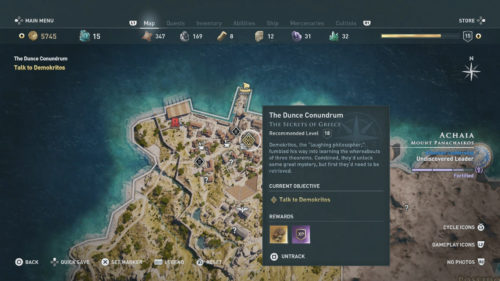 Head to Patria in Achaia to start this mission. 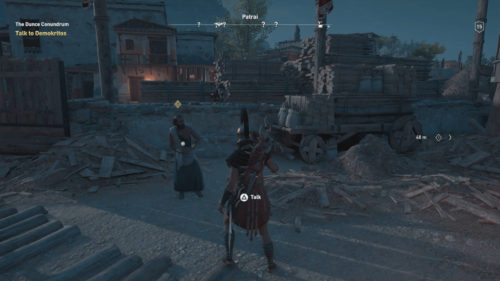 You will find Demokritos in the shipyard.

Once you feel like you are well levelled, you may want to start The Secrets of Greece mission. To do this, make your way to Patrai in Achaia. In the city you want to talk to a man named Demokritos. You will find Demokritos by the Shipyard in beside a half finished ship. Speak with him to start your mission.

When you talk with Demokritos, he will talk with you about three divine mathematical discoveries (theorems). By collecting all 3 theorems, Demokritos will be able to unlock the secrets of the universe and reward you handsomely for you efforts. The 3 theorems he wants are:

Let’s get all 3 theorems.

Objective 2: Locate and Collect the theorems

Now that we know what Demokritos wants, it’s time to gather the 3 theorems for him. I will show you the locations of each theorem below. 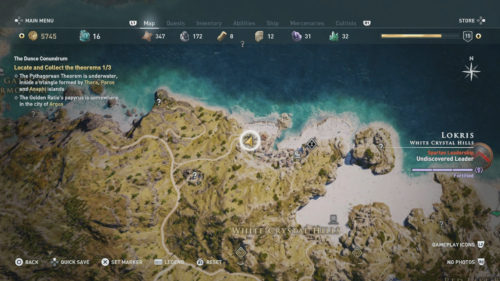 Head to this location in Lokris to find the shrine. 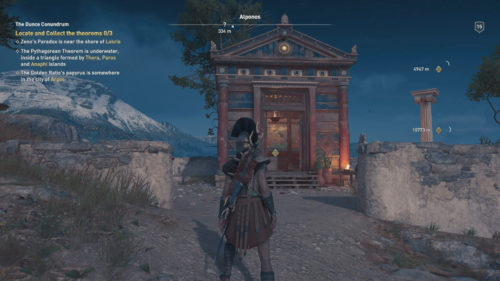 Inside this shrine on the hill is the Zeno’s Paradox.

The first theorem we will grab is the Zeno’s Paradox. This theorem can be found near the shore of Lokris. Lokris is directly east of Phokis. Head to that area now and make your way to the north coastline and the town of Alponos (see map). In Alponos  make your way to the shrine on the hill to the west of town. Inside the shrine is the Zeno’s Paradox.

You will find the workshop and the Golden ratio here. 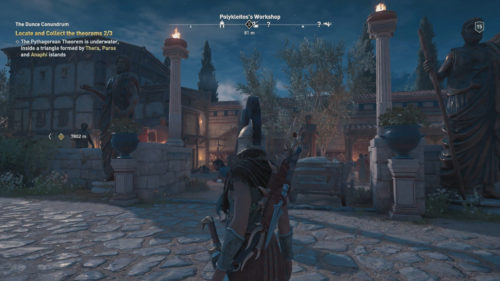 Go inside the workshop to find the Golden Ratio on a bench. 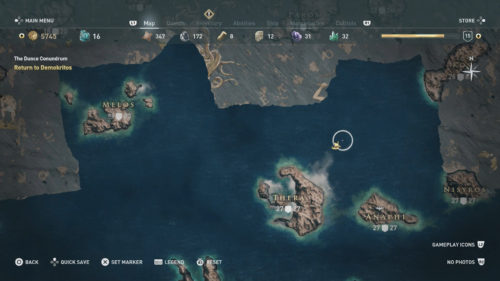 Head to this location and dive. 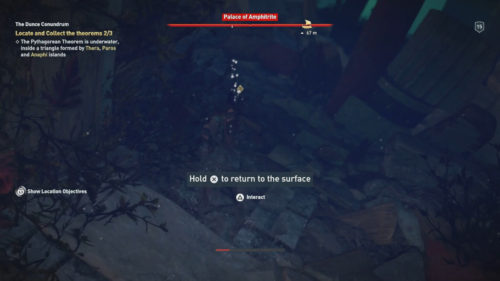 You will need to dive in this area to loot the box with the theorem in it.

The final theorem we are going to grab is the Pythagorean Theorem. This theorem is bit trickier than the last two and requires taking you ship out on the seas. Once you have your ship, head to the islands of Thera, Paros and Anaphi. To the north of these three islands you will find the underwater Palace of Amphitrite. In the center of this dive site you will find the Pythagorean Theorem in a lootable box. WATCH OUT FOR SHARKS DURING THIS DIVE. 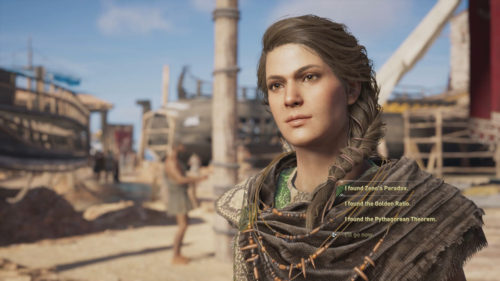 When you have all three theorems, return to Demokritos.

Now that we have all three theorems, it is time to return to Demokritos. When you speak to Demokritos he will give you a bit of information on each theorem. Demokritos will then tell you about his final theorem which has to do with the universe. This theorem has to do with impressing a girl. This will trigger the Another Kind of Poetry mission. For completing The Secret of Greece you receive:

The real rewards are gained by completing the much higher levelled Another Kind of Poetry Mission.

Check out our guide for the pre-order bonus mission The Blind King.

What did you think of my The Secrets of Greece guide? Let me know in The Pit below.