In Monster Hunter: World, you hunt a variety of monsters. Some monster you fight like land, others like the air, while some like the water. Jyuratodus falls into the latter camp and can be found in swampland in Wildspire Waste. To track this beast, look for the Sticky Mud and Footprints it leaves around the map. To learn more about Jyuratodus, check out the Jyuratodus guide below. 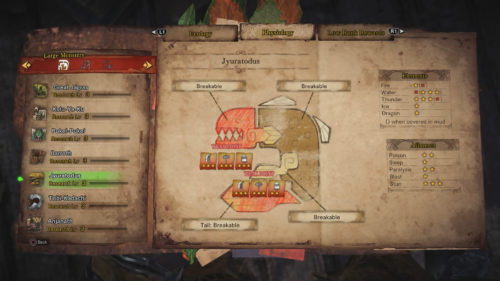 Jyuratodus Physiology features a breakable head, tail, fin and back. 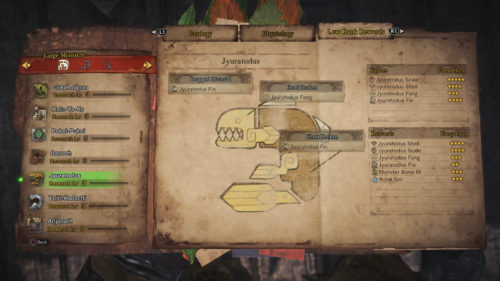 These are the Jyuratodus Low Rank Rewards. See what Jyuratodus drops! 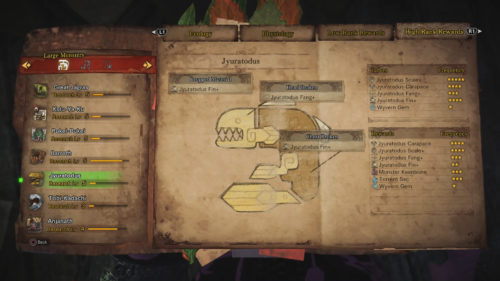 Hunting Quest Text: “A young scholar has gotten separated from his escort out in the Wildspire Waste. Find him and escort him back to base. Neutralize any large monsters that pose a threat.”

Characteristics: A large piscine wyvern that inhabits the swamps of the Wildspire Waste. It uses mud to capture prey, and it’s known to battle Barroth over territory.

Useful Information: It’s nearly impossible to fight a Jyuratodus in its swampy home. Coerce it to land, and then use water element weapons or you slinger to slowly chip away at its hardened mud armor.

Another aspect of the mud mechanic is how it affects the hunter. Jyuratodus has a number of ways of delivering mud throughout battle areas. The first is a spit (rears up and spits out mud blobs), the second is a tailwhip, and the third is when the mud falls off after a coating. Regardless of how the mud appears, it will encase the hunter and make movement difficult (simply roll out to escape)

Waterblight: Jyuratodus can inflict the Waterblight status effect on Hunters. This status effect causes the hunter’s stamina to regain more slowly. While under the effect, a water droplet appears above the players health bar (two appear for Severe), and the stamina bar turns blue. Use a Nulberry to cure the effect.

Depending on whether or not Jyurtados is in water will determine the attacks it uses. In water is has a much larger tool kit than on land.

This fight can be a bit of a pain, especially during the quest Sinister Shadows in the Swamp quest, since you won’t have an elemental weapon. However keep in mind that Jyuratodus is much easier to handle out of the water so bait it onto land for an easier battle. Other tips I have for you: 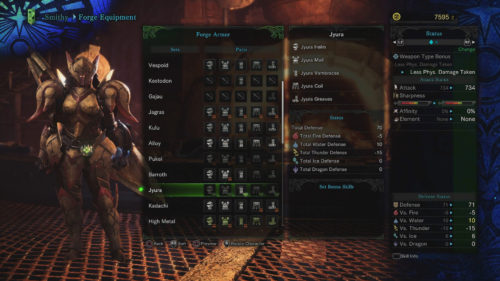 The Jyura Set on a female hunter. 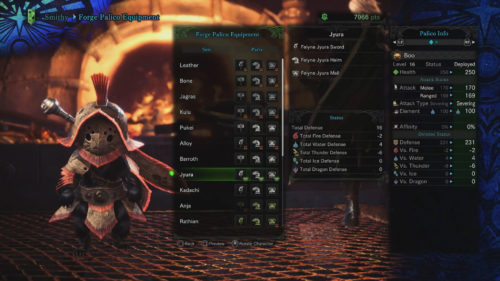 My Palico in the Jyura Set.

The Jyura α Set on a female hunter.

The Jyura β Set on a female hunter.

The Jyura Set α on my Palico.

This concludes our Jyuratodus guide. Wish to add something? Drop a comment in The Pit below.