The Tobi-Kadachi is a large, flying squirrel like lizard you will face during the main storyline of Monster Hunter: World. This creature can be found in Ancient Forest where it like to climb trees. To track this creature, look for its Body Hair and Footprints. To learn more about this creature and how to kill it, check out our Tobi-Kadachi guide below. 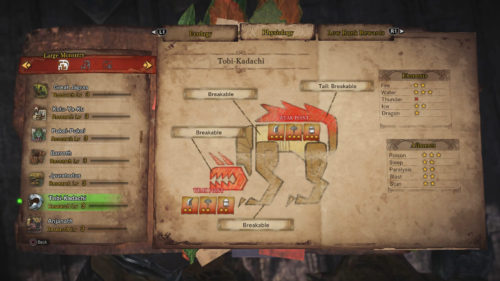 This is the Tobi-Kadachi Physiology report. You can see the weak points, and breakable/severable parts here. 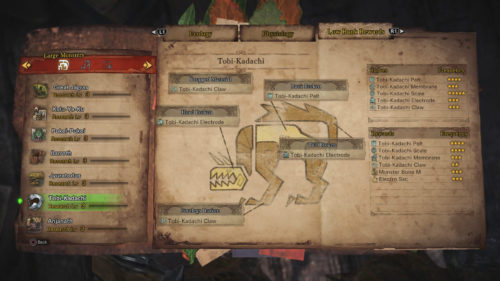 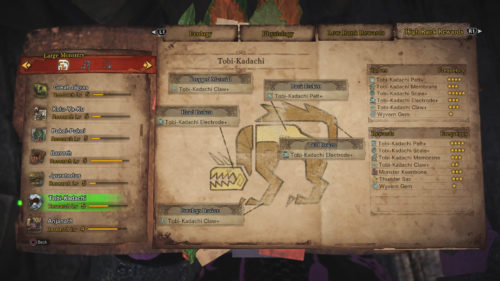 Hunting Quest Text: “Oh, My! That Tobi-Kadachi sure is getting in the way of progress! You hunters will never get a hold of these specialized tools I’m making if I become its Dinner!”

Characteristics: A fanged wyvern tha flies among the trees of the Ancient Forest. Its penchant to brush against the ground and the trees as it moves around builds up static electricity within its fur.

Useful Information: Use the target camera to avoid getting ambushed from behind as it moves from tree to tree. The key to defeating this monster is to immobilize it and prevent it from reaching a charged state.

Thunderblight: Tobi-Kadachi can cause Thunderblight status effect to the hunter. In this state, players are more likely to become stunned. When afflicted, you will see a lightning bolt above the hunter’s health bar. To reverse Thunderblight, consume a Nullberry, roll seven times, or get hit by an attack.

Tobi-Kadachi is very mobile and fast moving, which makes its attacks incredibly hard to dodge. With that being said, the creature only possess a small pool of attacks, so if you can learn its attacks, you’ll be okay. Let’s take a look at the monster’s attacks below.

Note: When charged, Tobi-Kadachi deals Thunder element damage with its attacks, while also being able to Thunderblight you.

Tobi-Kadachi is a tough fight as it is incredibly mobile and hard to keep track of. Here are a few tips to help with the fight: 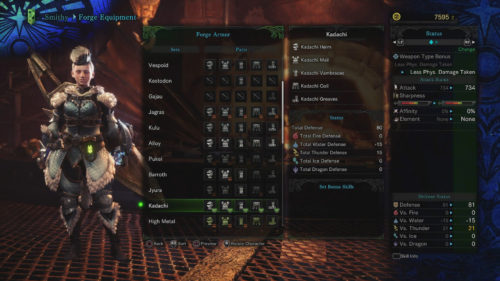 The Kadachi Set on a female hunter. 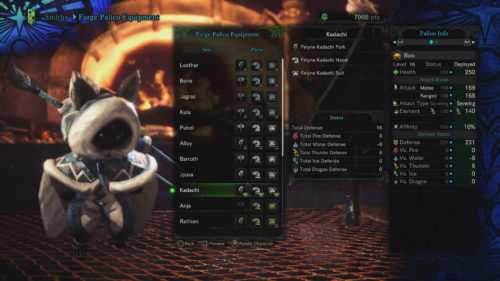 The Kadachi Set on my Palico.

Human: All Materials are Tobi-Kadachi Carves/Drops unless noted.

Palico: All Materials are Tobi-Kadachi Carves/Drops unless noted.

The Kadachi α Set on a female hunter.

The Kadachi β Set on a female hutner

Human: All Materials are Tobi-Kadachi Carves/Drops unless noted.

The Kadachi α Set on my Palico.

Palico: All Materials are Tobi-Kadachi Carves/Drops unless noted.

This concludes our Tobi-Kadachi guide. Wish to add something? Drop a comment in The Pit below.