Another flying wyvern you will face in Monster Hunter: World, is Rathalos. Located in the Ancient Forest, this “King of the Skies” is capable of dealing both poison and fire damage, making this fight pretty tough. If you choose to track down this beast, you can do so by following the trail of Gashes and Scales it leaves throughout the area. To help you take down this beast, here’s our Rathalos guide. 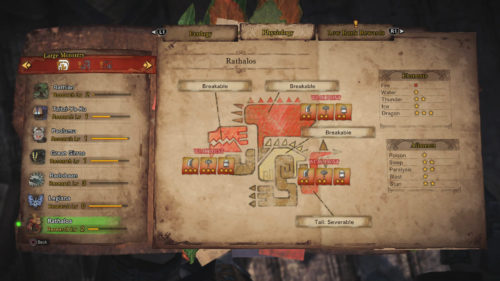 Rathalos Physiology can be viewed in this picture. Here you can see weak spots, as well as what’s severable/breakable. 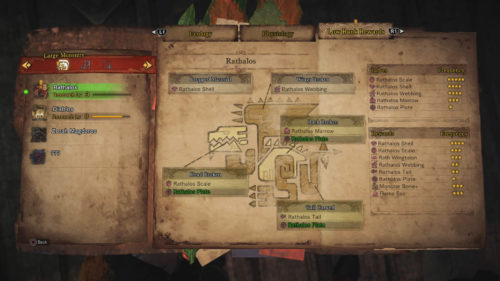 Check out the Rathlos Low Rank Rewards report in this picture. 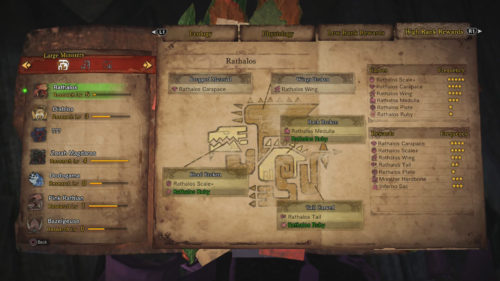 These are the Rathalos High Rank Rewards.

Storyline Quest:  A Fiery Throne Atop the Forest

Hunting Quest Text: “The First Wyverian’s not gonna spill the beans about Zorah until we stand on top of the food chain. That means we gotta hunt us a Rathalos!… Does that mean we have to eat it too?”

Characteristics: The apex monster of the Ancient Forest, also known as the “King of the Skies.” A terrible wyvern that descends upon invaders, attacking with poison claws and fiery breath.

Useful Information: Rathalos prefer to stay airborne to unleash their myriad of attacks, but a well-placed flash bomb or a shot from your slinger can send them crashing to the earth. Wounding their wings gives them a moment of vulnerability whenever they try to take flight.

Fireblight:  When being afflicted with Fireblight, a small flame will appear over the hunter’s health bar (two for Severe), and the red health bar will turn red and begin to decrease. To cure this affliction, simply roll into water once, roll on the ground three times, or consume a Nulberry. When the Rathalos’s mouth has flames in it, you know fire attacks are coming.

Fighting Rathalos can be a major pain, and is easily one of the hardest monsters you’ve faced up to this point. Rathalos has a collection of moves it will use to crush you, so let’s take a look at them.

Rathalos can be a tough fight. The monster is fast, mobile, and likes staying airborne during much of the fight. Here are a few tips to help make the fight a bit easier. 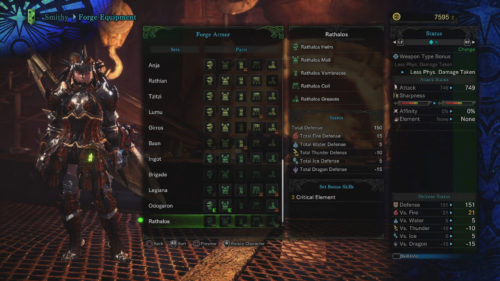 The Rathalos Set on a female hunter. 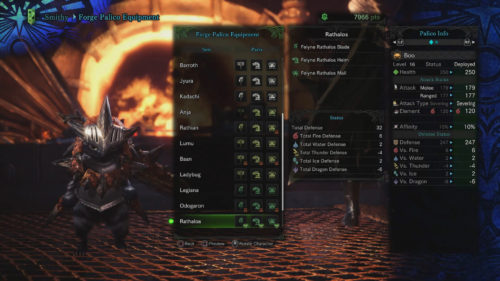 The Rathalos Set on my Palico.

Human: All Materials are Rathalos Carves/Drops unless noted.

Palico: All Materials are Rathalos Carves/Drops unless noted.

The Rathalos α Set on a female hunter.

The Rathalos β Set on a female hunter.

Human: All Materials are Rathalos Carves/Drops unless noted.

The Rathalos Set α on my Palico.

Palico: All Materials are Rathalos Carves/Drops unless noted.

This concludes our Rathalos guide. Wish to add something? Drop a comment in The Pit below.