After completing trial two, you will be sent to Royal Avenue. Here you will learn about trial three: the Wela Volcano. This trial is a bit different than other trials you have done up to this point, as it only consists of a Totem battle. Regardless, here is our Pokemon Ultra Sun and Ultra Moon Wela Volcano trial guide.

As you can probably guess, Wela Volcano is fire oriented (Marowak), so make sure your party is prepared. Ideally you should have at least one water type, maybe two (or alternatively a grass type). 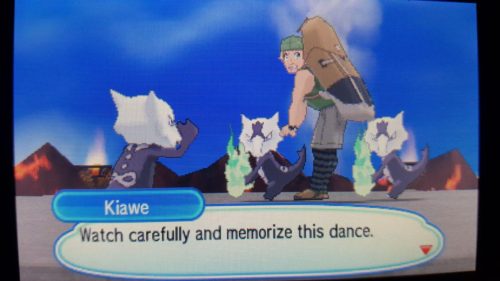 The first portion of the trial involves watching two sets of three Marowaks dance and then tasks you with determining the difference between the two dances. Failing to answer correctly results in a battle against a Marowak. In total, being incorrect results in two fight cycles (as long as you pick a different answer each time). For the sake of potentially saving you time, my answer was Middle Marowak. This will trigger a final fight with the Marowaks.

After completing the first round, you will be tasked with completing a second round of the same game. This time, there will be a Hiker in the frame. The Hiker doesn’t smile in the first picture, but does in the second. That’s the difference. This will trigger a fight against the Hiker.

Defeating the Hiker triggers the Final Dance. In this dance, there is an Extra Marowak in the final dance. This is the Totem Pokemon. 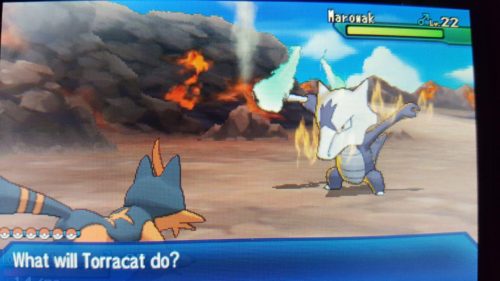 Totem Marowak is a bit of a pain to fight. This is easily the hardest battle you have faced up to this point and will require a bit of strategy to win. The best advice I can give you is to utilize the Water Z stone to tip the battle more in your favor. Another suggestion is to kill any Pokemon Totem Marowak summons as soon as possible. This will make things way easier.

After defeating Totem Marowak, you will receive Firium Z, 10 Quick Balls, and Charizard Ride. With Firium Z in hand, we can continue the storyline. Hooray!

This concludes our Pokemon Ultra Sun and Ultra Moon Wela Volcano trial guide. Hit us up in the Pit below with any comments you have.