Finally Played It #1: Beyond Good and Evil Review

What is Beyond Good and Evil?

Beyond Good and Evil was released way back in 2003, by Ubisoft. In the game, players control Jade, an action reporter who gets caught up in a conspiracy surrounding the suspicious inability of her government to repel alien invaders. Armed with nothing but her camera, dai-jo staff, and her friend Pey’j, Jade uncovers far more than she bargains for.

Beyond Good and Evil is Old 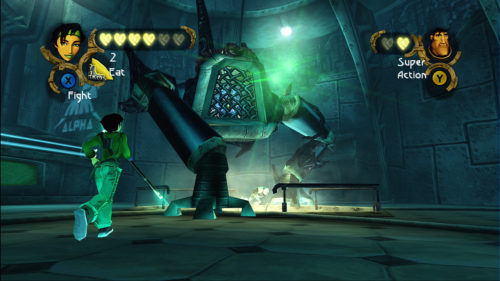 Before I dive into my experience with Beyond Good and Evil as a game, it should be noted that this game is old. Now this isn’t necessarily a bad thing, getting Beyond Good and Evil to run smooth on PC is a bit of an experience. When i first booted up Beyond Good and Evil, I was met with abysmal frame drops. Like we are talking Power Point Slideshow level drops. A quick Google, led me to a fix, but then a new problem emerged, artifacting. Long story short, I played through Beyond Good and Evil‘s opening sequence multiple times before hitting that buttery performance area. In no way does this detract from the game itself, but you should know that there requires a bit of internet leg work to get the game running (on PC at least).

Part of your time is spent in the Hovercraft

The other part of your time will be spent facing off against weird aliens on foot.

Like other games in the adventure genre, Beyond Good and Evil features a hub world, with individual areas acting as levels. My immediate reaction to the overworld design was comparing it to something like Diddy Kong Racing, or Super Mario 64. Both the hub world and each level feature a good level of activities to undertake including races, air hockey battles, exploration, and boss fights. As you explore both the hub world and levels, you collect Pearls, the life blood of Beyond Good and Evil. 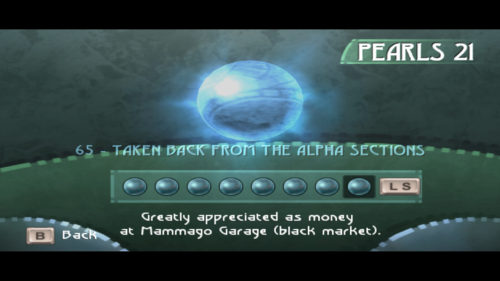 Pearls are the primary method of upgrading your Hovercraft. These upgrades come in the form of speed, jump, or firepower. By unlocking new upgrades, you are able to access more parts of the hub world and subsequently, more new levels. As you unlock new levels, you progress deeper into the story. This system works fairly well and boasts a whopping 88 Pearls in total to collect. If you like collecting things, Beyond Good and Evil does a good job scratching that itch.

Overall I think the gameplay in Beyond Good and Evil is pretty strong and is the main element I found to be the most appealing. Ubisoft does a good job of throwing a bunch of different activities at the player, which keeps combat and exploration fresh. If I ever felt bored, I would spend time collecting Pearls through other activities.

Sound in Beyond Good and Evil was pretty hit or miss for me. When there was voice acting, the characters emoted well and felt real. Unfortunately the game is only probably 50% voice acted, which creates somewhat strange interactions outside of cutscenes. When a pivotal character ‘dies’ in game, it was strange to have the emotional cutscene being followed by simple text. While not a huge problem, it was definitely more jarring of an experience to play in 2017.

In terms of the soundtrack, the OST is average. I would say it does lack any really memorable tracks (take a listen above), but the soundtrack gets the job done and is not annoying, so that’s a plus. 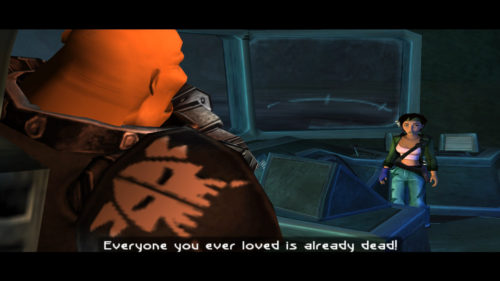 This will probably be the most controversial part of the review as I have been hearing how beloved this story is, but in all seriousness, the storyline of Beyond Good and Evil just ain’t that good. Throughout my 12 hour playthrough, I often found myself confused over who was doing what, and why exactly they were doing the things they did. This is especially noticeable in how the villains are handle, as they basically appear in the last hour and are immediately dismissed. Without a foreboding threat throughout the main story, I never really felt all that worried about the fate of the Hillys. 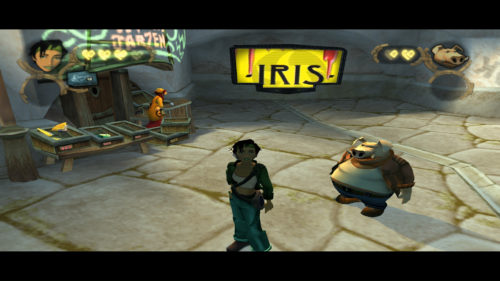 One story aspect I did like was the sheer amount characters that inhabit the world. There are a ton of NPCs to meet and talk to about the problems in Hillys and all of them are unique. This made the world feel real and interesting. The NPCs you meet can also be quest givers, which means talking to everyone is definitely beneficial to you.

Ubisoft delivers a rich, character filled world, but fails at delivering the epic scale story they hope to tell. This could’ve been alleviated with better villains and more information for the players, but instead I felt underwhelmed with having the fate of the world in my hands.

Like many games created in the early 2000’s, Beyond Good and Evil has some wonky controls and camera work. Controls for the most part work fairly well, but I did have a few moments where the game either decided to eat my input or make an input for me. This often led to deaths which made me a bit frustrated.

Controls aside, the camera in Beyond Good and Evil is also pretty bad. There are times when it works well and the player has control over it. There are other times when the game locks the camera in these awful angles. Furthering the camera issues is using the actual camera mechanic in game. For some reason, using the actual camera in game resulted in high sensitivity. This meant aiming was absolutely horrendous. I found a small push on the control stick would move the reticle further than intended.

Both the controls and camera had me questioning whether to continue playing Beyond Good and Evil. I’m glad I stuck it out, but I could totally see people getting fed up and quitting. The game controls poorly at times and the camera is super janky.

– Lack of voice work during some pivotal moments

– Game is old and takes some work to run

Do you agree with this Beyond Good and Evil review? Let me know in the Pit below.