Dodogama is another large monster you will face off against in Monster Hunter World. The creature is considered to be of the Fanged Wyvern species, and it has somewhat of a salamander like appearance. Dodogama is known for eating rocks which when combined with its saliva, become explosive projectiles. Judging by the creatures look and ability, it is possible that this creature is a reference to OOT’s Dodongo. To learn more about Dodogama, check out the Dodogama guide below. 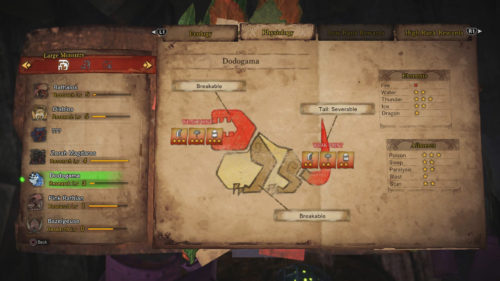 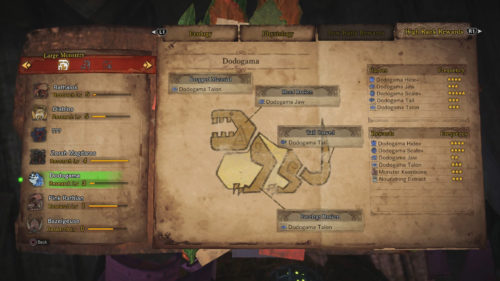 Characteristics: A monster that devours rocks as its primary diet. The crystals it devours mix with its saliva to produce explosive minerals that it can spit at its enemies.

Useful Information:  Dodogama collects explosive minerals in its mouth, but doing so weakens its massive jaw. Causing the minerals to detonate while they’re still in Dodogama’s mouth will create a great opening for an attack.

Blastblight: Dodogama can deal the Blastblight effect. This effect gradually builds up over time until an eventual explosion occurs. To rid yourself of the Blastbight effect, you will need to roll three times.

Dodogama is similar in design to Great Jagras, but posses more range attacks thanks to the rock eating it is capable of. With that being said, if you treat the fight the same, you shouldn’t have much trouble.

Since Dodogama is similar to the Great Jagras in design, you can use a similar approach to this fight (with a few changes). Here are some tips to slay Dodogama.

The Dodogama α Set on a female hunter.

The Dodogama β Set on a female hunter.

This concludes our Dodogama guide. Wish to add something? Drop a comment in The Pit below.