When you arrive in the High Rank area of Elder’s Crossing, you will be greeted by Uragaan. Uragaan is basically a High Rank version of Radobaan, who is covered in metal instead of bone. Fighting this beast can be a bit of a pain, but this Uragaan guide will help you. 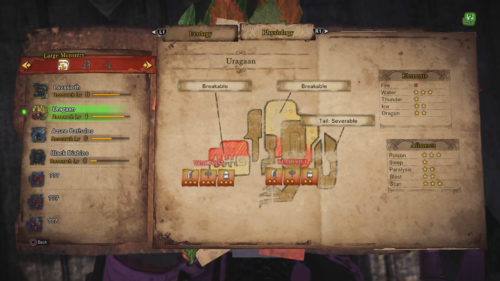 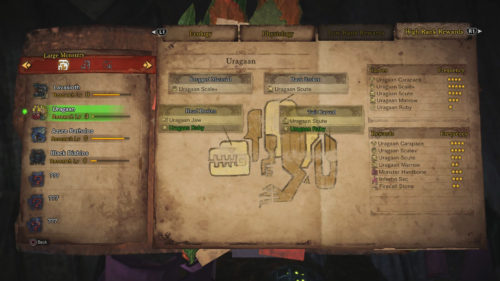 Useful Information: A crushin slam from the Uragaan’s jaws can send shockwaves across the ground, detonating any explosive rocks in the area. In addition, when an Uragaan is toppled, its body can be mined for ore.

Ore Armor: When you first see Uragaan, you will immediately notice all the ore stuck to its outer shell. These ore serve armor (like Radobaan). With the ore on the exterior, you either need to knock Uragaan over (to attack its unprotected underside), or wait for it to tire out and fall over to deal that serious damage.

When on its side, you can gather the ore off of Uragaan’s back by going up to it and pressing gather. This will cause your hunter to mine the back like a mining spot you’d find throughout areas.

Exploding Ore: Uragaan scatters exploding ore around the arena when it uses various attacks. These ore lay dorminant, but can be triggered by Uragaan attacks or running into them as a hunter. This mechanic is similar to Bazelgeuse’s exploding scales and should be avoided wherever possible.

Sleep: Uragaan has the ability to cause sleep to players by releasing a sleep gas. This status effect causes nullifies hunter action and causes them to take more damage. To wake up, players either need to be hit by a friendly, hit by a monster, or have enough time pass. The sleep effect is denoted by a ZZZ above the health bar.

Uragaan has a number of attacks and tools to use versus the hunters. It also has the ability to cause a couple of status effects which makes the fight even more difficult. Let’s look at this monsters kit:

Uragaan’s ore armor makes this fight somewhat annoying. With that being said, there are a number of tips I can give you in hopes of making this fight a little better.

The Uragaan α Set on a female hunter.

The Uragaan β Set on a female hunter.

The Uragaan Set α on my Palico.

This concludes our Uragaan guide. Wish to add something? Drop a comment in The Pit below.