When you enter the High Rank portion of Monster Hunter: World, you will start to see a number of new monsters across all the locations. One of these new monsters is Bazelgeuse. Bazelgeuse is a flying Wyvern who scatters explosive scales as it flies about the area. To hunt yourself a Bazelgeuse, use this hand Bazelgeuse guide. 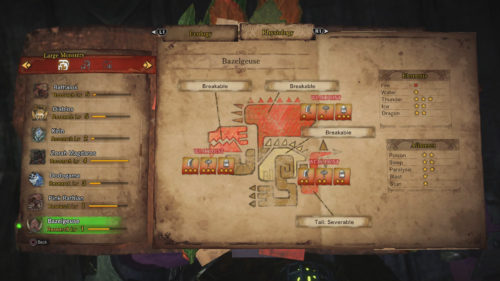 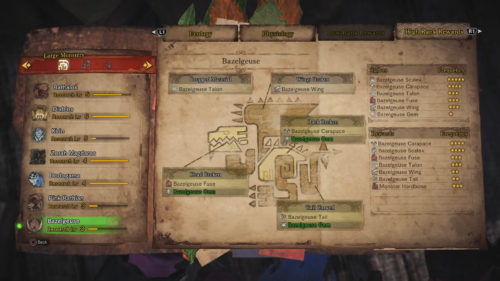 Characteristics:  A nefarious flying wyvern that travels the New World in search of prey. It scatters explosive scales over a wide area to prey on whatever gets caught in the blast.

Useful Information: The scales of that Bazelgeuse scatters explode with tremendous force, making them extremely deadly. Focus on its legs to knock it down, and then knock out its scale-generating organs.

Fireblight:  When being afflicted with Fireblight, a small flame will appear over the hunter’s health bar (two for Severe), and the red health bar will turn red and begin to decrease. To cure this affliction, simply roll into water once, roll on the ground three times, or consume a Nulberry.

Exploding Scales: Bazelgeuse sheds its scale when it attacks which explode to deal AOE damage. The scales glow red when they are about to go off.

Bazelguese is similar to other dragons you have found up to this point, but possess the ability to shed its scales. This ability can deal a ton of damage, but aside from this, the fight itself should be fairly simple. Let’s look at Bazelguese’s attacks:

Bazelguese is a relatively easy fight when it’s just you versus it, but as you will learn, this monster absolutely loves to appear when you are fighting other monsters. Like, leave us alone to hunt you dumb dragon. Anyways, the big thing with Bazelguese is patience. Don’t stay close for long as the scales will annihilate you. Here’s some other tips:

This is the Bazelgeuse α Set on a female hunter.

This is the Bazelgeuse β Set on a female hunter.

Set Bonus (3 pieces or more) – Bazelgeuse Protection (Guts): Above a certain health threshold, you withstand attack that would normally cart you (once only). 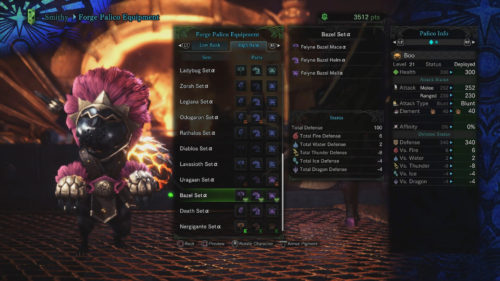 The Bazel set on my Palico.

This Bazelgeuse guide will be updated shortly.