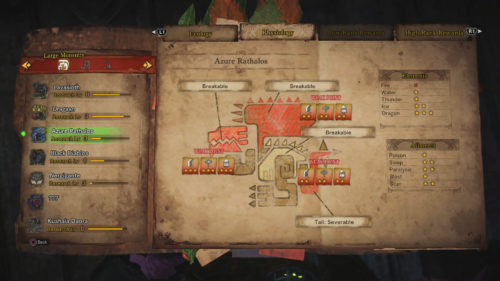 This is the Azure Rathalos Physiology report. 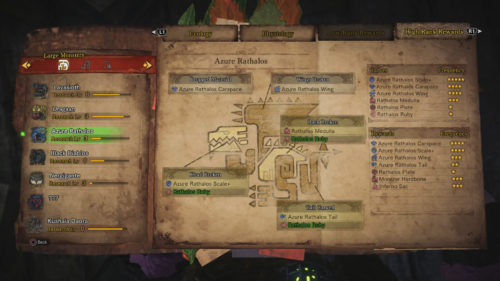 These are the Azure Rathalos High Rank Rewards.

Characteristics: An azure-colored subspecies of Rathalos. More mobile than their standard cousins, they locate prey from the air and quickly swoop in for the kill.

Useful Information: Counter its airborne onslaught by observing its flight patterns and finding the right moment to knock it out of the sky. Once grounded, it loses its ability to perform consecutive attacks, making the fight much easier.

Fireblight:  When being afflicted with Fireblight, a small flame will appear over the hunter’s health bar (two for Severe), and the red health bar will turn red and begin to decrease. To cure this affliction, simply roll into water once, roll on the ground three times, or consume a Nulberry. When the Azure Rathalos’s mouth has flames in it, you know fire attacks are coming.

Fighting Azure Rathalos can be a major pain, and is easily one of the hardest monsters you’ve faced up to this point. Azure Rathalos has a collection of moves it will use to against you and it uses them with lightning speed. Let’s take a look at Azure Rathalos attacks.

Azure Rathalos can be a tough fight. The monster is fast, mobile, and likes staying airborne during much of the fight. Here are a few tips to help make the fight a bit easier.

The Rath Soul β Set on a female hunter.

Human: All Materials are Azure Rathalos Carves/Drops unless noted.

This concludes our Azure Rathalos guide. Wish to add something? Drop a comment in The Pit below.