As a fan of both basketball and the NBA, I typically look forward to the release of a new NBA 2K. As the only real basketball game on the market, the NBA 2K experience is typically lacking due to there being no market competition, but this year really shows how little work is being put into the series. Check out my NBA 2K18 review below.

NBA 2K18 is an NBA simulator/sport game that is available for PC, Xbox, Playstation, and Nintendo Switch.  In the game, players control every aspect of the NBA experience, from being a player on an NBA team, to being a GM, or creating their own dream team to compete against others. 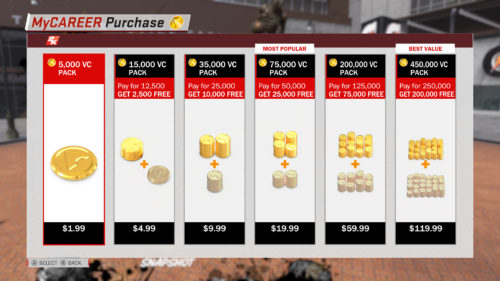 Like NBA 2K games in the past, NBA 2K18 features a heavy emphasis on acquiring VC (virtual currency). This can be done by either playing the $60+ game you’ve purchased, or (as 2K hopes) by buying the currency with real world money. Now I typically don’t have an issue with microtransactions when done well, but the entire NBA 2K18 product is built solely around funneling you towards purchasing VC. While playing 2K18, I got an eerily similar feeling to the monetization approach of GTAO. Seeing as they are both owned by Take Two interactive, it seems this is the mega publisher’s new ‘gaming recipe’.

To highlight the VC sales funnel in action, I will point out a few of the major instances where the push is especially prevalent. The first and most egregious has to be the entire MyCAREER system. Centered around the idea of hitting 99 ovr, the MyCAREER mode tasks you with creating your own NBA character. This character is used for playing both multiplayer and single player modes. This sounds fun and could be fun, but the entire VC system completely destroys the process.

I started MyCAREER as an OVR 60, slashing Point Guard. At OVR 60, you are basically useless. This means when you are out on the NBA court, you have to deal with hours of frustratingly boring play that stems from being a bad player. The first 10+ hours in NBA 2K18‘s MyCAREER mode feel specifically designed to push you towards buying VC. If you do grind it out, the experience becomes slightly better, but this requires hours upon hours of playing.

I played 41 hours (basically 90% of all season games) and made it to OVR 71. No matter how I played, or what I did in game, the amount of VC I earned during my playthrough remained relatively constant. I found I earned roughly 750 VC per 20 min game. Having VC be ‘fixed’ makes the game feel so incredibly gated and unenjoyable. There’s little incentive to actually play the game, as each overall point feels like such a marginal player improvement versus the time needed to invest in that point. Instead of playing the game, 2K and Take Two want players to dump money into VC as a way to circumvent the grind they have created. 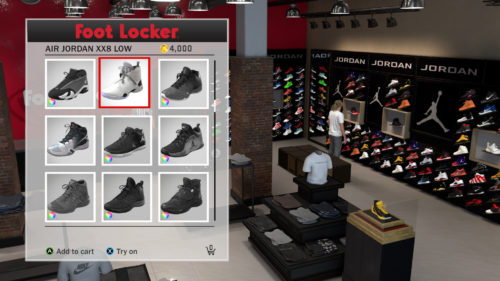 Only need to play 5 games to afford these shoes!

The second VC issue with MyCAREER is that everything costs money and most items aren’t cheap. As the NBA is all about shoes, tattoos, and haircuts, you will understandably want to swag out your MyPLAYER. 2K also realizes this and has made a number of customization items available for that sweet VC. Again this isn’t a bad thing, but the price of most of the items just makes them unappealing to purchase. Want to buy a pair of Jordan XX8 Lows? That will cost you 4,000 VC (about 5 games, or $1.99). 2K has also made it so that items unlock as you level, so things like custom T Shirts (unlocks at 80), won’t even be an option for most players who are just playing the game.

While I thought about creating a complete review on NBA 2K18, I figured it was easier to simply charge $1.99/$2.99/$120.99 for HTRC which can be used to unlock other sections of this review that should be already accessible to readers. If purchasing points doesn’t intrigue you, there is an option to grind out articles for me at a fixed 0.0001 HTRC per 20 mins. Regardless of your choice, I look forward to profiting off of your support of my website!

*Serious* As NBA 2K18 has a monopoly on the NBA video game market, they have begun to venture into predatory practices. From the standpoint of a consumer, this year’s version of the game is easily the worst I have played. If you enjoy grinding for hours upon hours with little advancement, or opening up your wallet to get that tasty new pair of sneakers, this game is for you. If you want to play basketball and have fun, maybe take the $60 you would’ve spent on NBA 2K18 and buy an actual basketball (it will be way cheaper).

Thoughts on my NBA 2K18 review? Let me know in The Pit below.