First announced during Sony’s E3 2017 conference, Monster Hunter: World immediately generated hype in the video game world, as many of the series’ long standing conventions had been reworked to leverage higher available processing power. With more available power, Capcom promised to create a more unique ‘world’ experience, which meant loading screens between hunting zones would be no more. Along with this change, MHW wowed audiences with its new graphical look, advanced AI and physics, and promises of a new, more persistent cooperative multiplayer experience. Further helping create hype was Capcom’s announcement of a PC version of MHW, which would mark the first time the series ever was on PC.

Below you will find our breakdown of the Monster Hunter World  core gameplay elements. These elements include hunting, combat, loot, and story.

Monster Hunter World has a simple premise, but it is incredibly executed. In the game, players are tasked with hunting various monsters across different locales – using whatever weapons and armor they like. When a monster is slain, they drop materials which can then be used to craft new, more powerful weapons and armor which can then be used to hunt more powerful monsters. This is the core gameplay loop and is one I feel Capcom executed very well. 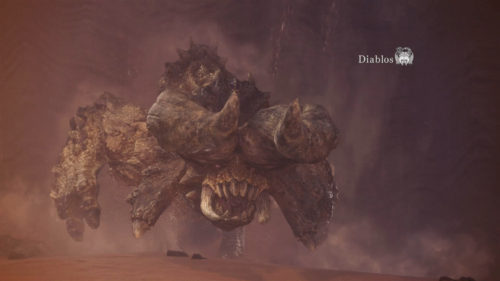 I need to kill that… Ummm.

Hunting in Monster Hunter World is a major gameplay element you will spend a lot of time doing. Each hunt essentially involves heading to a locale; looking for clues in the form of tracks/feathers/other unique markings; and then following the tracks to the monster you will hunt. Once found, how you take down the monster is up to you. I tended to approach each fight head on, with the outcome ending in a kill. In contrast to this approach I’ve seen other hunters use traps and strategy to capture the animal instead. This freedom of approach makes each encounter interesting, even when it’s your nth time farming the creature.

Furthering the variety is the monsters themselves. Each monster is unique in design and moveset. This means that each interaction with a new monster feels different. In the early game you face a monster that picks up a rock and wields it like a weapon; later you face off against a monster that can stun you with its bright flashing flaps. The variety of monsters and hunting approaches really provides an enjoyable gaming experience and is one I’ve happily dumped tens of hours into.

When on a hunt, you will be able to use the game’s combat system. The combat in Monster Hunter World is incredibly misleading in a good way. When you start the game, you feel as though the combat is simple. Each weapon has a base set of simple moves which most hunters will be able to pull off. However, the combat in Monster Hunter World is anything but simple. Beneath the simple combos are a number of hidden combos and mechanics. This gives combat an incredible depth, and rewards those who learn how to use their weapons within the combat system. When you have a grasp of the combat intricacies, you can pull of crazy stuff like this twitter highlight.

Couple these combo/mechanical intricacies with exploiting elemental weaknesses and ailments and you have a deep system that begs you to explore it. I’ve played a ton of Monster Hunter World over this past week and I still find pulling off new combos to be incredibly satisfying. 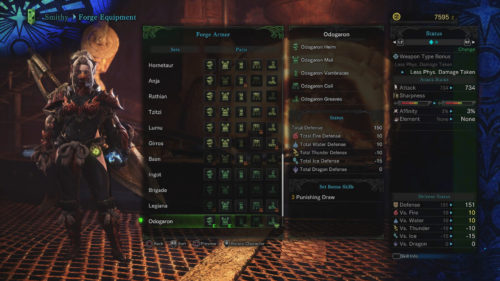 The Odogaron Set on a female hunter.

There is a ton of loot to be had in Monster Hunter World. You start your hunt with access to 14 weapons, which each have their own unique combos and branching upgrade trees (insane amount). You can easily switch between weapons with little hassle, meaning if you get bored of one type of weapon, there are a number of other options available. The same can be said for armor sets. There are a number of sets available with unique properties and looks. I had a blast unlocking new weapons and armor sets. In Monster Hunter World there is always some other shiny thing to chase, and that’s exactly what I want out of a loot based game.

Further complimenting the Loot Loop, are a number of streamlined elements that make getting your gear fairly easy. Menus in Monster Hunter World layout requirements in simple to follow ways, and doesn’t bog down the loot forging process. I also liked that adding items to your wishlist ensures you are constantly tracking your progress towards that next item. This is super convenient and a welcome addition to Monster Hunter.

Of all the core gameplay elements, the story of Monster Hunter: World is easily the worst aspect. It basically boils down to the Research Commision studying the “New World” – a place inhabited solely by monsters. You as a hunter are dispatched from the Old World to offer protection to the researchers who are exploring the New World. While travelling to the New World, you are shipwrecked by a large Elder Dragon who serves as the story’s central antagonist. Unfortunately, I never really found the story went anywhere interesting or worth any emotional investment.

Multiplayer is a large feature in Monster Hunter World, but is one I can’t fully address. Unfortunately I know of only one person who has this on PS4, meaning my ability to try out the party system was seriously hindered. I did try out random matchmaking which worked well, but lacked that ‘fun’ element of killing monsters with your buds. If you want to add me on PSN -> Enricofairme.

Below we look at the technical side of Monster Hunter: World. This includes the graphics, audio, and multiplayer system. (I played this on a PS4 Slim). 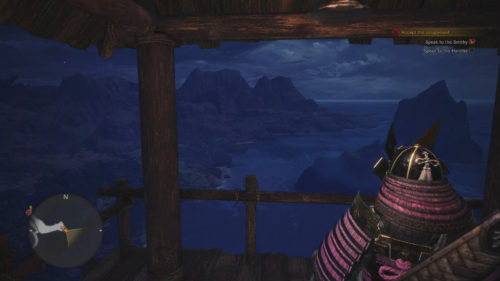 So pretty. Now I need to kill something.

While I think the PC version of Monster Hunter World will look absolutely beautiful, I can say the console versions look really nice as well. From the sprawling visita of Astera, to the unique creature designs, everything pops with a really nice visual look.

Another element of the graphics I appreciated was how smooth the game runs. I never noticed any frame hiccups or slowdowns, even when the game has huge monsters fighting one another.

Overall I was impressed with the graphics on Monster Hunter World. Capcom did a good job on the console edition. I AM SERIOUSLY HYPED FOR TO SEE HOW IT LOOKS ON PC.

Unlike the graphics, I found the audio to be pretty meh. OST wise, the game has a passable soundtrack, but no songs really stood out to me. This is unfortunate, as I feel like a really good OST could really elevate the hunts.

The OST is not the only thing I found disappointing in the audio of MHW, the english voice overs are bad. Characters feel underwhelming when they speak, and there is an insane desync between what is being said and the character’s mouth movement.

Capcom nailed much of MHWs design, but came up a bit short in the audio department. More effort here would have really pushed my review over the top.

Of everything I had an issue with in MHW, the multiplayer technical aspect has to be the worst part of the game. While I appreciate that there is more effort being put on multiplayer, the current system feels incredibly clunky. I attempted to join a friend on his hunt, only to receive errors over and over again. Eventually these errors disappeared and I was greeted with a new roadblock: player needs to have watched cutscene before you can join. Monster Hunter is fun with friends, but the current state of multiplayer really discourages playing with them (I did find joining on randoms to be a breeze).

Naming your game Monster Hunter, implies you will be spending a lot of time monster hunting. With such a blatant gameplay tell, you expect the devs to deliver on the hunting side of things. I can easily say that Capcom has delivered an incredible monster hunting game. The core system of hunting, looting, becoming stronger, and repeating is so well oiled and executed, that you can easily dump an unrealized few hours into the game. This is the epitome of fun. When you lose track of time and simply experience the game.

Although there are some minor flaws, Monster Hunter World is a must play of 2018. Really, it’s incredibly easy to jump in and play. I’ve had a blast playing through the game and will probably play more now that I’ve completed this review.

Thoughts on my Monster Hunter World review? Let me hear them in The Pit below.