Kulu-Ya-Ku is a large, bird like Monster in Monster Hunter: World. This creature is first encountered during the Bird-Brained Hunting Quest. It can be tracked by following the trail of Feathers, Footprints, and Broken Egg Shells it leaves throughout the area. To learn more about the Kulu-Ya-Ku, consult our Kulu-Ya-Ku guide below. 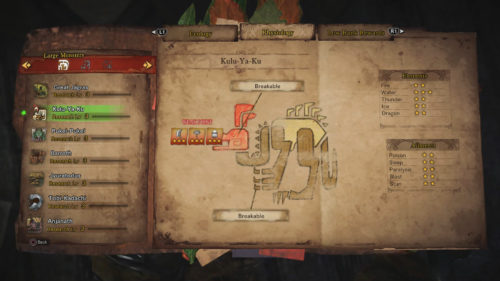 Take a look at the monster’s weak spots in this Kulu-Ya-Ku Physiology report. 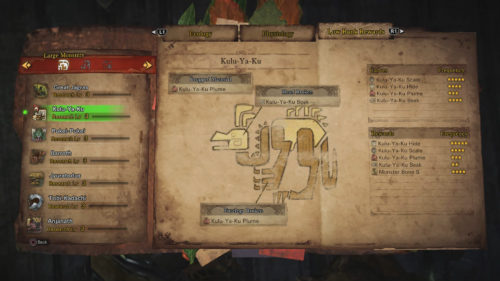 This is the Kulu-Ya-Ku Low Rank Rewards report. See what materials this creature has a chance of dropping/yielding.

Hunting Quest Text: “The Kulu-Ya-Ku uses its dexterous forearms to carry objects. Left unchecked it’s liable to run off with crucial supplies. Step one of rebuilding a secure cap is hunting that thief!”

Characteristics: An odd bird wyvern that has developed limbs capable of carrying weapons. It’s been spotted stealing eggs from nests found in the Ancient Forest and Wildspire Waste.

Useful Information: Kulu-Ya-Ku can use small boulders to shield itself or smash against its enemies. For it to drop whatever it’s holding by using your slinger. You can also fright it by luring one of its natural enemies.

Rock: During the fight against Kulu-Ya-Ku, the monster will start digging into the ground to grab a rock. It will wield the rock like a weapon, using it to shield itself or to attack. To knock the rock out of its hands, use your Slinger.

Kulu-Ya-Ku has a pretty basic attack kit. The only thing you really have to worry about is when it picks up a rock, as it becomes harder to hit it straight on (when facing its head).

Like the Great Jagras, Kulu-Ya-Ku is a low level monster designed to get you comfortable with Monster Hunter: World’s combat mechanics. The fight itself is not overly strenuous, but can quickly turn against you if you are not taking it seriously. To help you fight, here are a few tips: 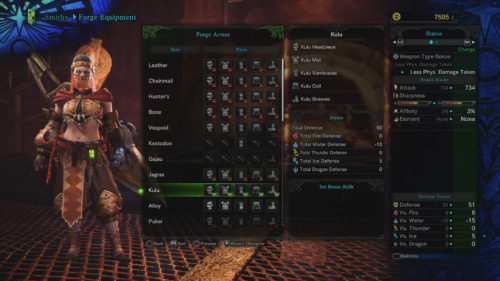 The Kulu Set on a female hunter. 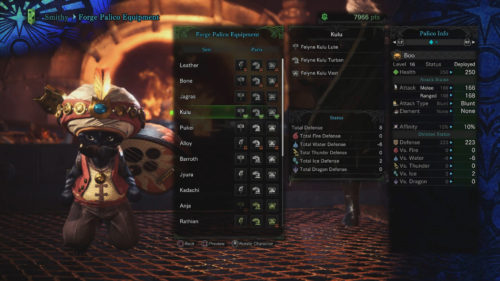 My Palico wearing the Kulu Set.

The Kulu α Set on a female hunter.

The Kulu β Set on a female hunter.

The Kulu α Set on my Palico.

Thoughts on our Kulu-Ya-Ku guide? Let us know in The Pit below.