Hellblade Senua’s Sacrifice is finally out, and that means fans everywhere are getting their hands on copies of the game. Having played previous work by Ninja Theory (Enslaved: Odyssey to the West), I was intrigued by the studio’s new outing.  In a rare occurrence, I actually had accidental media blackout on this game, so I went in pretty much without hype. Did Team Ninja deliver? Here is my Hellblade Senua’s Sacrifice review.

What is Hellblade Senua’s Sacrifice?

Hellblade Senua’s Sacrifice is the newest game out of Team Ninja Theory. The game tells the story of Senua, a psychologically troubled woman who ’embarks’ on a journey to Helheim (Norse Underworld) in order to save her love, Dillion. Along the way, Senua faces off against her own psychotic manifestations, leaving players to wonder what is real and what is fake.

Story aside, gameplay in Hellblade Senua’s Sacrifice is a mix of combat, walking, and puzzle solving. Through these three main mechanics, player’s guide Senua towards completing her quest. 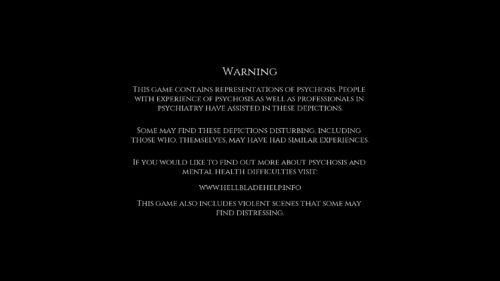 Probably the most interesting and intriguing aspect of Hellblade Senua’s Sacrifice, is the game’s commitment to telling the story of a mentally ill individual. Senua as the game points out, suffers from Psychosis. Senua’s psychosis has been with her since childhood and impacts her life. As you guide Senua through her journey, you hear voices; randomly move between worlds; and begin to wonder what is real and what isn’t.

Handling such subject matter could have proven to be problematic, but Ninja Theory hired a slew of mental health experts and really delivered a unique and tasteful look into dealing with mental issues. At a time when game companies are trying to be as homogenous as possible, it amazes me that Ninja Theory took such a leap. Regardless of my thoughts about ‘the game’, I want to commend the studio for taking a risk. Games like this move the entire industry forward and should be commended. 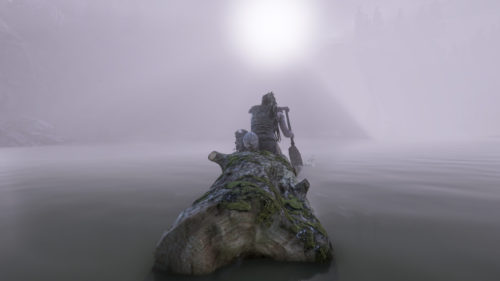 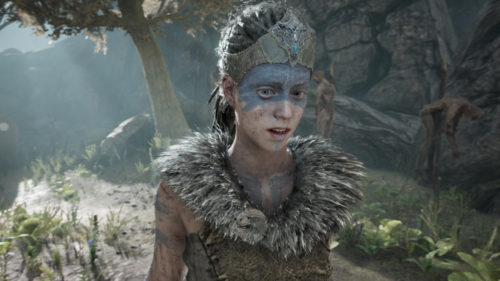 If you played Enslaved, you will know Ninja Theory likes motion capture (my boy Andy shows up at the end). Hellblade is no different. Senua’s movements are based on motion capture and they look amazing. Melina Juergens, the actress playing the lead role, did an incredible job. From simple things like running, to more complex actions like sword fighting, every action looks real. Is comparing the motion capture in Hellblade to be the gaming industries equivalence of the new Planet of the Apes series to out there?

Like graphics, the sound design in Hellblade Senua’s Sacrifice is expertly done. Voices sound crisp and clear; the OST shifts effortlessly between tones like sullen and action; the environments and creatures sound hellish (a certain scream during Surtr’s mission is especially chilling); and the OST is just plain awesome. Overall, the sound in Hellblade Senua’s Sacrifice is incredible.

Controls in Hellblade work fairly well. I played the entire playthrough on gamepad and never had an issue with how buttons are laid out. Layout aside, controls are quick and responsive and work reasonably well. I noticed a bit of input lag during combos, but I’m assuming this is more to do with animations then controls themselves.

If I could give a perfect score to a game without including gameplay, this would be it. Unfortunately, gameplay is a major component of video games (one I enjoy) and I found the gameplay in Hellblade to be just okay. Hellblade is divided into three major gameplay segments: combat, exploration/walking, and puzzle solving. I’ll briefly touch on each segment below. 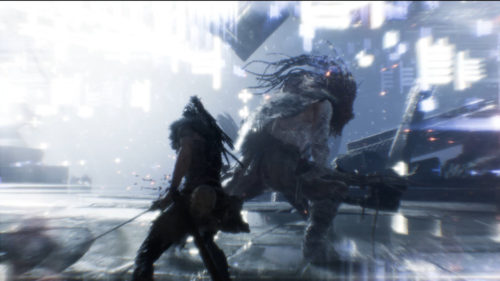 Combat in Hellblade is akin to something like a stripped down For Honor. When enemies appear, you lock into a sort of duel like scenario with them. At your offensive disposal during these fights is the typical light and heavy attack fare, as well as a melee (kick/shoulder charge) attack. While you can string together some combos, the majority of the time you will more then likely be simply button mashing. From a defensive perspective, you can dodge as well as block, but I never felt the need to block as dodging pretty much always avoids damage.

Enemies you face during combat vary from shield to club wielders, but never really feel all that threatening. Yes, as you progress they become more mobile and have more health, but they are really easy to deal with. The only real time your life is threatened is when Hellblade throws a million enemies at you and lets you deal with the lack of crowd control options. This approach is unfortunate as I found around the halfway mark of my playthrough to be bored with the combat.

There are a few bosses in the game and they are mostly well designed. There is a certain boss inside a mountain who has a somewhat obnoxious design, but overall I was happy with the variety. I do wish bosses had more moves, but that goes back to my entire criticism of Hellblade’s combat which is just how shallow it is. 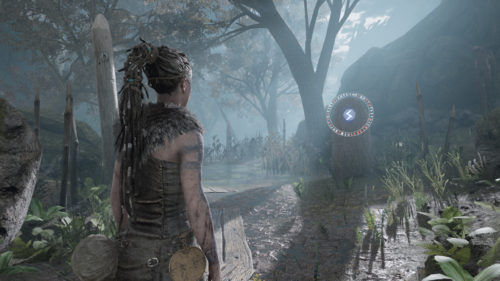 About a third of your time with Hellblade will be spent walking. This isn’t a bad thing per se, it’s just that most of the environments are completely empty. While being pretty to look at, the fact that the only hidden things in Hellblade are the Lorestones, just makes me sort of sad. Ninja Theory built a beautiful and mysterious world, but there is little in it to actually discover. 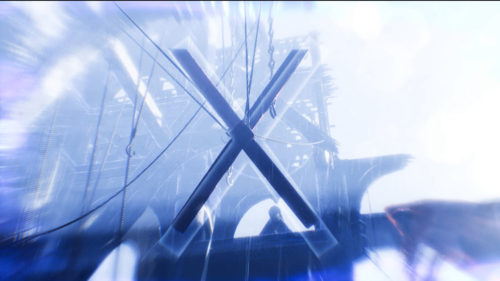 I wouldn’t dislike the puzzles in Hellblade so much if it wasn’t for two things: difficulty and variance. The puzzles in Hellblade revolve around finding shapes in the environment. These shapes range from the simple to more obscure. You’ll most likely spend a couple hours running around looking for squares in trees or Ps in corpses. This approach is fine, but having this be the only puzzle in the game is a serious issue. Give me some variety! Please!

The biggest selling feature of Hellblade is the game’s story. While I think the game does a decent job of telling a story, I wasn’t blown away by it. Maybe I’m cynical or just old, but I found it to be like many other video games I’ve played. It just didn’t resonate with me. Things like the voices started strong but grew tiresome, leaving me with a feeling of strange ‘backseat’ gaming – itice. At times I wanted to yell out, ” I KNOW THERE’S ENEMIES BEHIND ME! ”

The other problem I have with the story that left me a bit confused, was the distinct lack of accessibility. In a game like Dark Souls, all the pieces are there if you want them. In this I was left mostly confused and without resources like weapon descriptions, or characters to lore leap off of. Instead I’m waiting for the community to develop the story and clarify what was real and what wasn’t.

+ Game ran well for me

It’s odd, reading over my review makes me think I would have liked this as a movie instead of a video game. The whole time I was playing I kept thinking of films, Valhalla Rising and A Field in England. As this is not a movie, I can say my experience with Hellblade was mixed. On the one hand, things like graphics and sound blew me away. On the other hand, things like the game’s gameplay and story left me underwhelmed. Combining these likes and dislikes, leaves me with a generally mixed feeling about the game. Do I think you should pick it up? Yes. Do I think it’s the greatest game ever made? No. Temper your expectations and head into Hellblade with an open mind; maybe the story will resonate with you in ways it didn’t with me.

+ Graphics – Game is Beautiful to look at

+ Controls are tight and responsive

+ Stable: game was stable for me

– Three pillars of gameplay make this a master of none

What is your Hellblade Senua’s Sacrifice review? Let me know in The Pit below.