What is Embers of Mirrim? 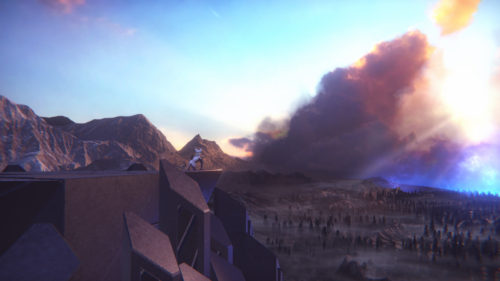 Look at all this beautiful world, yet there is no story

Embers of Mirrim is an indie platformer akin to games like Ori and the Blind Forest, and Rayman. In Embers of Mirrim, players play as a Spyro looking creature (Mirrim) who is a combination of two Spyro like creatures from two warring tribes. Both Spyro creatures are drawn to a mysterious spire after a light is shot out of it. Once both arrive, they begin to fight and merge into one. The new creature decides it is going to unite the tribes and rid the land of the corruption that is taking over (I think). Along the journey, the Mirrim learns it is able to split into both creatures, which makes up the bulk of Ember of Mirrim’s gameplay. 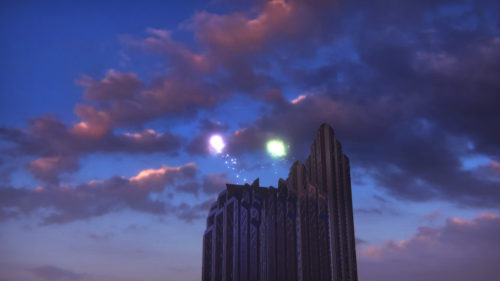 Before I get to Embers of Mirrim’s gameplay, I need to briefly touch on the game’s story. Sadly Embers of Mirrim is pretty bare in this department. The tiny bit of story I gleamed was that there was some type of corrupting force that was taking over the world and Mirrim wants to stop it. That’s about it. The delivery of the story is almost non-existent as the characters in Embers of Mirrim don’t emote or speak. There’s no NPCs out in the world and no items or books that provide more lore. The little story you get, is delivered through cutscenes. These cutscenes don’t really present much story.

Having completed the game, I can honestly tell you that I have no real idea what any of the characters were named (besides Mirrim), what the world is called, or why any of what you accomplished even mattered. This is really unfortunate as the Embers of Mirrim seems like it could tell an interesting story. Couple the lack of story with how short Embers of Mirrim is (I beat it in 3 hours) and it is easy to be disappointed. 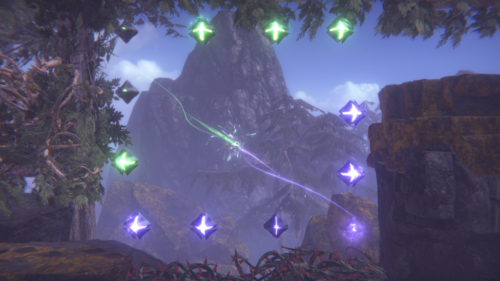 Gameplay in Embers of Mirrim is focused around the concept of splitting, and then controlling two ‘Embers’. These Embers can pass through areas normal Spyro like creatures can’t. Other abilities granted in Ember form include manipulating mushrooms to do things, drawing shapes (a sort of collectible), and making flies explode. It is by employing these assorted abilities that you will make your way through the land of Embers of Mirrim (I’m not forgetting the name, I literally have no idea what it’s called).

Splitting is pretty simple from a concept standpoint. You hold both the left and right triggers (game can only be played with gamepad) to initiate splitting and continue holding as you guide both Embers around by the left and right thumbsticks. For the most part this gameplay element works and works pretty well. Controls are tight and relatively responsive. I easily found the splitting mechanic to be the best part of Embers of Mirrim, but there is one major drawback.

While Embers of MIrrim presents the concept of splitting pretty well at the beginning of the game, things fall apart about the last third. After a certain point in Embers of Mirrim, the amount of things you need to keep track of when split increases to a near absurd amount. You’ll split, be guiding both Embers via both thumbsticks, then have to watch as a swarm of angry flies tries to kill you from the left side of the screen and a spider tries to kill you from the right side. This all is happening while you try to dodge other hazards. These segments just feel like overload and can be hard to wrap your head around. 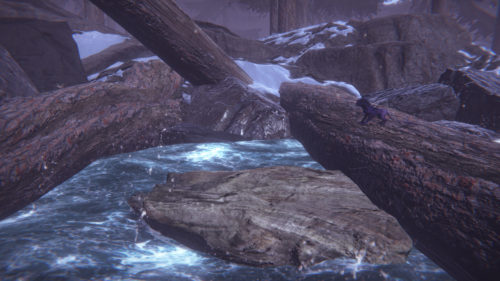 Outside of splitting the general platforming mechanics could use some work. There is the dreaded short jump, which basically sees your character jump for a ledge only to hit it and fall into the abyss below. This happens quite often and becomes rather annoying. There is also a bit of floatiness to standard jumps which makes each jump feel different. This makes platforming way harder than it should be as it feels like player input needs to be different every jump.

There are other mechanics to use when you are simply platforming and these include sprinting and pouncing. Both mechanics are seriously underutilized and not really used in any intuitive ways. Sprinting is used in chase sequences, while pouncing is like any other ground pound. I would’ve liked to see some new ideas here. 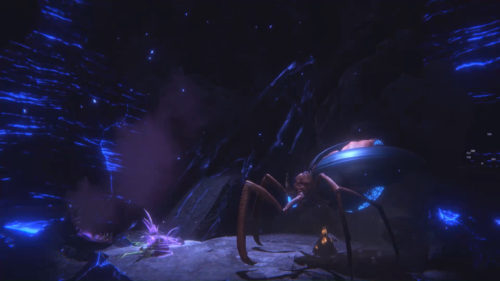 Embers of Mirrim features minor combat, but overall it makes up a tiny fraction of the game. You will face a few bosses throughout your playthrough and these bosses revolve around getting weakened, until you can Pounce on them. None of the bosses are all that interesting, and I would say the last boss is the least interesting of all. Not much more to say here, but that combat is pretty standard. 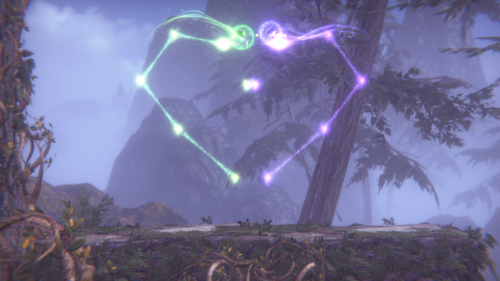 Like most platformers, Embers of Mirrim features a few different environments to explore. These environments range from forests, to tunnels, to inside the Spire. None of the environments really stood out to me in any really meaningful way. They look good, but there is very little substance to them. While the game advertises exploration, there really isn’t much of a reason for the player to explore. I felt little interest in doing the connect the dot Glyphs, or saving the other Spyros. Again this is pretty disappointing, especially coming off of gems like Hollow Knight and Owlboy.

Graphics – Embers of Mirrim looks good and has a nice art style.

Sound – The soundtrack is good, but the sound effects & ambience are pretty much not a thing.

A lot of Easy Achievements – If you like achievements, there are a lot here.

Camera – Can be wonky at times. Zooms out to accommodate large creatures, views, etc, but makes it hard to see character at times.

The only way I can really describe my experience with Embers of Mirrim is underwhelming. While I had no hype for the game to begin with, it just feels lacklustre in so many areas. Omitting a story, making the game so short, not really innovating, poor design in the last third of the game, finicky controls at times, and bland and boring environments all led me to having a less than enjoyable experience with the game. The few things I did enjoy: graphics, stability, Splitting, easy achievements, controls and music, just weren’t enough to save Embers of Mirrim from being underwhelming. I recommend Embers of Mirrim if you’ve already played all the amazing platformers that are out there and just want something now.

– Boring environments with little reason to explore them

– Poor control when not split

– Last 3rd of the game is pretty poorly designed