The Barroth is an intermediate level monster you will hunt in Monster Hunter World. This monster is located in the Wilspire Waste and is tracked by footprints, broken anthills, and mud tracks. To learn more about the Barroth and how to kill it, check out the Barroth guide below. 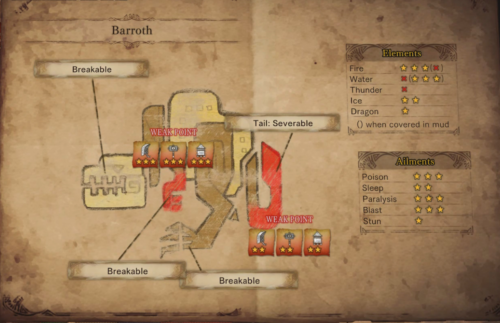 Check out the Barroth Physiology report to see where you should be targeting. 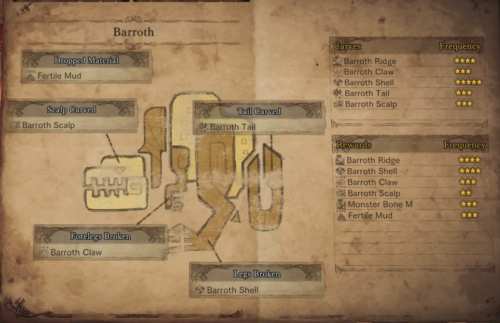 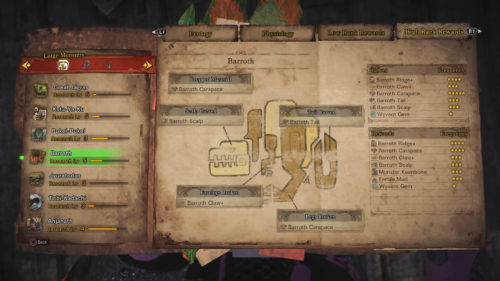 These are the Barroth High Rank Rewards.

Hunting Quest Text: “Something surely left by Zorag Magdaros was discovered out in the Wildspire Waste. Fifth Fleet hunters: Keep our scholars safe as you escort them out to investigate this new evidence.”

Characteristics: Barroth seeks out ants, their favorite snack, and mark their territory with mud. They attack potential rivals with their devastating charging attack.

Useful Information: While it uses hardened mud as armor, Barroth can also fling it off its body as an attack. Use water element weapons or you slinger to gradually knock off its mud.

Mud : Barroth will coat himself in mud during your fights with it. In this state, Barroth gains a coverage of mud that serves as armor. When Barroth covers itself in mud, Thunder element damage loses its effectiveness, and Water element damage gains effectiveness. To knock the mud off, use Water damage or your Slinger (mud will gradually come off during fight regardless).

Another aspect of the mud mechanic is how it affects the hunter. Barroth has a couple of ways of delivering mud throughout battle areas. The first is a shake (it shakes the mud off its body which lands around it), and the second is a

Waterblight: Barroth can inflict the Waterblight status effect on Hunters. This status effect causes the hunter’s stamina to regain more slowly. While under the effect, a water droplet appears above the players health bar (two appear for Severe), and the stamina bar turns blue. Use a Nulberry to cure the effect.

Barroth fights pretty much the same regardless of being muddy or not, so here are the attacks it can use.

This fight will more than likely be a long one for you. Barroth can be a tough monster to hunt as it has a lot of defense and health. With this in mind, head into the fight with plenty of supplies. 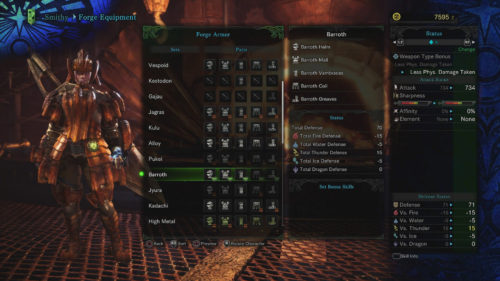 The Barroth Set on a female hunter. 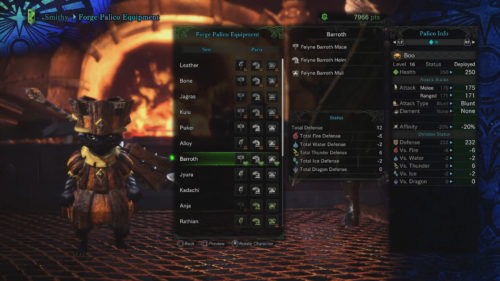 The Barroth Set on a Palico.

Human: All Materials are Barroth Carves/Drops unless noted.

Palico: All Materials are Barroth Carves/Drops unless noted.

The Barroth α Set on a female hunter.

The Barroth β Set on a female hunter.

Human: All Materials are Barroth Carves/Drops unless noted.

The Barroth α Set on my Palico.

Palico: All Materials are Barroth Carves/Drops unless noted.

Thoughts on our Barroth guide? Let us know in The Pit below.