After your spend some time in Coral Highlands, you will be given the option to head to another new area called Rotten Vale. This area is teeming with powerful monsters, including Radobaan. Radobaan is covered in sharp bones that act as both defense and offensive abilities. You can track the creature around the map by looking for Strange Ruts and Tarred Bones. To take down this great beast, use our Radobaan guide below. 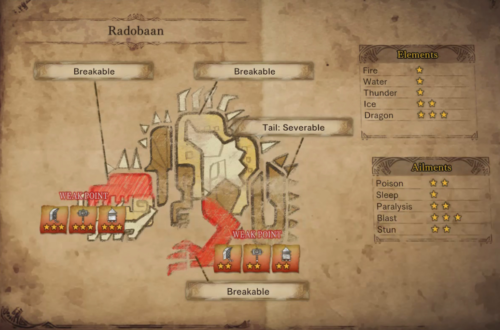 Check out the Radobaan Physiology report to see weak points and elemental weaknesses. 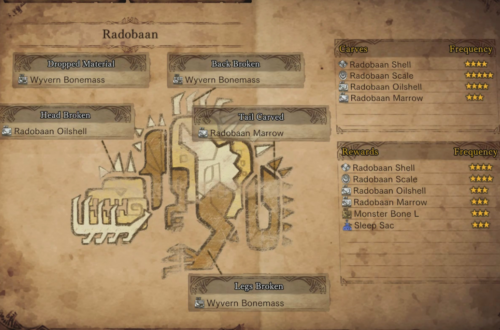 Check out the Radobaan Low Rank Rewards sheet to see what materials this creature drops. 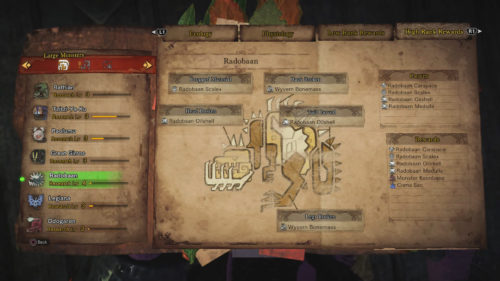 Check out the High Rank Rewards for Radobaan.

Hunting Quest Text: “The bones covering Radobaan’s body are gonna be tough to get through, but if we want to continue our survey of the Rotten Vale, you’ll need to find a way!”

Characteristics: A gigantic brute wyvern that eats the bones of carcasses found in the Rotten Vale, using some of it as armor. It also rolls into a ball as a form of attack and transportation.

Useful Information: Attack it as it rolls around to throw it off balance and knock it down. Chunks of bone can be mined from its body once it’s down. Shattering its bone armor is the key to winning a fight against this beast.

Bone Armor: When you first see Radobaan, you will immediately notice all the bones stuck to its outer shell. These bones serve as both armor and offense. With the bones on the exterior, you either need to knock Radobaan over (to attack its unprotected underside), or break the exterior bones. If the fight goes on long enough, Radobaan returns to its den and reapplies the armor by diving into the bone pit found there.

Sleep: Radobaan has the ability to cause sleep to players by releasing a sleep gas. This status effect causes nullifies hunter action and causes them to take more damage. To wake up, players either need to be hit by a friendly, hit by a monster, or have enough time pass. Sleep effective is denoted by a ZZZ above the health bar.

Radobaan has a number of attacks and tools to use versus the hunters. It also has the ability to cause a couple of status effects which makes the fight even more difficult. Let’s look at this monsters kit:

Radobaan’s bone armor makes this fight somewhat annoying. With that being said, there are a number of tips I can give you in hopes of making this fight a little better. 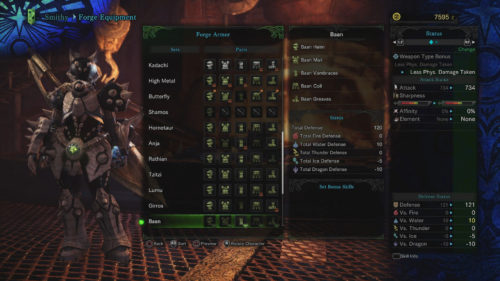 The Baan Set on a female hunter. 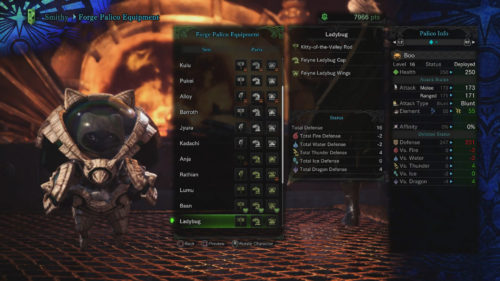 The Baan Set on my Palico.

The Baan β Set on a female hunter.

This concludes our Radobaan guide. Wish to add something? Drop a comment in The Pit below.