Once you’ve progressed through the Zorah Magdaros storyline of Monster Hunter: World, you will gain access to High Rank. This is basically the end game of Monster Hunter: World, and it is in this mode where you will find the most difficult monsters. One of the monsters you will fight in High Rank is called the Pink Rathian. This subspecies of Rathian is pink in color and really, really wants to kill you. Like all monsters before it, we must kill the Pink Rathian. To do this, use this Pink Rathian guide. 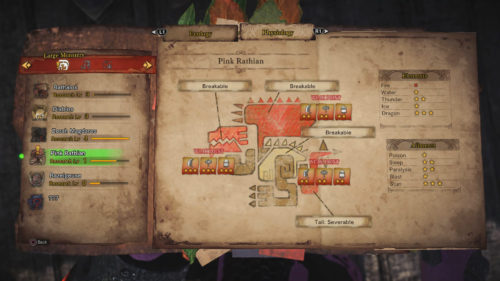 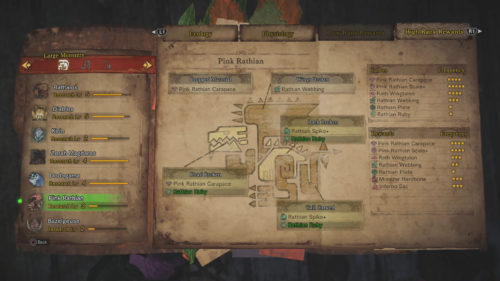 Hunting Quest Text: We’ve finally tracked down the source of those mysterious tracks. Report to the Coral Highlands and seek it out! I’ll be expecting your report as soon as you’re done!

Characteristics: A subspecies with vibrant pink scales. Pink Rathians wield their toxic tails more deftly than normal Rathians, weakening prey with poison before moving in for the kill.

Useful Information: Pink Rathians develop hard shells on different body parts compared to standard Rathians, particularly on their rails. If you’re looking to sever its tail, aim for the relatively soft time of the tail.

Fireblight:  When being afflicted with Fireblight, a small flame will appear over the hunter’s health bar (two for Severe), and the red health bar will turn red and begin to decrease. To cure this affliction, simply roll into water once, roll on the ground three times, or consume a Nulberry. When the Pink Rathian’s mouth has flames in it, you know fire attacks are coming.

Fighting Pink Rathian can be a major pain, and is easily the hardest monster you’ve faced up to this point. The Pink Rathian, like its Rathian cousin, has a collection of moves it which can quickly kill you. Let’s take a look at the Pink Rathian’s attacks.

Pink Rathian can be a tough fight. The monster is fast, mobile, and packs a serious punch. Here are a few tips to help make the fight a bit easier.

The Rath Heart α Set on a female hunter.

The Rath Heart β Set on a female.

Human: All Materials are Pink Rathian Carves/Drops unless noted.

This concludes our Pink Rathian guide. Wish to add something? Drop a comment in The Pit below.