Alongside having to defeat Rathalos to progress the story, you will also be tasked with defeating Diablos. Diablos, like Rathalos, is a flying wyvern who’s the apex monster of their respective area, Wildspire Waste. To face off against Zorah Magdaros, you will need to trackdown and defeat Diablos. To help you defeat Diablos, use our Diablos guide. 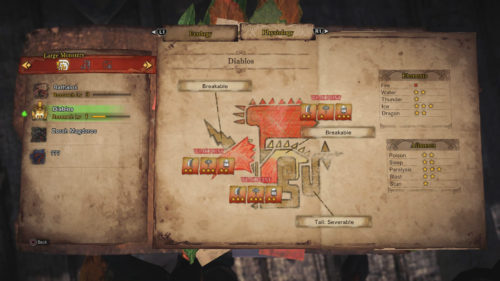 This is the Diablos Physiology report. Check it out to see where to focus your attacks. 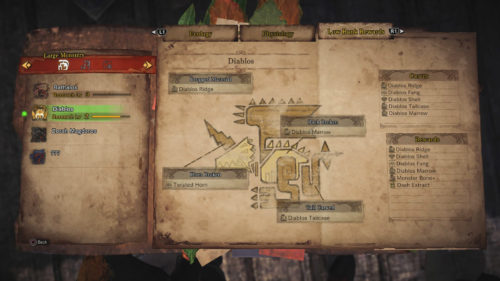 Check out Diablos Low Rank Rewards. These are materials you have a chance at getting for beating it. 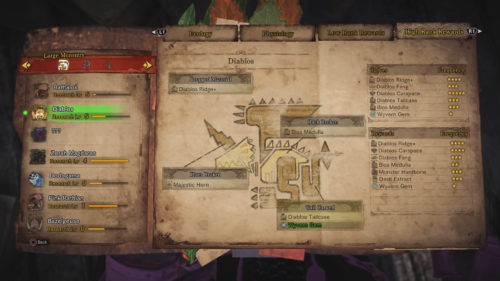 Hunting Quest Text: “The First Wyverian’s not gonna spill the beans about Zorah until we stand on top of the food chain. That means we gotta hunt us a Diablos!… Does that mean we have to eat it too?”

Characteristics: The apex monster of the Wildspire Waste. A menacing, territorial beast that lurks underground. Loud noises will cause it to lunge out of the sand in search of prey.

Useful Information: Diablos can be forcibly brought to the surface by using loud sounds. And its charging attack, while devastatingly powerful, can be baited into colliding with a windspire momentarily getting the Diablos stuck.

Stun: Diablos can attack and stun the hunter. This seems to occur most often when it charges. You need to either wait to be hit (by an ally or enemy).

Diablos is mobile and can deal serious damage to hunters. It will be your first real test up to this point against a monster that can really punish you if you make a mistake. Here are the attacks it will use:

This is easily one of the hardest monster you will face in MHW (like Nergigante level frustrating). The Diablos is fast and incredibly hard hitting (it can one shot you with one of its attacks). Without proper preparation it is pretty easy to lose and lose often, so hopefully I can help alleviate some of the problems. 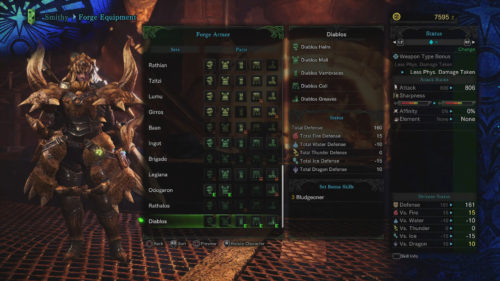 The Diablos Set on a female hunter. 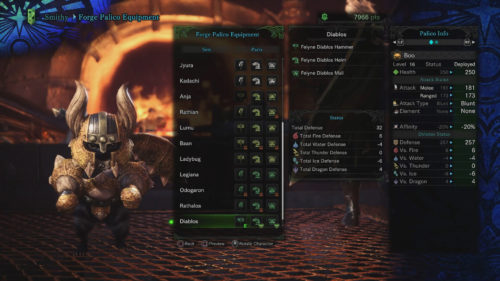 The Diablos Set on my Palico.

Human: All Materials are Diablos Carves/Drops unless noted.

Palico: All Materials are Diablos Carves/Drops unless noted.

The Diablos α Set on a female hunter.

The Diablos β Set on a female hunter.

Human: All Materials are Diablos Carves/Drops unless noted.

The Diablos Set α on my Palico.

Palico: All Materials are Diablos Carves/Drops unless noted.

This concludes our Diablos guide. Wish to add something? Drop a comment in The Pit below.