My initial exposure to Battlefield 1 was through the game’s less than stellar campaign mode. With a bad taste in mouth, I decided to take the series’ cornerstone, multiplayer, for a spin. Battlefield and huge, immersive, squad based multiplayer fun have become somewhat synonymous in the gaming industry nowadays.  But how does the new, World War 1 focused Battlefield stack up? Below is my Battlefield 1 Multiplayer Review.

I mentioned in my Campaign review that I had some gripes with EA’s Origin platform. Before I dive into Battlefield 1’s multiplayer I thought I would share a few. First things first, I had not been on EA Origin since Dragon Age Inquisition. When I did log in, I was greeted with a bunch of updates. The new update changes Origin, but not really for good. The layout takes a bit to get acquainted with and comes off counter intuitive at times. Simple things like accessing my Game Library took a bit of digging. Aesthetically it looks fine, but could use some work in user friendliness. The real issues I had with Origin reared their head when I was playing Battlefield 1.

Origin and Battlefield 1 have a strange working relationship. Certain times the two systems would work beautifully; other times the applications appear to hate one another. One example. I preloaded and played Battlefield 1 without any issues on launch day. The game and Origin worked in lockstep. However, the next day,  Origin began minimizing my Battlefield 1 window randomly. This began to occur after turning off the obnoxious in game Origin overlay (which would minimize the window to show my achievement gained).  It was not until I turned the overlay back on that this problem ceased occurring. There is also a weird issue with cloud syncing where it hangs on launch and has to be relaunched. Basically the platform is less than stellar.

After dragging Origin through the mud a bit, let’s get to the real reason we are all here, Battlefield 1 Multiplayer. Right off the bat let me say, Dice has actually launched a game that wasn’t broken on day one. This alone is a huge step up from the broken mess that was Battlefield 4. Servers were available, the connection was good and the game played smooth and stable. While it is sad that this stood out to me it should be noted that my experience with multiplayer was not impeded by poor product quality. What about gameplay? 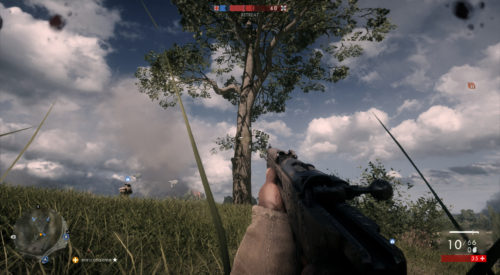 Even in battle there is beauty

Battlefield 1 is pretty standard Battlefield fare. Players take on the role of soldiers fighting on a digital battlefield. Each soldier serves a purpose. By this I mean that the game features a loadout system with each class being useful for certain things. In total there are five classes to choose from: Assault, Support, Medic and Scout. Assault is typical infantry, but posses armament to deal with enemy tanks. Support is a light machine gunner class and features the ability to restock ammo for the squad. The Medic can heal and also revive fallen soldiers. Scout is the sniper class and sits as far from battle as humanly possible while annoyingly sniping players actually playing the game.

Alongside these classes are the inclusion of hero classes, which spawn on the map for pickup. These range from things like flamethrower units to heavy machine gunners. This is the most blatant Battlefront carry over, and feels a bit out of place within the Battlefield 1 multiplayer. Having super overpowered units running around the battlefield pulled me out of the experience. There are also the Tank, Cavalry (horseback) and Pilot classes as well, but these I  rarely used.

Overall most classes feel useful. When a Squad properly fills each role and helps each other, the game really shines. Unfortunately as a solo player, I will say that I have noticed a large amount of players playing Scouts. This often means being on squads with them is next to useless as they offer very little Squad utility.

The progression system in Battlefield 1 is simple, play the game and either level up or earn Battlepacks. Leveling up is standard fare. Each new level within a class unlocks new weapons and items for that class. So if I am a Scout, when I level up, I unlock a new sniper to purchase. In order to purchase these items, your overall player level needs to increase. With each new level, you receive Warbonds which can be used to unlock new weapons and items. The system works pretty well, however for some inexplicable reason Dice has front loaded the class unlocks. Between levels 1 – 4, players will constantly unlock new class items, but then have to grind all the way to level 10 to get the last gun. This is a strangely unfulfilling approach and left me content with staying at level 4. 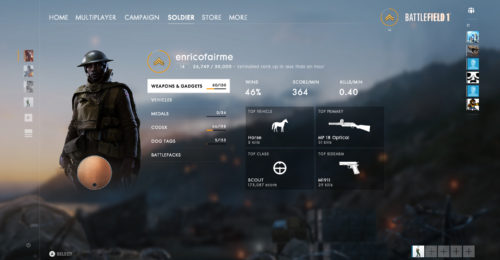 The unlocks themselves are also kind of strange. Dice has decided to do away with attachments, instead making multiple variants of a gun unlockable. So while you may unlock new weapons, they are often just the same weapon with a different attachment on it. With a game like Battlefield, unlocks should feel rewarding and worth it. I never got that feeling while playing Battlefield 1. The inherent drive to get that next weapon, just did not trigger in me. Battlepacks attempt to bridge this problem.

The easiest way to describe Battlepacks is as the equivalent of the CSGO-ification of Battlefield. These packs can drop after every match and contain new weapon skins, or puzzle pieces for legendary melee weapons. I honestly don’t know how I feel about this system. None of the skins I got looked all that good and the only person who will see them is you (aside from on the playercard on death). There is also the problem of getting skins for weapons you don’t have. While you can sell them and re-roll, why not make it so I can trade skins in (like a 2 for 1 exchange)? Let me have some control over the inherent rng in the current system. 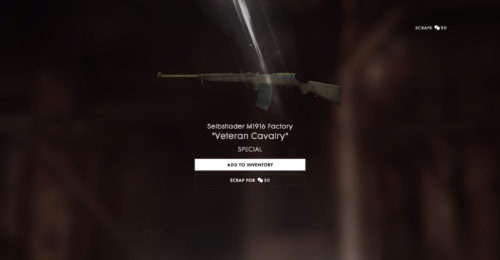 There is also a distinct lack of character customization. While this has never been a huge part of Battlefield, I would not mind some player aesthetics to unlock. The inclusion of vehicle and Behemoth skins is a nice step, but please let me make my soldier look badass.

Overall there is plenty of stuff, but there just isn’t much meat here. Progression is there, but just doesn’t capture the same draw like a Bad Company 2 did for me. This makes me wonder what types of things will come down the DLC pipe for this game.

There are a total of six games modes to play, with nine maps to play on. Fan favorite Conquest, Domination, the new ‘story driven’ Operations, Rush, Team Deathmatch and War Pigeons all provide players a choice on what type of experience they wish to have. Most of these modes are fairly well known so I won’t spend any time on them, but I will touch on new additions, Operations and War Pigeons. 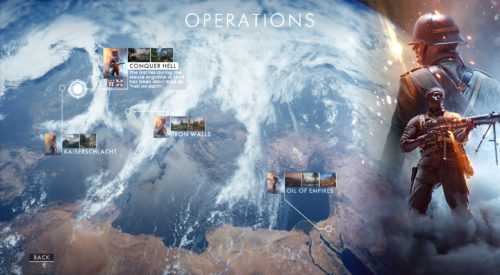 Operations is by far the mode I played the most and was the most fun I had playing Battlefield 1. This new mode from Dice plays out like a real war. Each team is shown a cutscene about the campaign they are about to undertake. Basically, the new modes pits a defending team versus a team on the offensive. The maps you play on are broken up into multiple segments and the enemy team is tasked with advancing through each segment by capturing two points (think Conquest). Once a segment is captured, the defending team retreats and begins defending the new area. The attacking team has a limited amount of respawns and loses when they use up all their battalions (battalions are basically rounds). 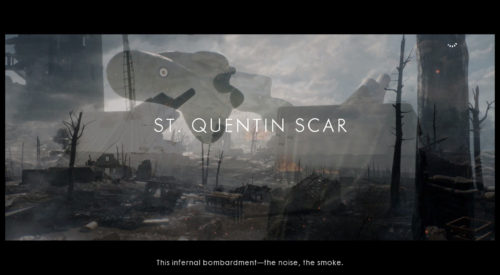 While playing Operations, I really felt immersed in the Battlefield experience. Beautiful sound design and impressive destruction highlight the battles. Seeing a blimp rolling in and having to defend, feels really good. I will say that behemoths should be balanced better. There is an absurd accuracy to the weaponry on them. I enjoyed defending and attacking from having mounted machine guns and AAs on defense, to raining hellfire down with the Behemoths as the offense there is an interesting amount of things to do on the battlefield.

War Pigeons is the other new game mode Dice has released in Battlefield 1. This mode plays more like a COD style game mode, but is still a welcome addition. Teams are tasked with grabbing a Pigeon which spawns on the map, holding it, then releasing it to call in a artillery barrage. Think of it like a mashup of VIP and Hold the Briefcase from shooters of yesteryear. The game mode is fun and frenetic and has more emphasis on small areas and gunplay. War Pigeons provides a good break from the larger scale battles and is a nice addition to the series. 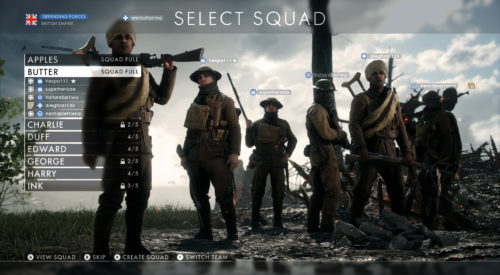 As I mentioned in my review of the Battlefield 1 Campaign, the game looks gorgeous. For PC players, there is a bevy of options to fiddle with in order to get that ideal setup. The sound design is phenomenal with accurate sounding guns, chilling sound effects and a haunting score. Controls feel good on both Keyboard and Mouse as well as Plug and Play. Destruction has  returned in fine fashion. Matches where the blimp comes down are absolutely incredible, but more subtle things like blown up walls, change how the battlefield plays out.

Period appropriate weapon is represented. One thing to keep in mind, is that Dice has largely opted for the weaponry near WWI’s end, so there are automatic weapons everywhere. Vehicles feel good, but at times can be absolutely dominant. Tanks will kill you in one shot. The horse is awesome. Riding around the battlefield with sword drawn, chopping up enemies is immensely satisfying.

Dice has breathed new life into the stagnating Battlefield multiplayer with the new direction of Battlefield 1. While undertaking my Battlefield 1 Multiplayer Review, I was often surprised by how much fun this game can be. For one, the fact the game was not completely broken at launch was a good sign. As a game, Battlefield 1 provides ample opportunities to find the area you find fun. Want to pilot old WW1 plans? You can do that. Want to be a medic, healing and reviving? You can do that. The insanity within the tangents of battle make multiplayer matches incredibly fun. My major drawback was the progression system, which left me wanting more from Dice. More reasons to level. More reasons to dump hours into the game. If you are a fan of the military shooter genre, this is pretty much a no brainer purchase.