Home » Game Reviews » World of Tanks: Late to the Game

World of Tanks: Late to the Game

EnricoFairme and I have been looking for online games to play together. I stick mostly to indie titles, and Enrico sticks mostly to grueling single player games, so I have been forced to think outside the box. I tried playing Total War: Arena and thought it sucked (see my review here) and had the Wargaming.net client installed on my computer. Tanks are cool, so I gave World of Tanks a whirl. Considering EnricoFairme plays every free weird game he can on Steam (see Microtransaction Simulator, or Confess My Love as two great examples) I think he would be all over a free to play game. Turns out he hates our friendship, if this review was a restaurant reservation it would be for one 🙁

The premise of the game is simple, blow up the bad tanks or capture the bad base. I like how straightforward the game is because it immediately lends itself to nuance. The playing field didn’t feel too imbalanced, there were plenty of noobs to roll around with. The tutorial was thorough with regards to the gameplay, and wasn’t even that bad. 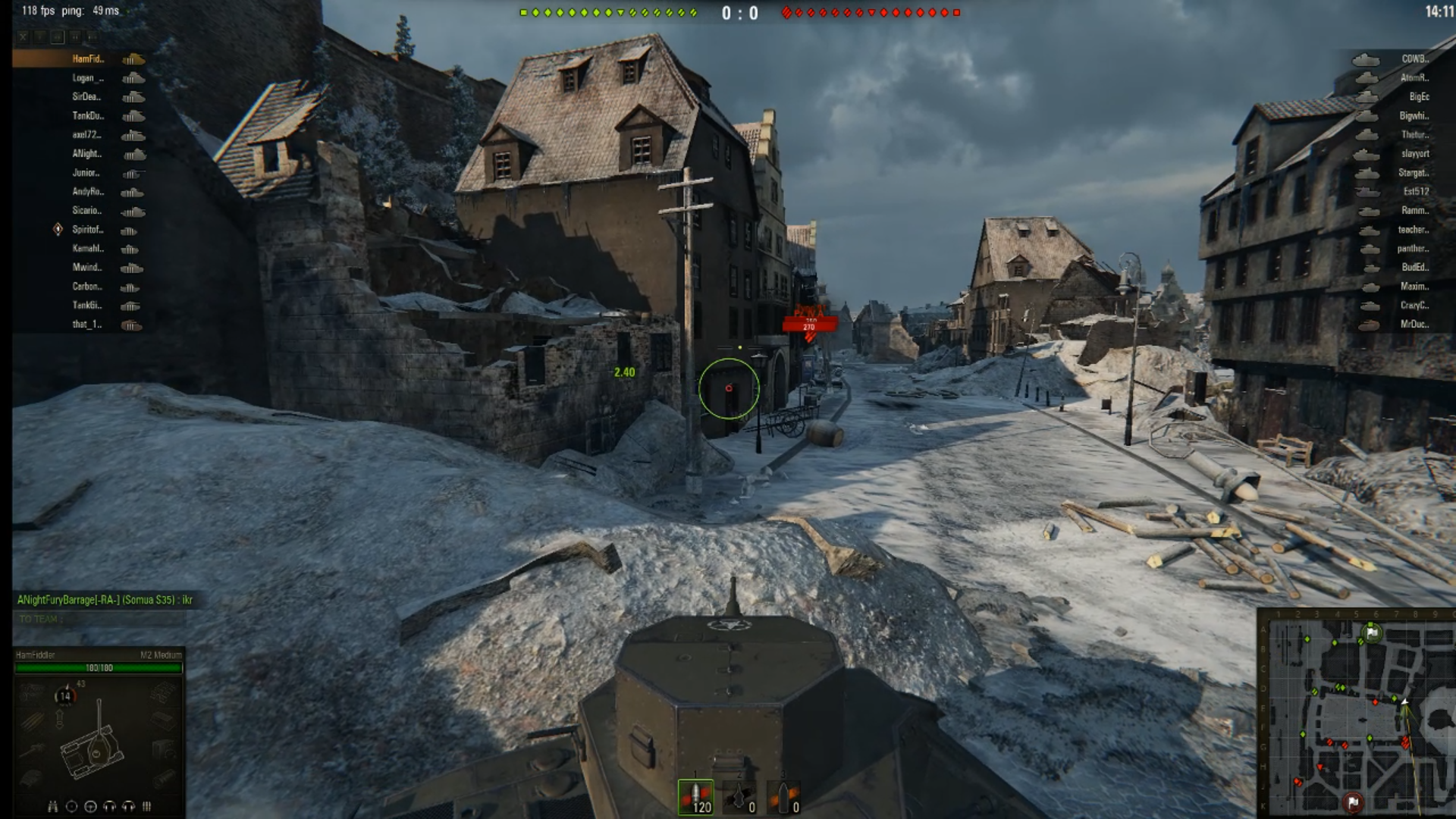 I had a horrible time my first night in trying to find a game. I am talking consistently 2-4 minutes of waiting. The long matches take 4-5 minutes, much shorter if you suck. I spent as much time in game as in the waiting to connect screen. It was torture. I decided to write my review after the first night of playing and slam the game as useless trash. I gave it a second go today and found the matchmaking was significantly improved. That made a huge difference. 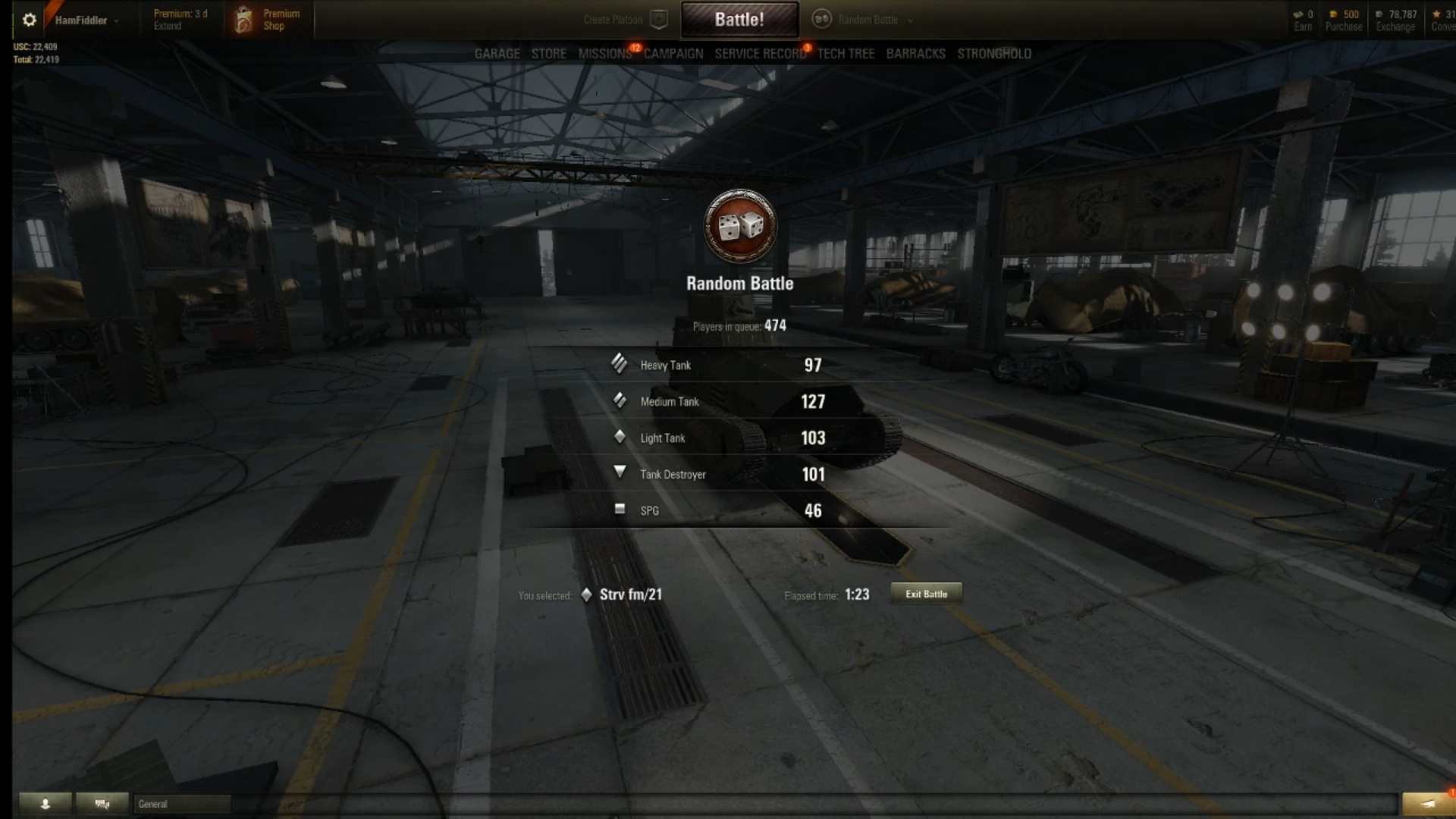 I wish I had a screenshot from my first night, literally over 4 minutes of waiting

What the heck are all these buttons in the Garage? I spent 20 minutes in the tutorial, and they made it look so simple. I get to the garage and their are indecipherable buttons everywhere! This game will throw a World of Tanks noob straight into the fray, no helpful little tips anywhere. I do know one great rule of thumb about free to play games though. Free games will always give you a chunk of free premium in game money. DO NOT SPEND THIS MONEY! Everything you can buy at first in a game typically sucks. Learn the game and your pwn play style before losing the only free money you have ever had in your life. I have a friend, SenorLeonard (king of League of Legends ARAM), and he dropped his free premium coin in the first day on Nunu. Nunu … 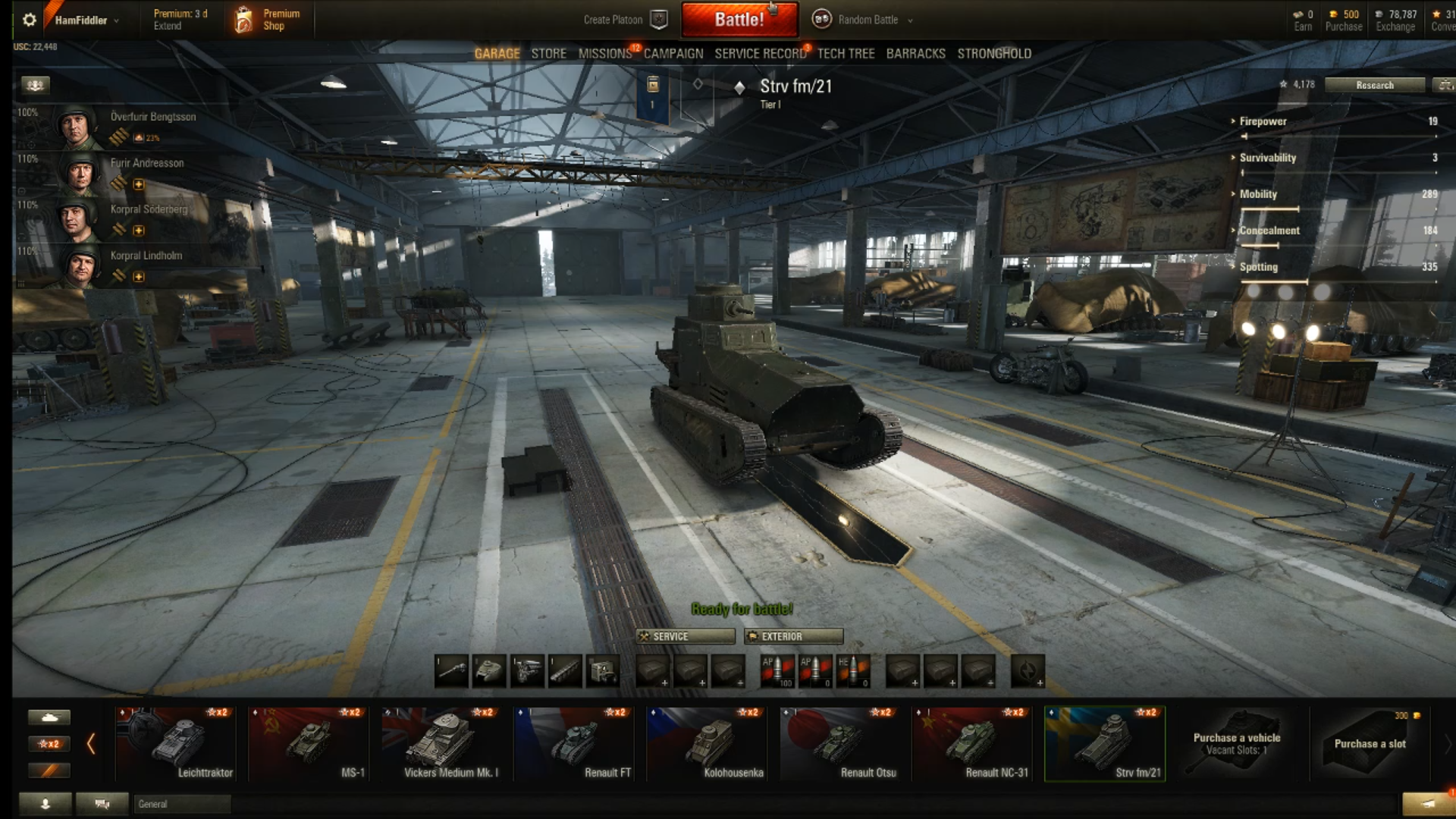 Why are there so many buttons?

After getting my panties unbunched, I realized that all the buttons in the garage will lead to deeper gameplay. That’s pretty cool. As a World of Tanks noob I was overwhelmed, but I can see why the game has long legs. You can tweak to your hearts content (not encouraging you to become a tweaker … ) and always find a more perfect tank, crew, weapons, or whatever. I can really dig that. 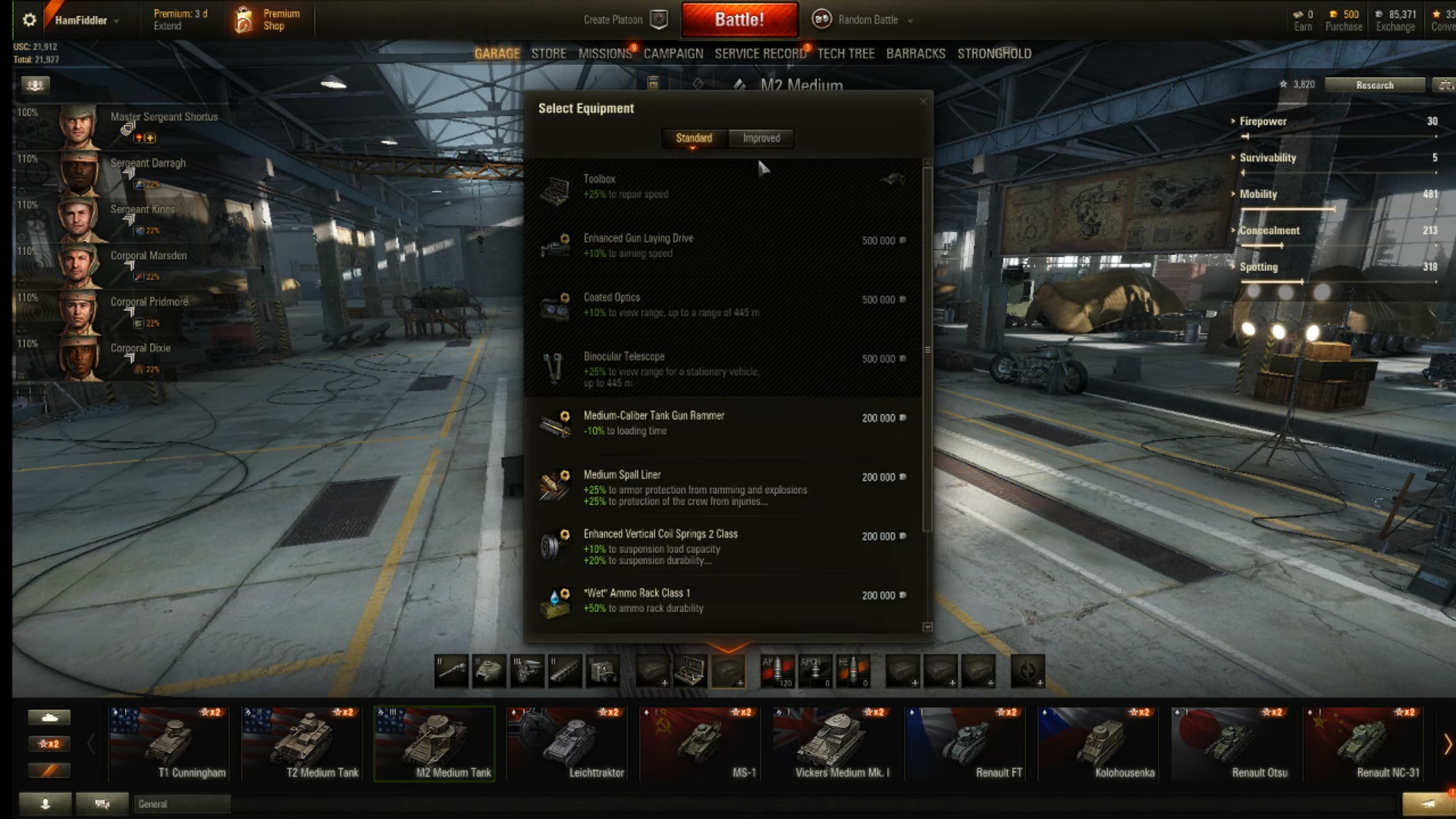 I love number crunching. This game offers oodles of numbers. I found this to be awesome. It is clear who was the top tank commander on your team. It will be clear through a lot of match history which tank you excel in. Video games are technically just big jumbles of numbers, and I appreciate the devs giving the players access to lots of data to improve their own gameplay. Keep it up guys! I always like to see how bad I am doing. 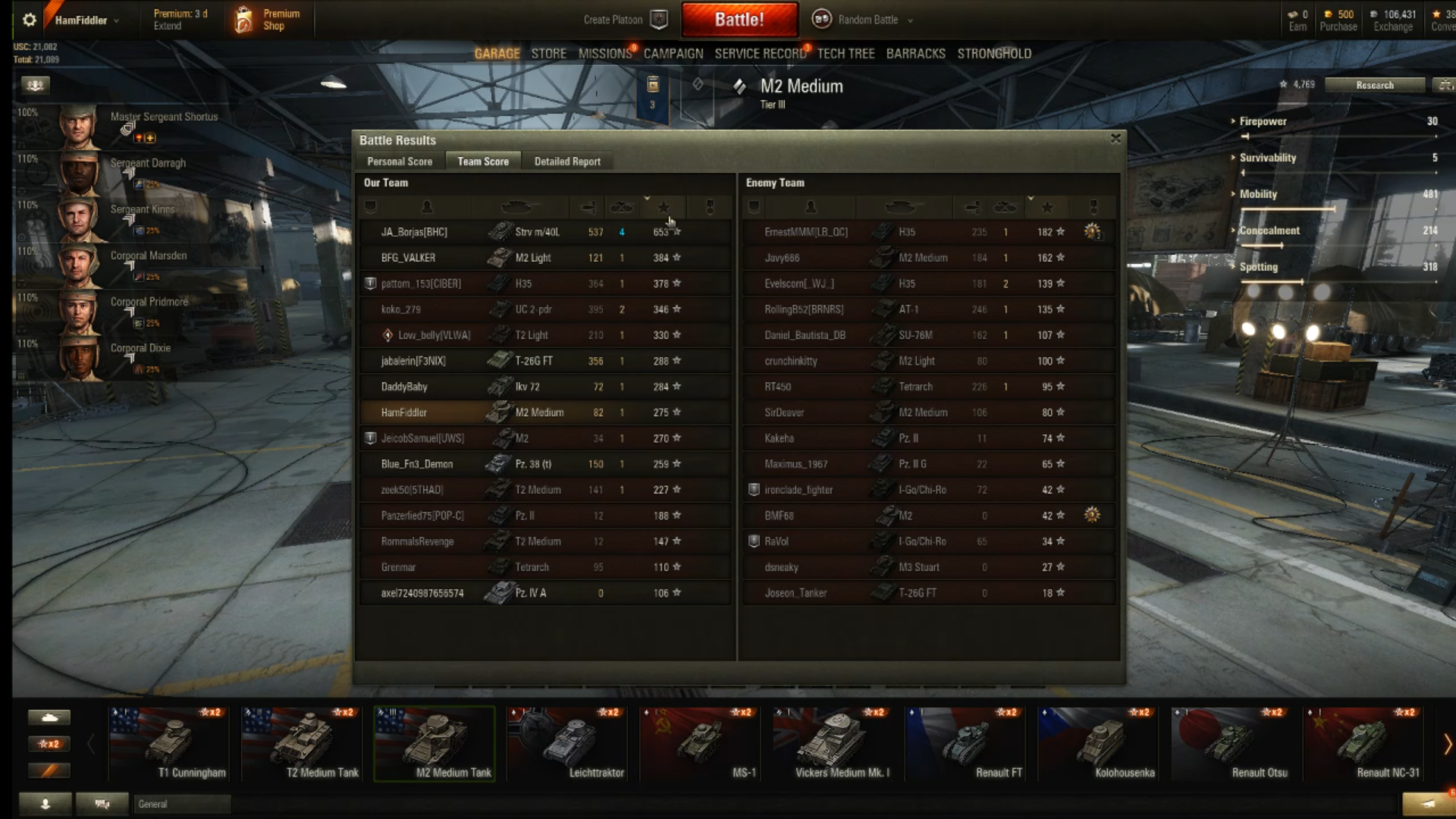 Middle of the class, better than my degree :O

As a typical World of Tanks noob I thought I could valiantly charge into battle with my iron steed, disposing of my foes as easily as the tutorial taught me. I got walloped. It was pretty sad. Before I knew who was shooting me I was already dead. I love that the game forces you to consider sight lines, to strategically position your vehicle. The aim accuracy is greatly impacted by vehicle movement, so it forces you to go slow. This can feel a little tedious at times, but isn’t that what trying to not die is all about? It does give the game a more immersive feeling. 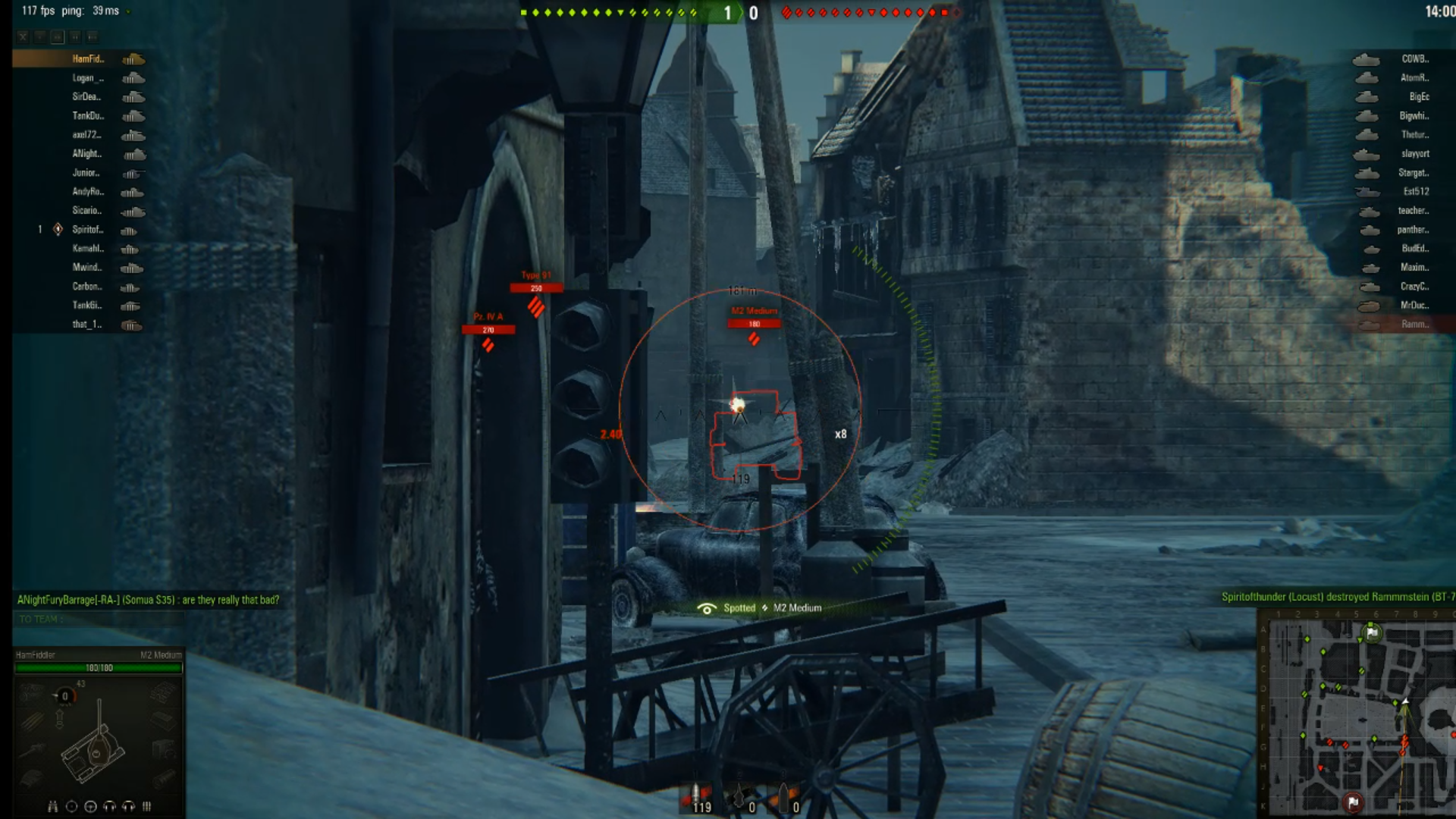 I see you, you sly devil

Despite being a World of Tanks noob, I can appreciate the game. I am not totally sold on investing the rest of my life into playing the game, but I will likely jump on occasionally. If you are looking for a fun game to play, where the PvP matches don’t take 25-50 minutes, World of Tanks is for you. Play a little, or a lot, it’s no big deal. If you play a little, you will likely see me on there, barely improving over time. Be sure to put a shell up my tailpipe.