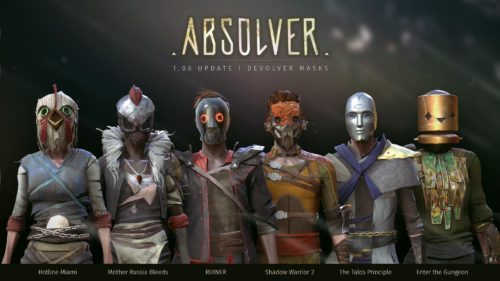 For those of you who took the plunge and got Absolver within the first few weeks of release it has likely been a tiresome play though. The game has been riddled with issues, namely connection problems and it never really felt completed. The PVP lacks rewards or ranking to keep players interested and the PVE feels like an afterthought.

Luckily Sloclap appears devoted to smoothing out the game and has pushed out a consistent stream of updates to improve the game. They have mentioned expanding PVP to more than 1v1, improving what PVE has to offer and adding an assortment of new items. While none of this has yet been accomplished, the patch that went live today (Sept. 20, 2017) looks like it will keep me happy in the short term.

As I am sure you can tell from the giant picture that Absolver put up, the main focus is the new loot. For update 1.06 there is the addition of 6 new masks, each one inspired by Devolver games. The Sloclap team mentioned along with the announcement of the patch going live that the masks are available to everyone. “We’ve added new masks in the Guidance HUB…we wanted to make new masks available to everyone”. Things will change in the future regarding how drops will work from combat trials so in the meantime we get to enjoy these few gems.

The Rest of the Update

The rest of the update appears to me more technical in nature. The masks may be more flashy and encourage more time in game but I think the remainder of the update will have a big impact on the playability of the game. The patch includes fixing crash issues, balancing special abilities, improving specific attacks, improving 1v1 issues and overall performance optimization. If you want to check out the specifics jump on over to the official Absolver patch release page. It has been a little while since we here on Hold to Reset have ventured into the world of the Absolvers and this update has us itching. It doesn’t get everything done that I have been hoping for the game to implement soon but it is at least a step in the right direction.

Let us know which new Devolver mask you will be reping in the pit below. That way I can know who to keep an eye on while I am crushing out combat trials.