What is That? Wargroove Looks to DS Classic For Inspiration

I’ve been a fan of Chucklefish Games since they released Starbound back in 2016. Since that time, the studio/publishing house has remained rather busy partnering on other people’s indie titles (they did the console port of Stardew Valley). Now Chucklefish has begun developing a new game called Wargroove, which is slated to release sometime this year. So what exactly is this new indie game from Chucklefish? Let’s take a look! 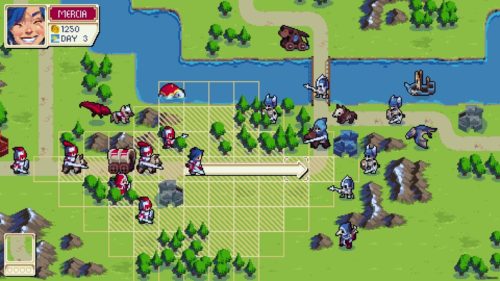 Chucklefish’s next title is heading back to the DS days for inspiration.

Wargroove is a “turn-based strategy game for up to 4 players, in which each player takes control of an army and its commander unit to wage war on their enemies!” If you watched the trailer and read the above description, a game by the name of Advanced Wars for the DS more than likely came to mind. Chucklefish addresses this comparison in their FAQ, stating:

Wargroove aims to recreate the charm and accessibility of the titles that inspired it while bringing modern technology into the formula. This modern focus allows for higher resolution pixel art, robust online play and deep modding capability, ultimately creating the most complete experience for Advance Wars and TBS fans.

So from the sounds of it, we are getting a more modern take on the Advanced Wars formula which includes features such as online play and modding capability. Recent livestreams by Chucklefish revealed some of the game’s player creation capabilities, and they are deep. Things like creating your own game mode, making a campaign, and so on, will all be readily at the players disposal. With such a deep collection of tools available, I expect Wargroove to feature some pretty funky community made scenarios.

As of right now, there is no official release date for Wargroove, but they hope it will release sometime in early 2018. The game will launch on PC, Nintendo Switch, and Xbox One, with the possibility of other platforms in the future.

To follow along with the game’s development, check out the game’s blog.

Thoughts on Wargroove? Let me know in The Pit below.