It’s been a while since I’ve done a Twitch Tuesday (last one was Reckful in June of 2017), but I felt like throwing one together today. If you don’t know, Twitch Tuesday,  is (was?) a monthly segment where I highlight a Twitch Streamer I’ve been spending my time watching. The last couple of weeks I’ve been watching The_Happy_Hob, a crazy English streamer who has built his channel on attempting no hit runs of the Dark Souls series. 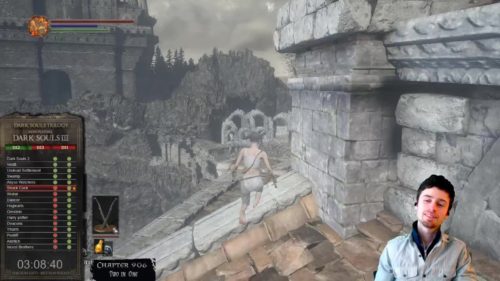 While completing a single no hit run in any of the Dark Souls games is impressive in its own right, The_Happy_Hob has already done that, and is now attempting to complete the trilogy run. That’s right. Every Dark Souls Game in succession without getting hit. As a semi-competent Souls player myself, I find him to be on an entirely different level with seemingly unshakeable levels of patience and perseverance.

This perseverance often lands The_Happy_Hob at the end of crazy bets with his chat. The most recent, and pretty hilarious bet, was if The_Happy_Hob did not complete the trilogy run by midnight on January 20th, he would have to shave his head. The_Happy_Hob crushed out an insanely long 18 hour stream in an attempt to succeed, but ultimately was unsuccessful. The next broadcast, he shaved his head in what was a pretty entertaining stream.

Besides being good at Souls games, The_Happy_Hob happens to be an entertaining streamer as well. His stream is full of memes, running jokes, and an overall chill vibe. You can put the stream on for a good laugh, which is something I really appreciate.

If you like Dark Souls challenges and laughs, check out The_Happy_Hob every weeknight at 5 EST.

Watched The_Happy_Hob stream? What did you think? Let me know in The Pit below.