To say it has been a good past couple of months for Twitch streamer Ninja is probably the understatement of the year. Ninja has been setting an absurd amount of Twitch records lately like reaching a mindblowing 178K+ subscribers, breaking 3 millions followers (most followed channel on Twitch), and averaging concurrent viewership that is consistently in the 100k’s. Not satisfied with these numbers, Ninja set another record today by streaming Fortnite Battle Royale with a number of famous people including Drake. Yes that Drake. 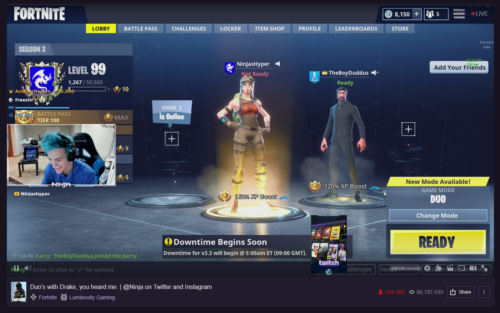 A screenshot from Ninja’s stream during the mad viewership rise.

The stream started with a number of matches of Duo games featuring Ninja and Drake. During this time stream viewership numbers hit ~607K viewers. The duo was then joined by TheKimDotcom and a “Drake fourth” for a Group match. The match resulted in a win. TheKimDotcom then dropped out for Travis Scott to join and the group jumped into another group match. During this time, Ninja’s stream hit close to ~670K viewers. For a single streamer, Ninja’s stream is the highest number of concurrent watchers in Twitch history and easily surpasses records previously set by both DrDisRespect (~400K) and Tyler1 (~390K).

Ninja has been part of Twitch since 2014, and got his start playing Halo professionally. After exiting the competitive Halo scene, Ninja focused on streaming. Through the first few years, Ninja was fairly popular and found himself in the upper 10% of streams. Recently, however, Ninja has seen his channel explode due to the immense popularity of Fortnite Battle Royale. You can see just how insane Ninja’s rise has been in the Social Blade graphs below.

As you can see, Ninja’s Twitch channel has been exploding lately.

The success of Ninja’s stream highlights the amount of untapped potential Twitch as a platform is currently sitting on in comparison to larger competitor, YouTube. With an Alexa rank of 32 Globally/13 in the USA, Twitch has plenty of traffic left to tap into, and streamers of Ninja’s size may just be what are needed to elevate it to that YouTube level.

More: A Fortnite Guide for Beginners.

Thoughts on Twitch streamer Ninja’s viewership record? Let me know in The Pit below.