Like most people, I had no idea there was a closed beta going on. I heard about it from a friend that knew I was a series fan. I have a lot of time in Shogun 2 and Napoleon. I’m a big fan of empire building, and the unique combat system, so I thought a multiplayer version would be a load of fun. My feelings have been decidedly mixed since playing.

What is Total War Arena?

In Total War Arena, you are in control of 3 squads of units, with teams composed of ten players to a side. Multiple commanders are available to play, and a moderate amount of unit diversity available immediately. The longer you play, the more units and commanders you can unlock. Three maps are currently available in the closed beta, a coastal map, a rugged terrain location, and a city. Each map is uses significantly different terrain features to sculpt the flow of battle. 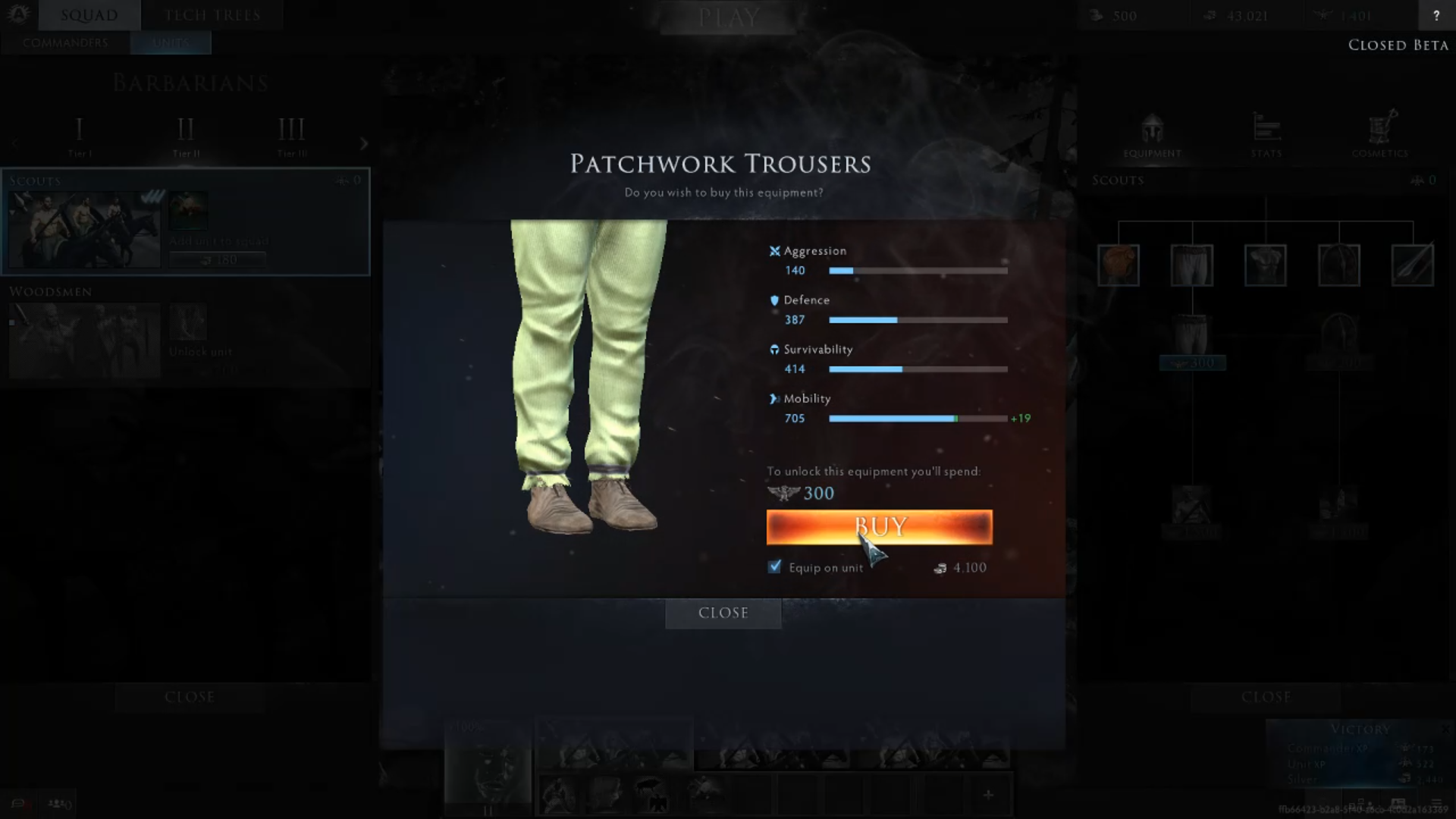 New pants? I guess i could splurge a little.

The game gives you a commander from each of the three nations available in the game. Each controls a different tech tree of units. Each commander has their own abilities to boost the effectiveness of the forces they command.

Cynane is Greek, and starts with the option of foot archers, or hoplites. The archers are the games most significant ranged units, with great damage at a distance, and total uselessness in melee. The hoplites are great on defense, particularly against mounted units, but perform with mediocrity in prolonged melee combat against the Roman foot soldiers. 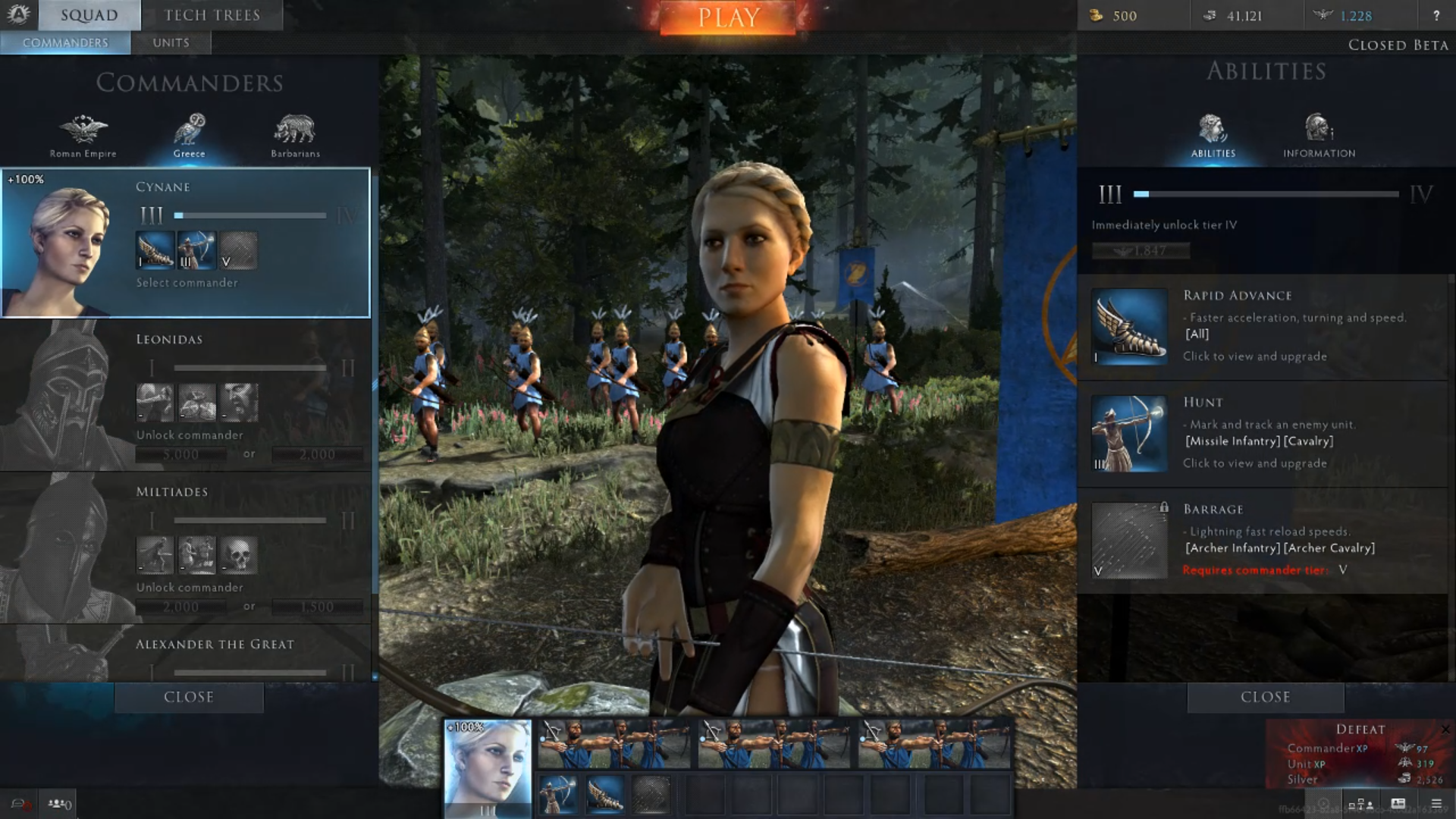 The Greek tech tree expands into significantly more devastating archers, and more potent foot soldiers. The tech tree gives the player the choice in what sort of combat they want to specialize in. 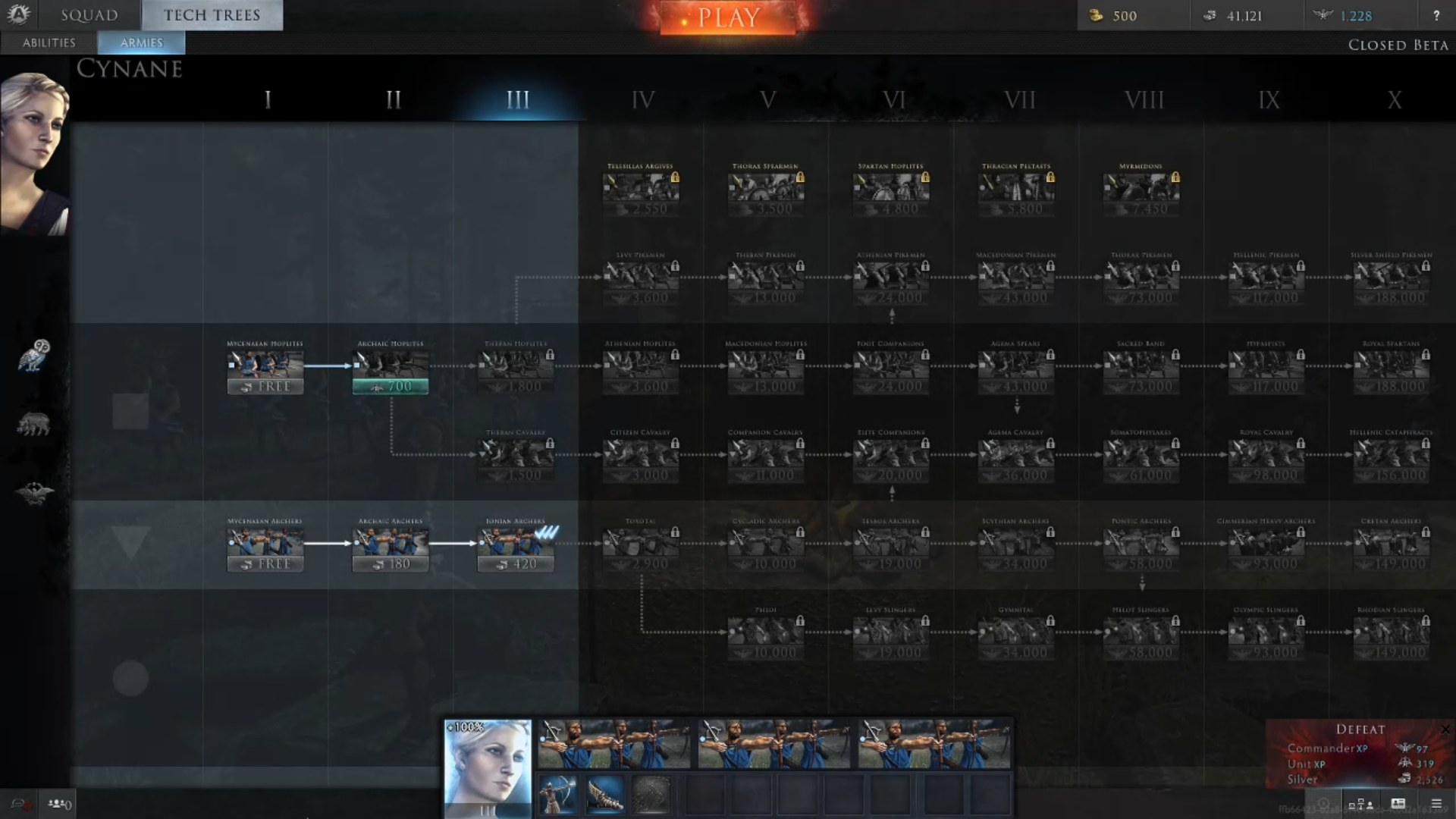 All the sweet, sweet upgrades.

The Roman focus is on heavy infantry. These perform wonderfully over a prolonged engagement, delivering persistent damage. They also have the ability to throw spears before engaging in melee combat to soften up their opponent. I found playing the Romans to be somewhat engaging, but it felt like they lacked the dynamic nature that other units provided. 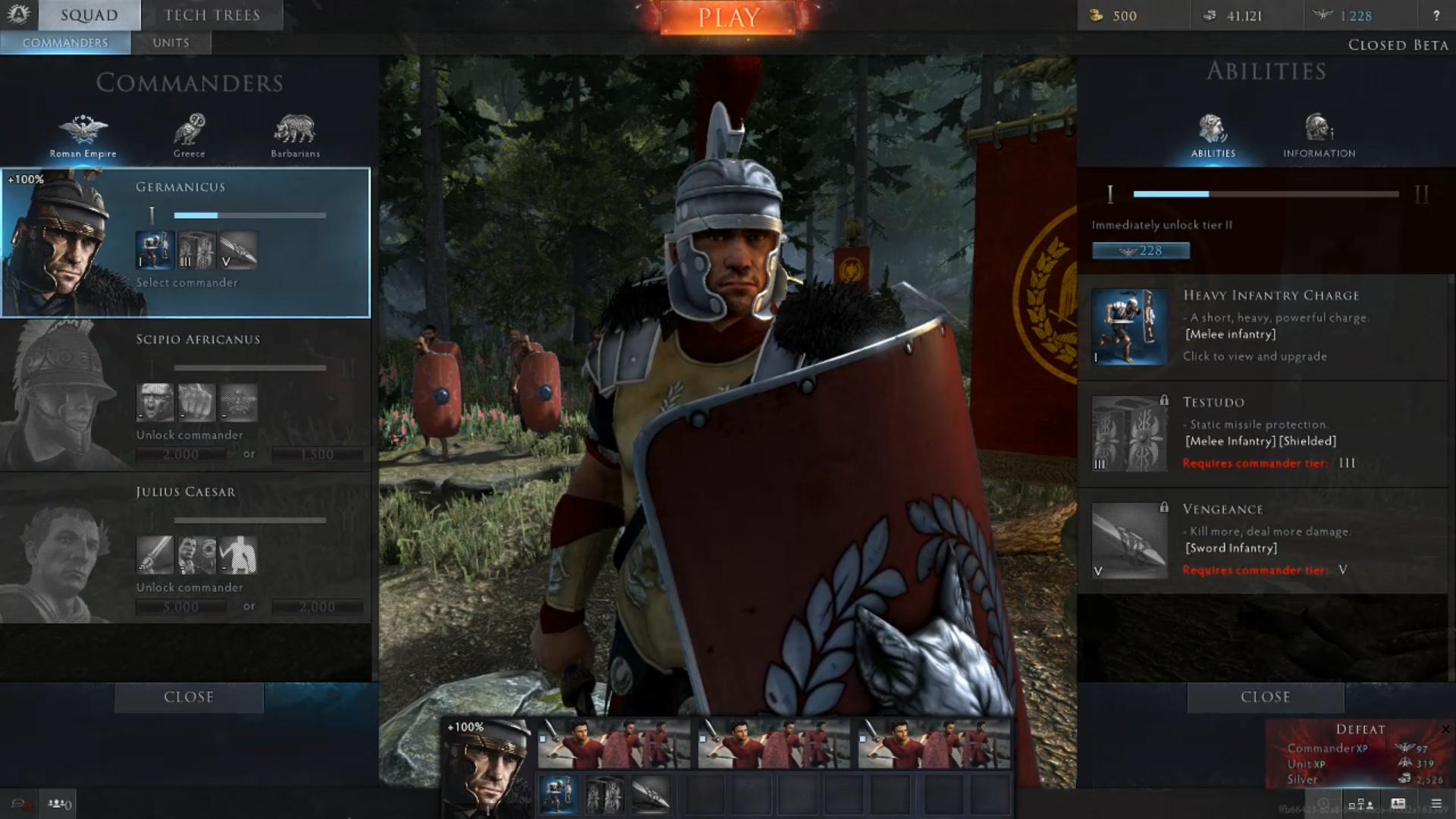 A big bonus to the Roman tech tree is the unlocking of heavy artillery. Catapults become available later down the tech tree with the ability to destroy swaths of enemy troops, particularly if they are bunched up in a extended fight. 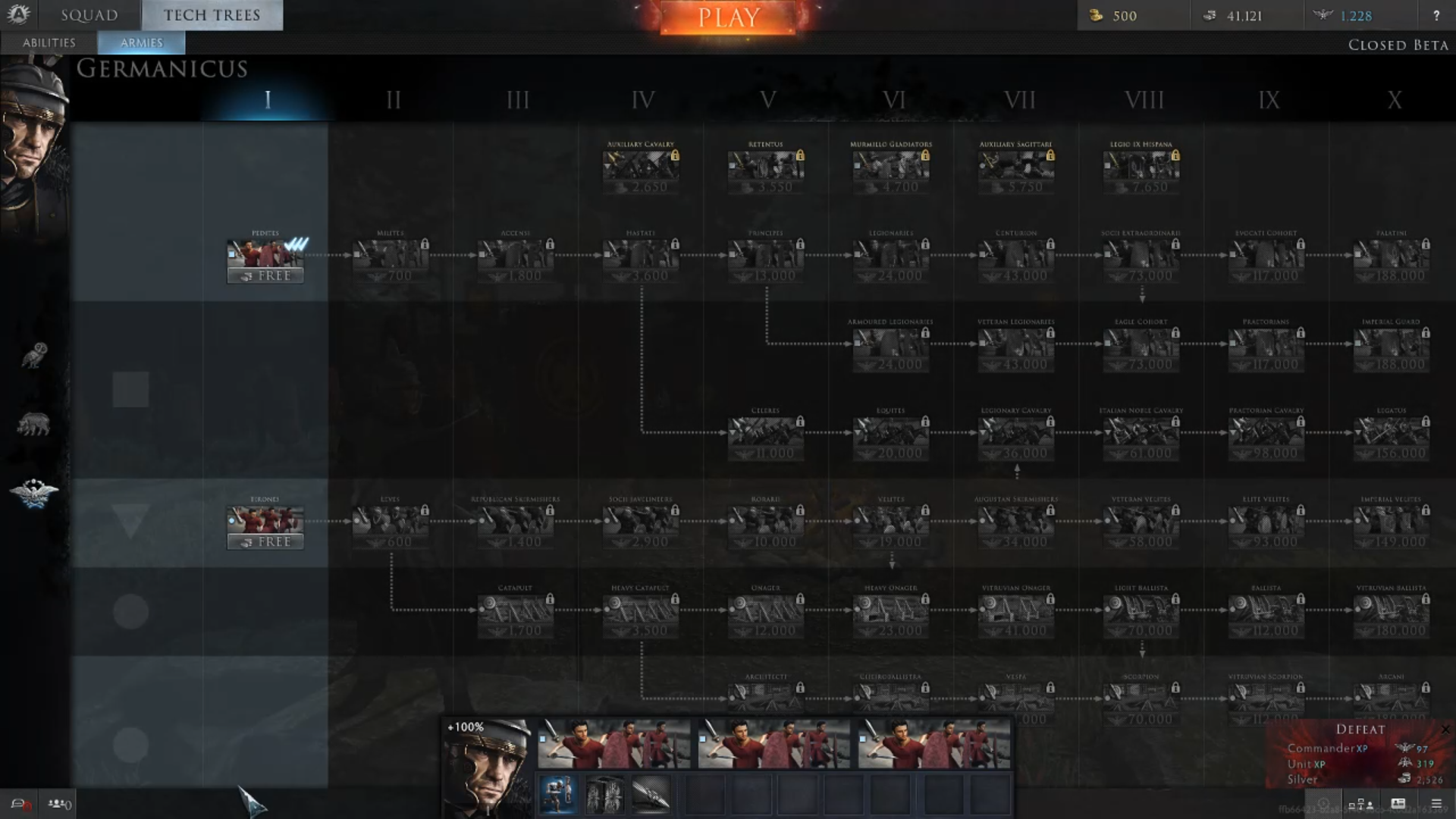 Lots of infantry options, and catapults!

The barbarians start with mounted units that are totally, and completely unfairly, overpowered. I would have loved the game if it weren’t for the frustrating nature of cavalry. 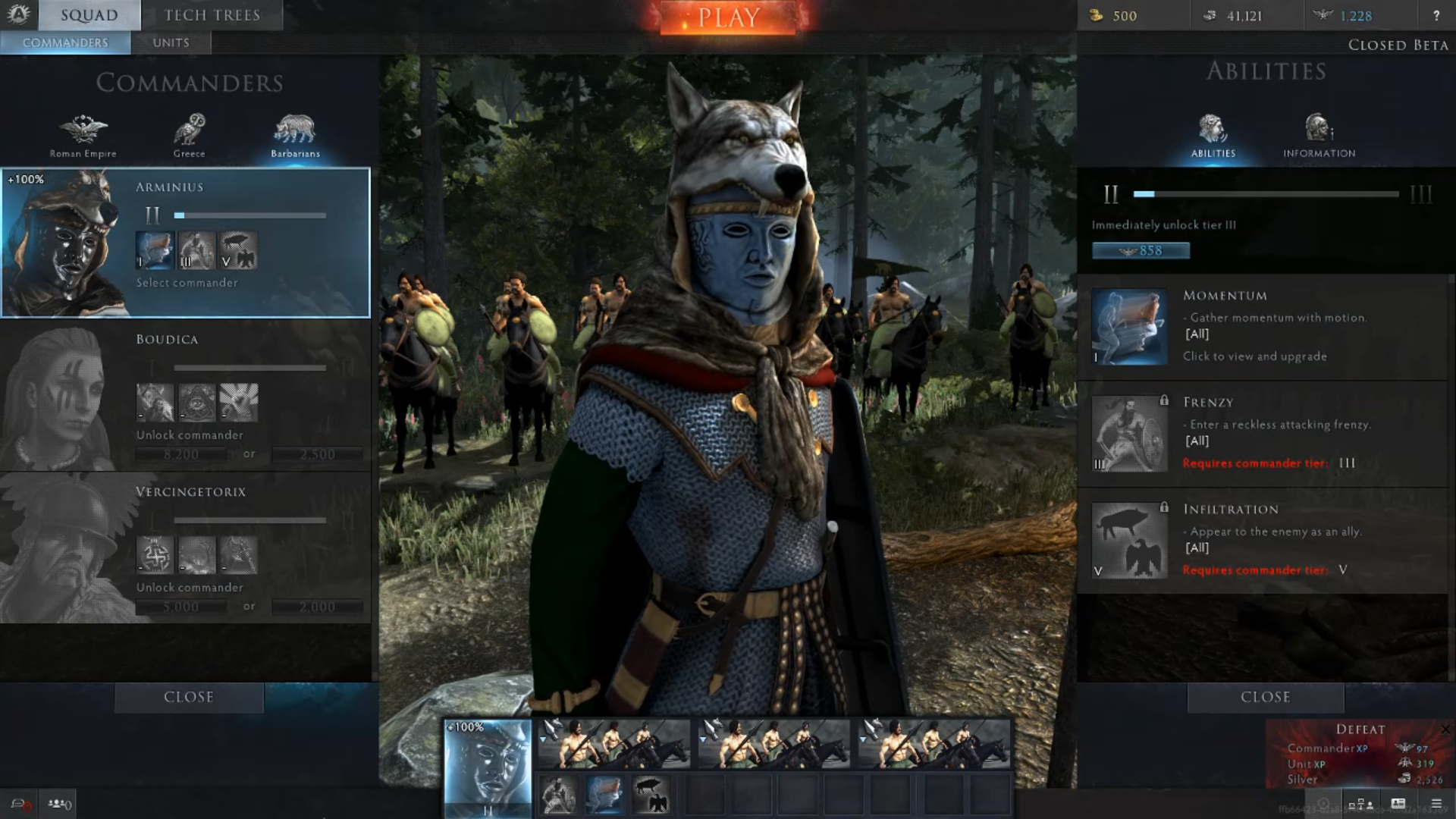 The most boss looking commander

Cavalry are high mobility units, that can deal unbelievable initial damage. The starting mounted units are called shock cavalry, and they live up to that description. They will obliterate you shockingly fast, then disappear just as quickly as they ruined your army. I have really enjoyed playing the mounted barbarians as I galloped around the map, ruining the day of every archer and siege unit I could find. 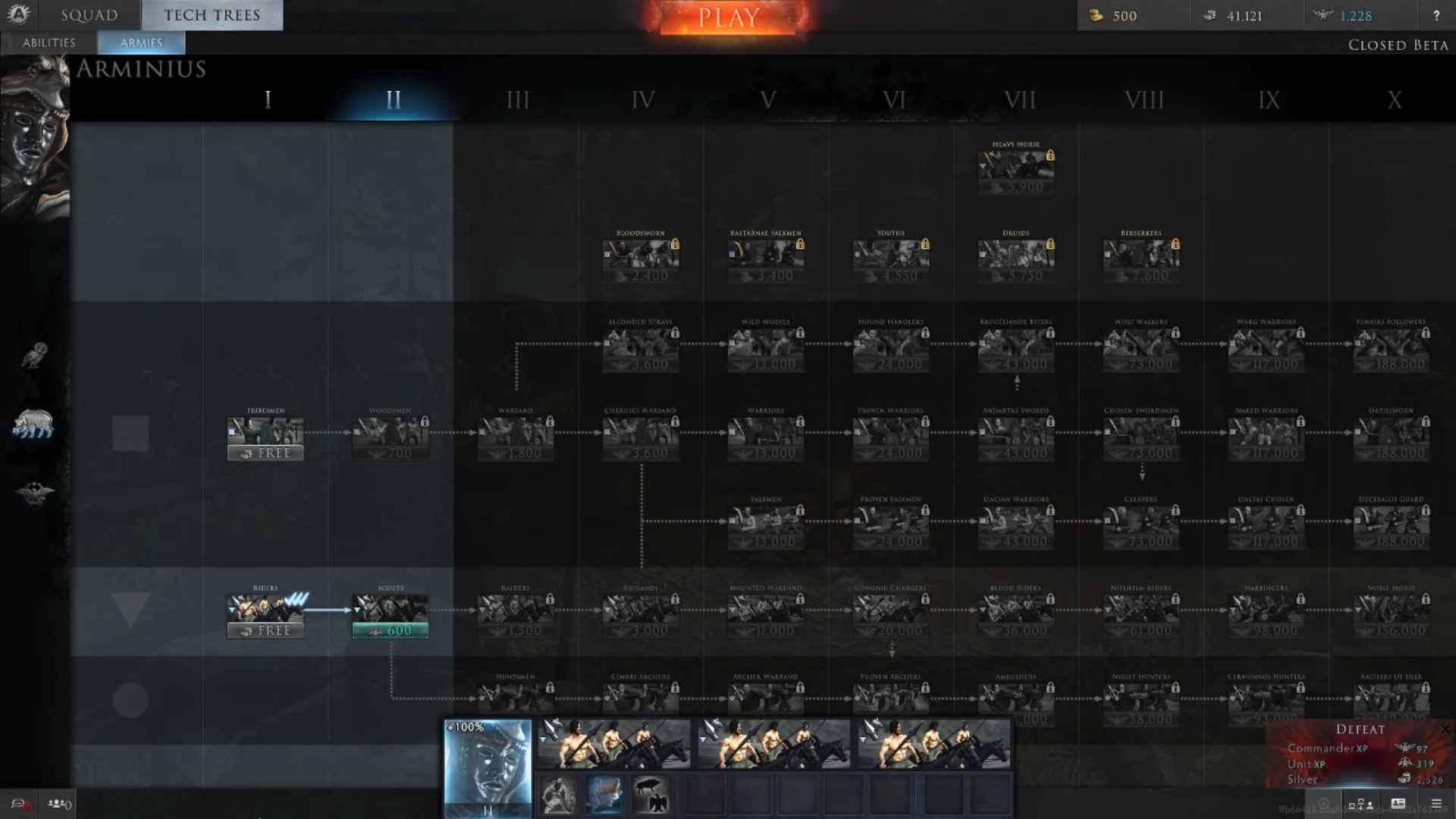 So many ways to trample your foes

I saw very few dropped players in game. I was pleasantly surprised to find this, especially since linking 20 people together can be a bit of computer trickery. A brilliant added feature by the developers is the ability to control the units of a disconnected player. I was obliterated in a game (by horsemen of course) and was scrolling around the map and found three units of heavy infantry sitting motionless. Controlling disconnected units was very easy and pretty fun. These units ultimately proved essential to victory for my team.

The only downside as far as connectivity is concerned was matchmaking time. Waiting over 1 minute was typical, and over 2 minutes not uncommon. I wondered if this was due to connection problems, or the game trying to balance unit diversity. It seemed when I was trying to be the mounted barbarians my connection times increased. 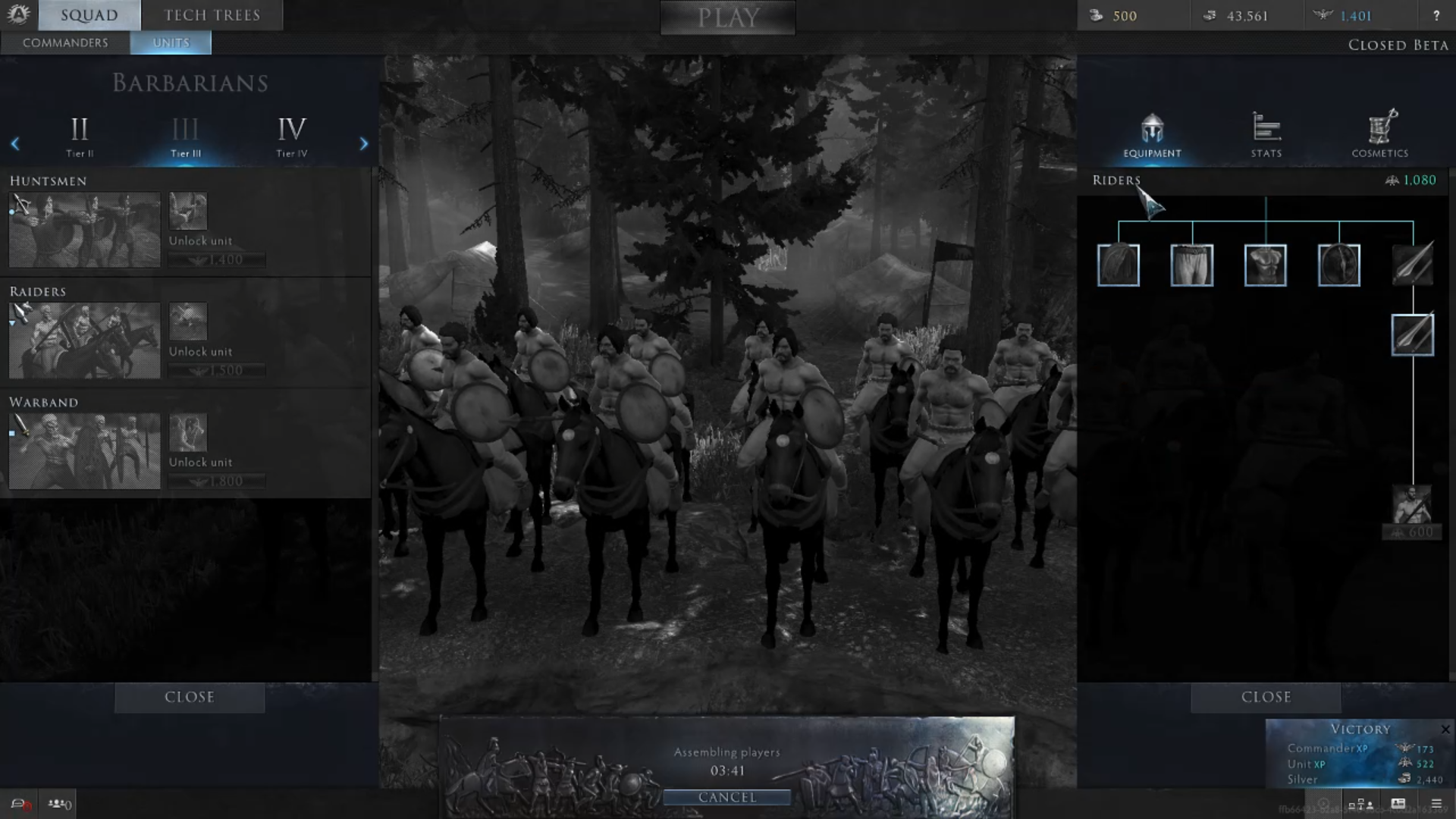 Why is this taking so long???

My favorite part of Total War Arena is the after-play statistics. You can see you kills and losses, as well as the breakdown for where your experience comes from. The game rewards behavior that isn’t limited to killing. Capturing the enemy base yields rewards, as well as capturing lookout points on the map. I thought this was a nice way to create a better strategic feel for the game as a whole. It rewarded teamwork, which can be lacking in many online games. 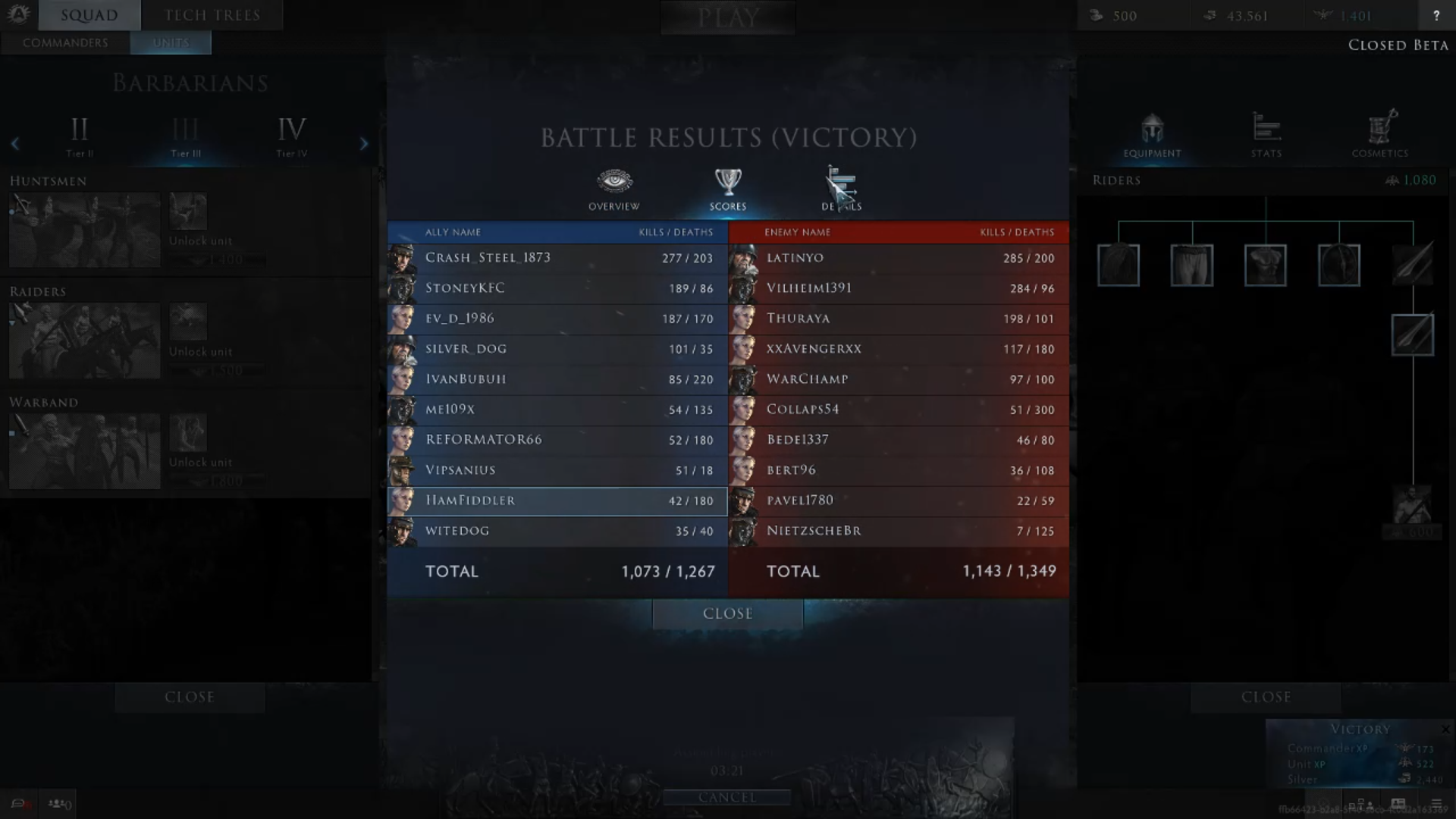 I may have been surprised from behind…

Reading the breakdown helped me develop my strategy, and get more money and experience for my troops. 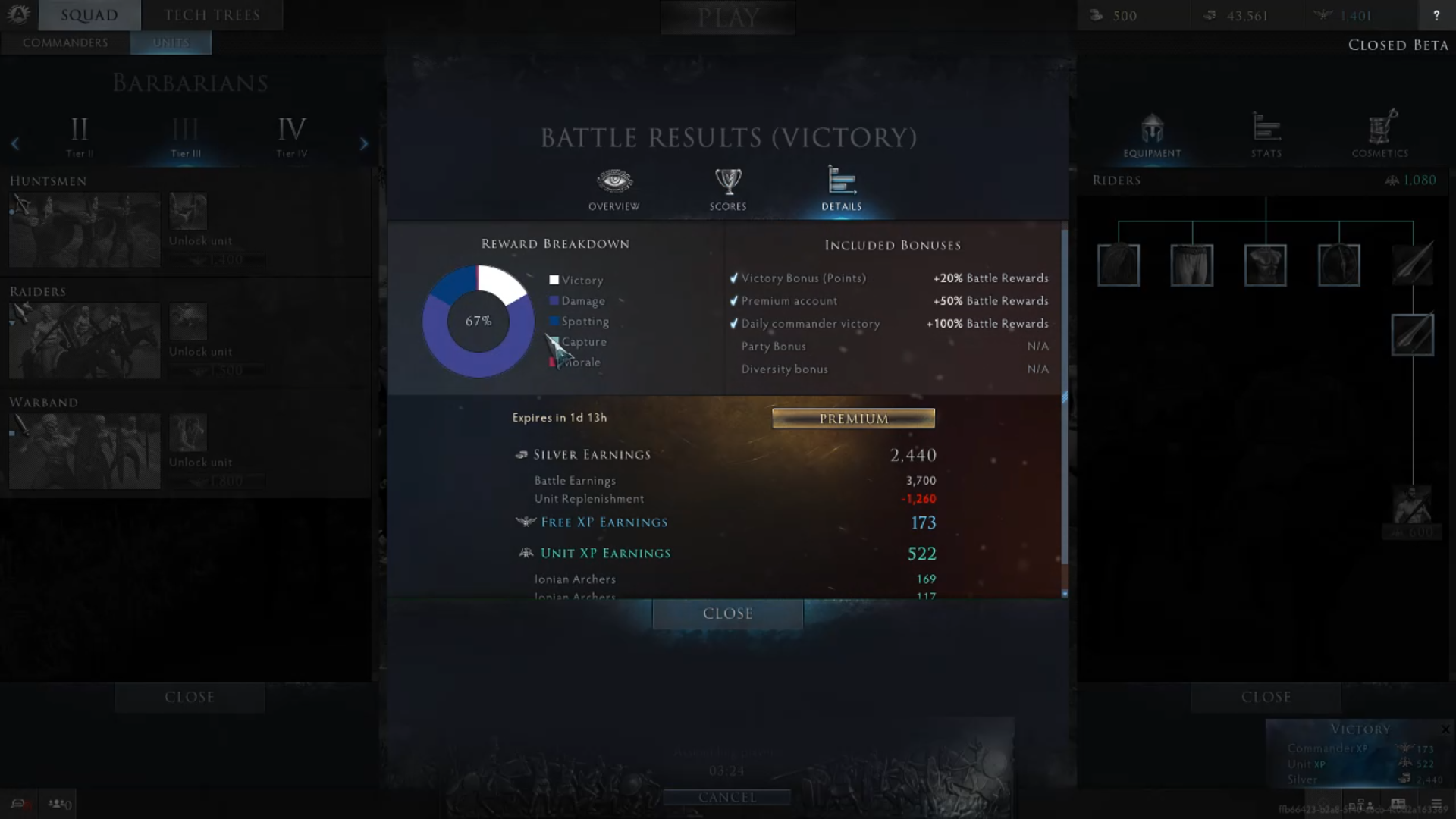 Show me the money!

Total War Arena takes a great single player genre, and dilutes the playability to hopefully break into the MOBA genre. The game does a poor job of allowing communication between players. Besides an in-game chat and a crummy ping system, there is no way to coordinate with allies or call for help. The horrendous imbalance between the mounted units and all other ground units is tragic, and glaringly obvious. Once horsemen get behind your lines (which is extremely easy) they can kill as much as they would like. Mounted units are extremely hard to catch. The dedicated anti-horse foot units will never engage with a mounted unit unless some error is made on behalf of the horses. Ranged units are a lot of fun, but the susceptibility to mounted units, and the poor coordination options between allies make playing ranged more a game of chance than skill. 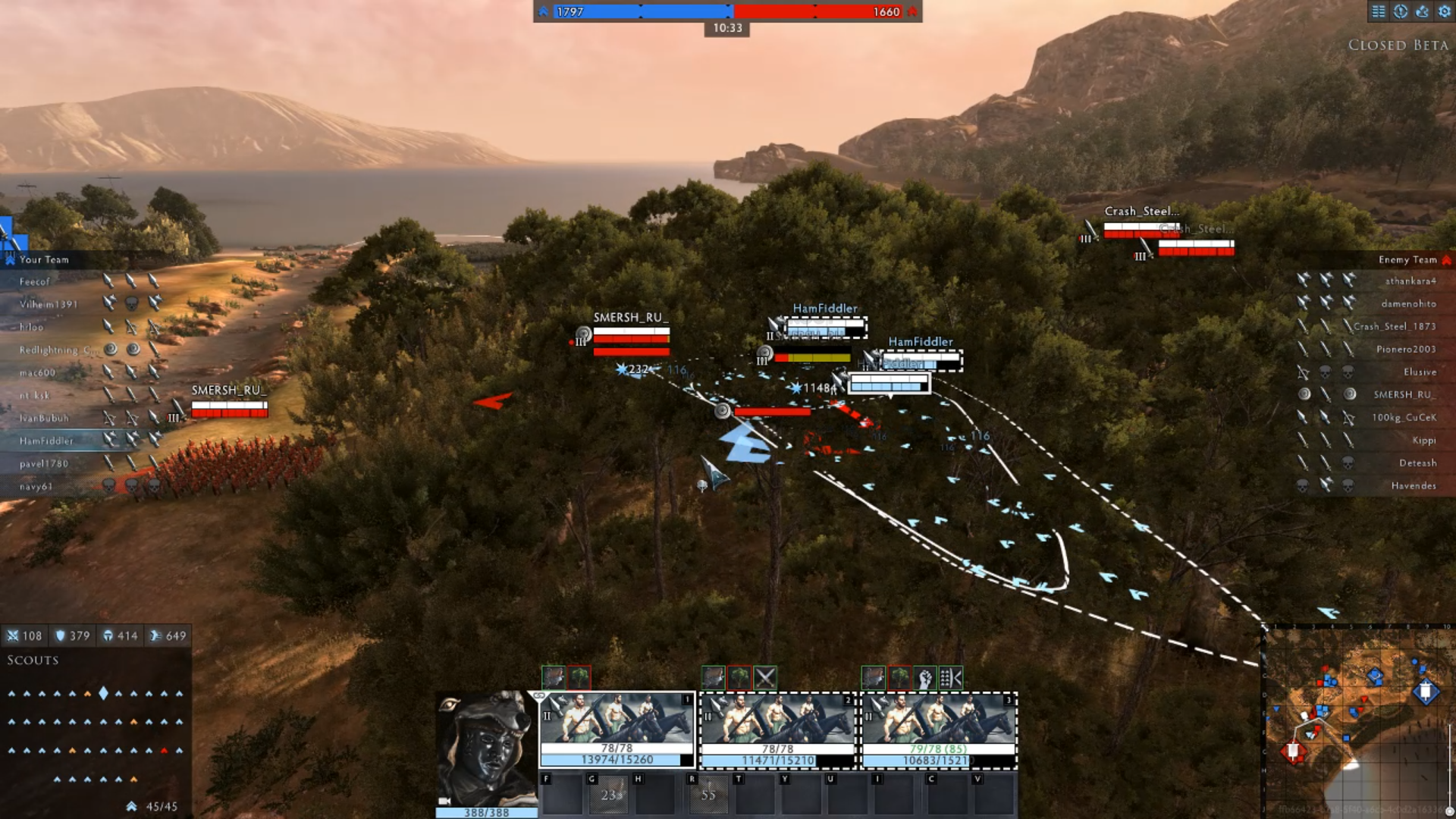 The enemy health bar is being decimated. This took less than 1 second. Things may be unbalanced around here.

In conclusion, Total War Arena has a ways to come. The maps feel repetitive, with the areas of conflict really rigidly defined. The beauty of the Total War series is being the boss! Feeling in charge! Total War Arena is totally different, making you feel exposed in an out of control battle. The only factor that kept me playing was the desire to unlock more units. I wouldn’t mind getting my hands on top-tier squads and decimating my foes. Until that point, the game feels a bit like a grind. 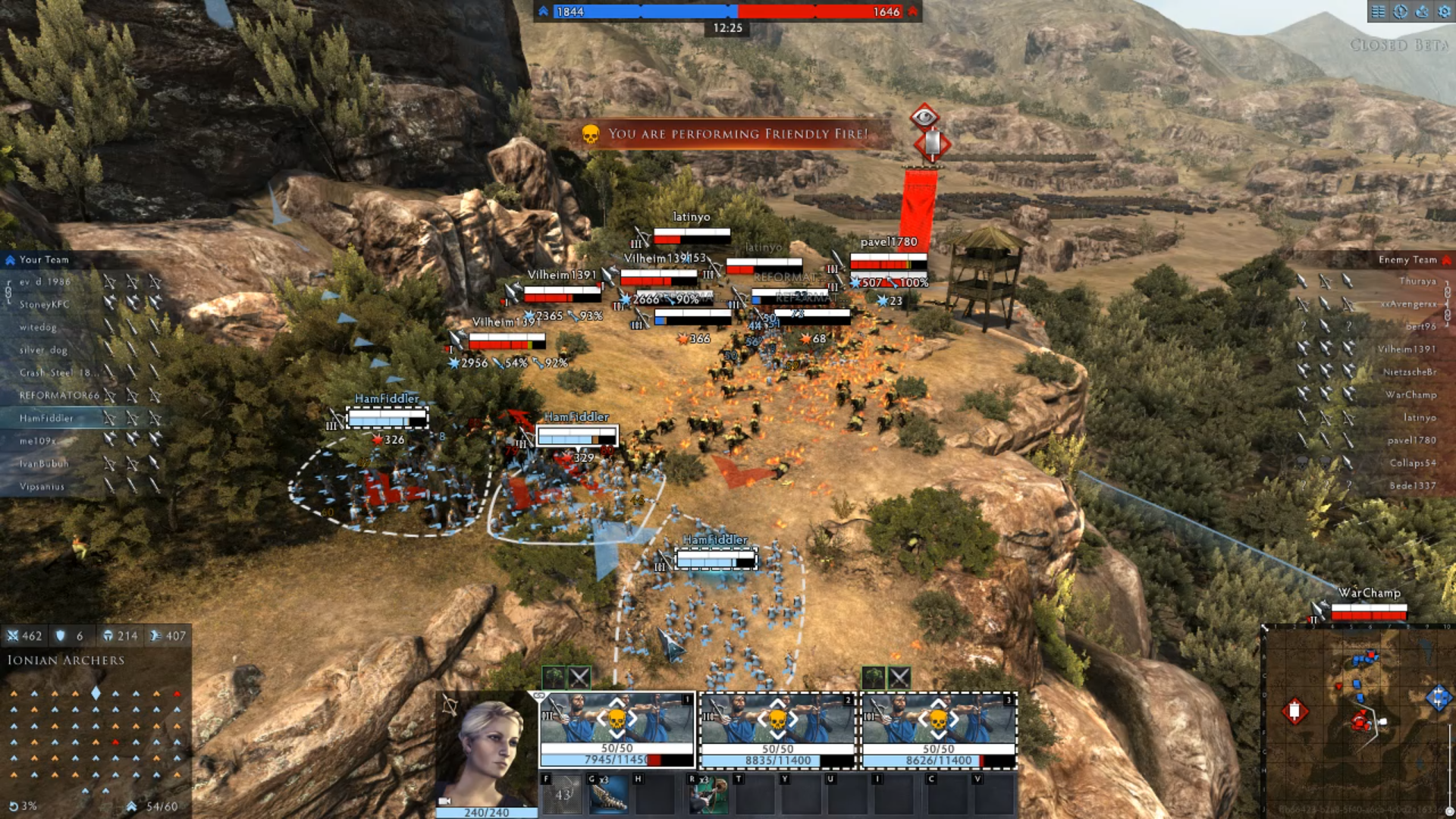