A couple months back I covered streamer The Happy Hob on my Twitch Tuesday spotlight. This streamer complets no hit runs (not taking a hit) of various games with a focus mainly on the Soulsborne series. Having completed each Dark Souls game no hit, The Happy Hob has been working on what has been dubbed “Trilogy”. The Trilogy run involves completing all three Dark Souls games in a row without getting hit. After months of attempts, Hob has successfully completed The Trilogy run.

Clocking in at 9 hours and 28 minutes, the successful no hit run of all three Dark Souls games was the work of many months of attempts and heartbreaking defeat. The Happy Hob’s previous closest attempt ended on the Cinder fight after having completed no hit runs on the previous two games (Dark Souls 1+2). Throughout the struggle, Hob continued to try Trilogy runs until eventually completing it tonight. You can see his reaction to completing the no hit run here. 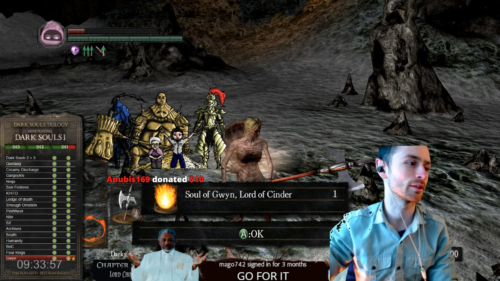 The Happy Hob after completing the Trilogy run (no hitting all Souls games in a row).

Now that Hob has completed the Trilogy, he has his eyes set on the God Run, which is no hitting all five Soulsborne games in a row. Given the amount of time the Trilogy took, it’s safe to say that this challenge will be rather difficult.

Regardless, congratulations to The Happy Hob for completing such a crazy gaming feat. Good luck on the God Run!

Thoughts on The Happy Hob Trilogy run? Let me hear them in The Pit below.