The Division Weapon Balance Coming in 1.3

Have you been playing The Division recently and noticed a large majority of players running AUGs/Vectors and M1As? The Division Weapon balance has been an issue since release (the beta handle it better), but appears to finally be getting addressed in the forthcoming 1.3 update. For those out of the loop, the current system only grants inherent bonuses to SMG and Marksman rifle class weapons, causing the meta to revolve solely on these two classes of weapons. Recently Massive laid out there plans for 1.3 and how weapons will be adjusted. Some of the major points are below: 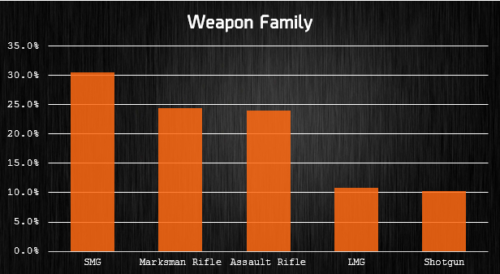 Look at this balance… Shotgun #FeelsBadMan. Graph courtesy of Massive

I am not a scientist, but it appears both LMG and Shotguns are useless. Massive has recognized this and will be doing a bunch of things in order to address this:

Basically what Massive is attempting is a shift in the meta that should have taken place earlier within the games cycle. I am excited in seeing how the new tweaks shake out and hope this brings a bit of spicy to the game.

While it remains to be seen how 1.3 shakes out, what are you thoughts on the new changes? Let me know in the Pit below.