Shadow of the Tomb Raider game editions have been revealed today.

There are a total of four editions available for purchase for fans looking to buy the newest Tomb Raider. These editions are as follows: Standard, Digital Deluxe, Croft Edition, and Ultimate edition (all of which will be available for all platforms). Preordering any of the latter three editions will earn you early access to the game 48 hours before launch. Let’s take a closer look at each edition below.

The Standard Edition ($59.99) is the cheapest and least item filled edition on offer. In the Standard Edition you will get the base game along with a couple of extra goodies for pre ordering: additional skills booter pack and platform specific theme/wallpaper/avatar outfit.

The Digital Deluxe Edition ($69.99) of Shadow of the Tomb Raider features more extras than the Standard Edition. Besides the base game and the Standard edition pre order bonuses, this edition also features the game’s OST and an additional weapon/outfit. You also get access to the game 48 hours early if you preorder this edition.

The Croft Edition ($89.99) includes all the items of the Digital Deluxe Edition with a number of additional items. Included in this edition are three additional outfits along with the Season Pass. You also get access to the game 48 hours early if you preorder this edition. 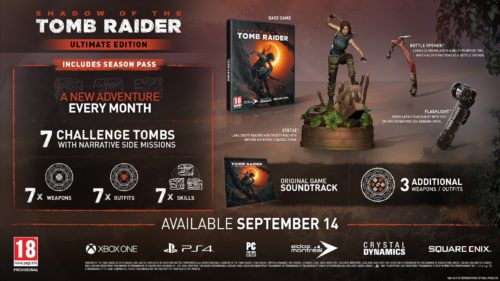 The Shadow of the Tomb Raider Ultimate Edition features a number of physical items.

The Ultimate Edition ($199.99) is for those super fans of Tomb Raider who want to add physical items to their collection. In this edition, buyers get everything found in the Croft Edition plus a flashlight, a bottle opener that looks like a climbing pick, and a Lara Croft statue. You also get access to the game 48 hours early if you preorder this edition.

Content in the Season Pass has not been officially revealed, but we do now that there will be 7 challenge tombs (with narrative side missions), 7 weapons, 7 outfits, and 7 skills the will release every month.

Shadow of the Tomb Raider is set to release September 14 on PC, Xbox One, and PlayStation 4.

Thoughts on the Shadow of the Tomb Raider game editions? Which will you get? Let me know in The Pit below.