In what should come as no surprise to literally anyone, Rockstar has officially announced Red Dead Redemption 2. Leading up to the reveal, Rockstar tweeted out a few pictures hinting at a new game in the works. The announcement itself is generating huge amounts of hype on the internet. Here are some interesting tidbits that have emerged about the new western. 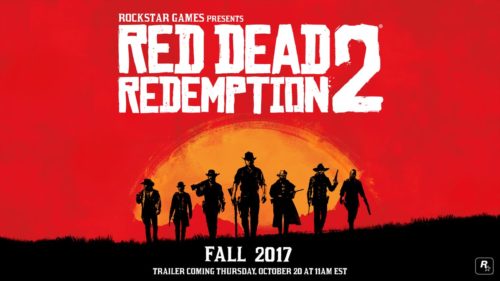 There is a trailer coming October 20th at 11 AM ET. Red Dead Redemption 2 is set to release in the Fall of 2017. While it is not concrete, the game appears to only be coming to PS4 and Xbox One in the interim. Like GTA V before it, I imagine a PC version will come eventually. Not much else has been revealed, however the page Rockstar used for the game reveal does briefly mention multiplayer. Rockstar says, ” The game’s vast and atmospheric world will also provide the foundation for a brand new online multiplayer experience. ” What this means for the series remains unclear. However it is pretty easy to bet that there will be some form of Shark Card like microcurrency for players to purchase to their hearts content.

What did you think of the Rockstar reveal? Are you excited for Red Dead Redemption 2? Let me know in the Pit below.