Home » Walkthroughs » Radical Heights Guide: Cash is King – How to Get Cash, Where to Spend It

Radical Heights Guide: Cash is King – How to Get Cash, Where to Spend It

Update: Radical Heights no longer exists as a game and Boss Key Productions has dissolved as a studio. 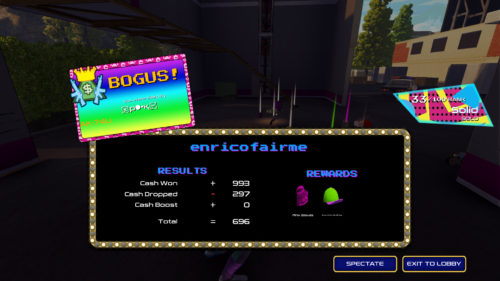 At the end of a match in Radical Heights, you will see your results, including the cash won and rewards found.

Unlike other battle royale games, Radical Heights places heavy emphasis on acquiring in game cash. This cash literally rules every aspect of the game and can be used to buy things like cosmetics and in game advantages (more on that later). Since cash collected during matches goes into your “Offshore Bank Account” there is more emphasis on constantly acquiring cash while you play. To highlight this, I’ll be looking at the role of cash in Radical Heights below.

While running around looking for cash can net you a reasonable amount in short order, there are some ways of improving the amount of cash you can (possibly) collect. These ways are built into the game and can prove very beneficial to you. 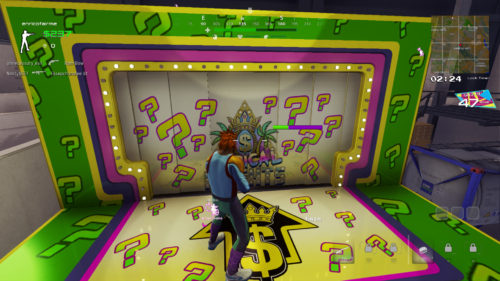 Inside Mystery Doors, you will find a collection of items and prizes. Hit these to make some serious coin.

Out in the world, you will come across closed doors with ??? and $$$ on them. These doors are called Mystery Doors and they require the player to stand in front of them (on the marked area) for 10+ seconds before they will open. Inside these little rooms the player will find a collection of random items and prizes. 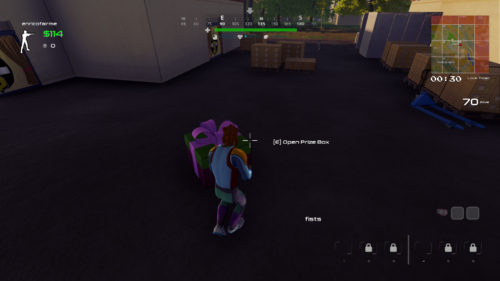 Prize Boxes are spread across Radical Heights. Inside them you will find items and prizes. 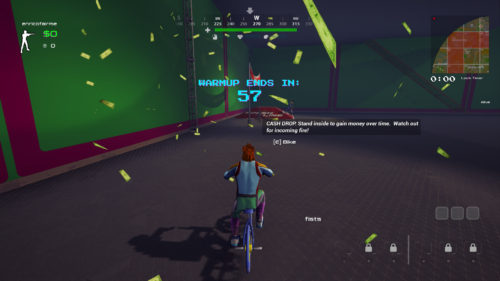 Cash Drops occur randomly during matches in Radical Heights. These events literally involve cash raining from the sky onto players within certain areas. When a Cash Drop is available on the map, make it your priority to get there as soon as possible. Standing inside the Cash Drop will net you a serious amount of Cash (can be $4k+). This is easily one of the fastest ways to gain some serious cash. 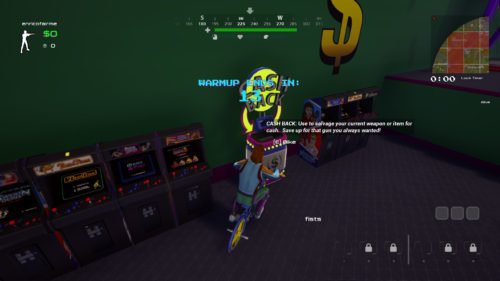 Drop your items into the Cash Back machine to get cash.

While out in the world, you will stumble upon machines called Cash Back. These machines serve as an item grinder which rewards you with cash. All you need to do here is drop whatever items you want into the Cash Back machine and you will be showered with cash.

Now that we’ve looked at how to acquire cash in Radical Heights, let’s take a look at what you can use that cash for. Turns out there are a few things we can do by having a fatty bank account. 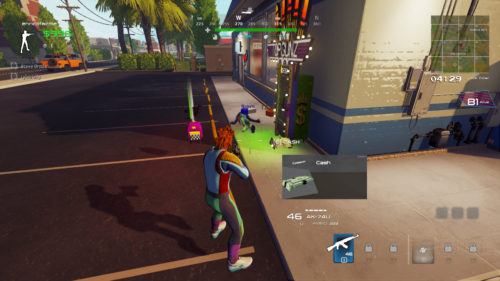 When you defeat an opponent, be sure to grab the cash they drop.

Since Radical Heights is a battle royale game, players can also attain cash through combat. Defeating other players causes a mini-loot explosion from which you can collect the defeated player’s items and a portion of the cash the had on them. If you are a good battle royale player, getting kills and looting bodies is a good way of increasing your bank size.

What to Do With Your Cash

If you’ve read up to this point, you are probably like, “okay we collect cash, but what can we do with it?” Since cash is the major driving force behind playing Radical Heights, there are a number of things to spend your hard earned cash on. Let’s take a look at them below. 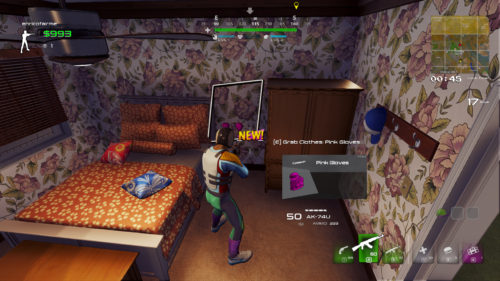 Be on the lookout for customization items in the world. 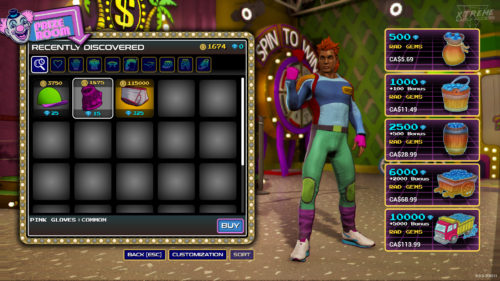 When you find an item, it becomes unlocked for purchase in the store.

Radical Heights features an interesting customization system. Unlike other games in the battle royale genre, Radical Heights requires you to unlock the items you want to buy. This may sound strange, but it actually makes a bit of sense. While you are playing the game, you will come across apparel items you can collect. These items range from common to rare and all are for character customization purposes only. Once you gather an item during a match it becomes unlocked in the store for purchase. You can purchase the items you discover with either in-game cash or game currency.

Besides purchasing customization pieces for your character, you can also spend money during matches on a variety of different services. These services will give you a leg up on the competition, but expose you to potential ambush. Let’s have a look at the various cash services in game. 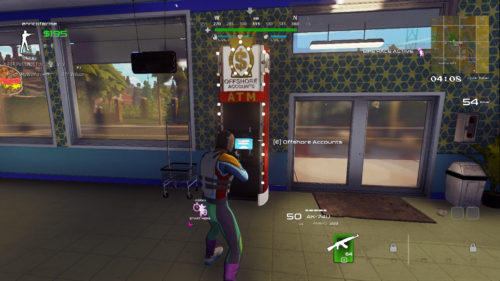 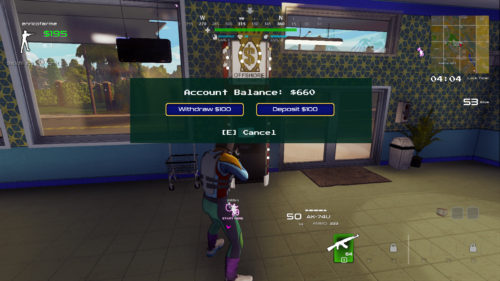 You can deposit money or withdraw money from an ATM.

Littered throughout the Radical Heights map are a number of ATMs. These machines serve a couple of purposes. The first is using the machine to deposit money you’ve collected during the match. The second is to use the machine to withdraw money from you account for the current match. Both choices can serve strategic purposes for you, but also leave you exposed during the transaction. 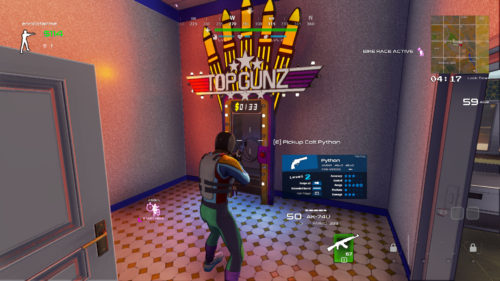 Gun vending machines are spread throughout Radical Heights. Purchase weapons from them.

If you want to spend some cash during a match, you will find a number of vending machines which serve different purposes. The vending machine called Top Gunz sells weapons of various rarity and can often feature some orange weapons for sale. 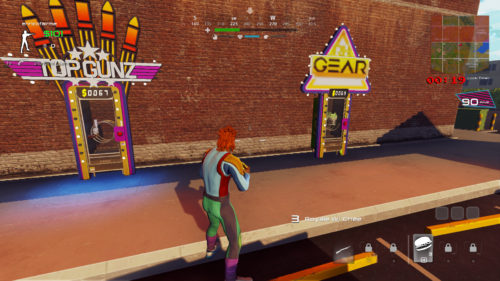 At the Gear vending machines you can purchase gear pieces for your character.

Gear vending machines sell exactly what the name suggests. At these machines you are able to purchase body armor and helmets with your in-game cash money. 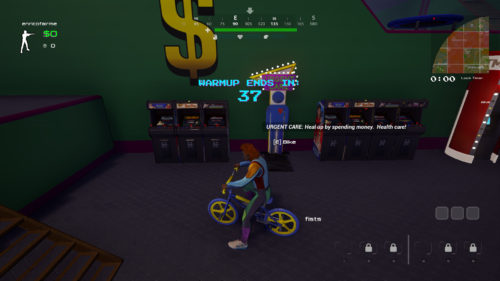 On demand health can be purchased from the Urgent Care machines.

The last vending machine you will find is the Urgent Care machine. Using this machine will allow you to pay cash for health. Each payment slightly heals you.

There you have it, a brief guide on how Cash works in Radical Heights. As you can see there are a number of things to do with cash, including buying customization and spending in-game. As the game changes, I will update this guide to reflect those changes.

Thoughts on this Radical Heights guide? Let us know in The Pit below.