Arkane Studios follow up to Dishonored 2, Prey, launched on May 5th. Prey is a reboot of the 2006 game of the same name. Bethesda acquired the rights to Prey back in 2011, leading to the eventual launch of the Prey reboot in 2017. Original Prey developed a bit of a following, which led many to wonder how a rebooted Prey would be. So how is Arkane’s take on Prey? Is the reboot any good? Below is my Prey review which will put to rest these questions. 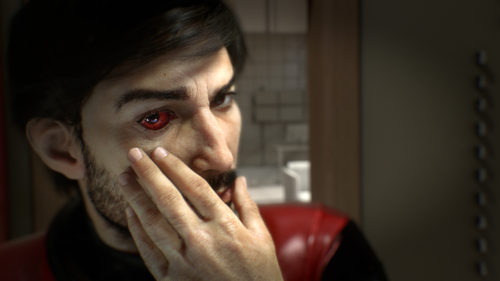 Does this look infected?

Prey is a first-person survival – horror – action game. The game was developed by Arkane Studios, makers of acclaimed titles like the Dishonored series and Bioshock 2. While Arkane Studios developed the game, publishing was handled by Bethesda Softworks. Prey was released on PC, Playstation 4, and Xbox One. 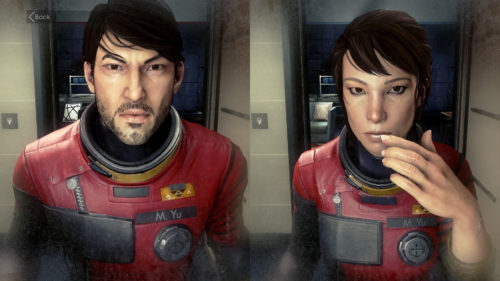 Morgan is a gender neutral name…

In Prey, players take on the role of Morgan Yu (either Male or Female), who awakes on board the Talos I Space Station to discover the outbreak of aliens called Typhon. Morgan is suffering from amnesia, but quickly learns that something must be done about Typhon, or Earth will be in danger. Through the story, Morgan begins to uncover that Talos I is not as it appears. 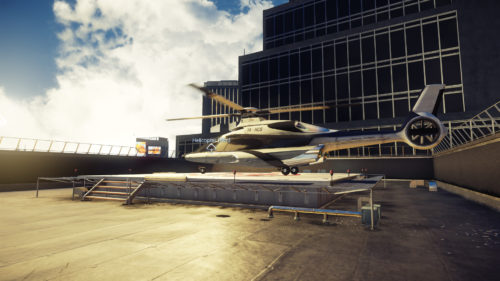 Just an easy day on the job

Prey’s story starts off with a bang. You wake up on Talos I with a clear objective to start your first day of work. As you make your way through the peaceful station, things feel eerily idyllic. As the player, you know something is not quite right. This feeling of something being off, follows you throughout the game and is very well done and interesting. The feeling reminded me of playing Bioshock for the first time. Which I really appreciated. The feeling of unease makes uncovering the secrets of Talos I more satisfying and surprising. 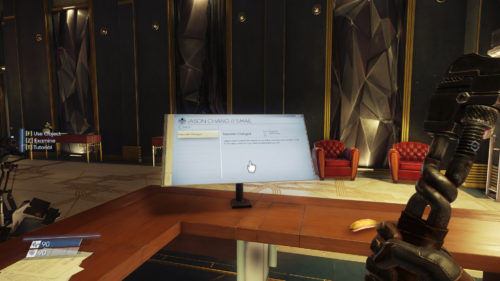 The key to story in Prey

Storytelling in Prey is delivered through a few key avenues: Emails, Transcribes, Character Interaction, the Environment, and Voice Coms. Each area feels well thought out and works. Find a computer with emails on it? Read the emails to learn about the people on Talos I. Find a Transcribe? Listen to it and you now have a new Key Code to unlock a door. By exploring the environment, players are rewarded with more stories and more information on what exactly happened on Talos I. Arkane has done a brilliant job of putting the breadcrumbs before the player; leaving it for them to decide how deep they want to go. If you opt to stick strictly to the main story, you’ll miss out on the beautiful world Arkane Studios has created.

My only real complaint with Prey’s story, is the game’s length and ending. I won’t touch on the ending in any real spoilery way, but I found it to be relatively underwhelming. Prey just sort of ends. Some of this comes from the game’s length. While clocking in at 15ish hours, I found the game to drag past the 12 hour mark. It feels like the ending is near but then throws another objective at you. I would have liked to see Arkane rein things in a touch and really make the ending airtight. And yes, for those wondering, Prey uses a similar morality system to that of Dishonored (multiple endings).

Overall, the story of Prey is an interesting sci fi adventure which features a reach depth of storylines for those who want to explore, but suffers when it comes time to weave all of these threads together in the game’s final moments. There’s no real ‘Bioshock’ like payoff here and for that the storyline just didn’t quite reach what I’d hoped it would. 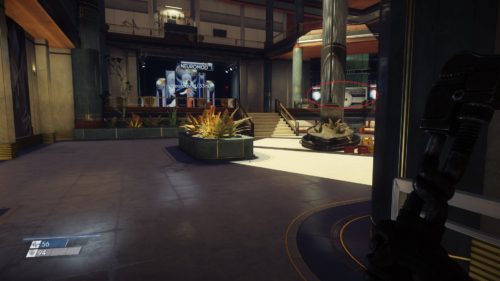 Lighting looks okay, but not amazing

I played Prey on PC and felt that the graphics were pretty good. I don’t think the game looks amazing by any stretch of the imagination, but the graphics are serviceable. In certain areas (such as space), things look gorgeous, while other aspects like character models look old and muddy. This is a similar problem I had with Dishonored and it appears that Arkane hasn’t changed much from those games. 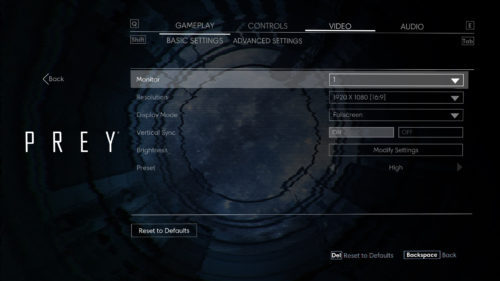 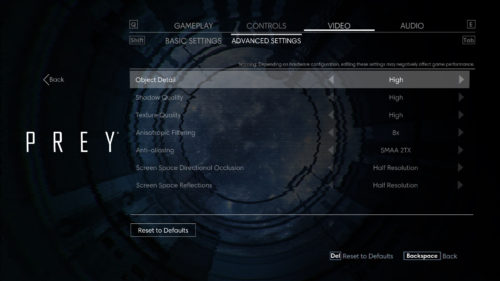 Option wise, Prey support has pretty run of the mill graphic settings. Settings range from Low to Very High. Player’s can tweak settings like Object Detail, Shadow Quality, VSync, and AA to their hearts content. Prey does omit an FOV slider which for me doesn’t matter, but could to some of you readers (there is a work around, but out of the box there is no option).

Overall Prey’s graphics are nothing to really go crazy over, but they are perfectly serviceable. If you didn’t mind how Dishonored/Dishonored 2 looked, you will find Prey’s graphics to be similar. The graphics neither make or break my experience with Prey, but instead are simply there (if that makes sense). 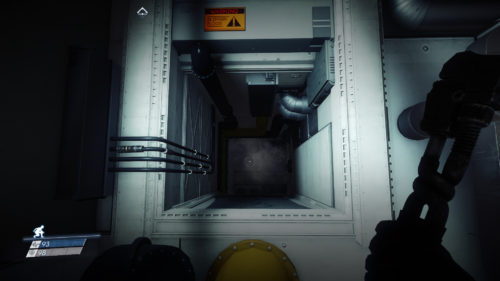 Go in the vent or the door? Choices.

Easily the most enjoyable part of my time with Prey, was the game’s gameplay. Like Dishonored, Prey does a really good job of giving players different options. Talos I is a huge station with different pathways and rooms to explore. Even after beating Prey, I still open streams and seen alternative pathways and rooms I have yet to find. This openness really makes you inhabit the world and aids in the feeling that you are exploring the world your way. 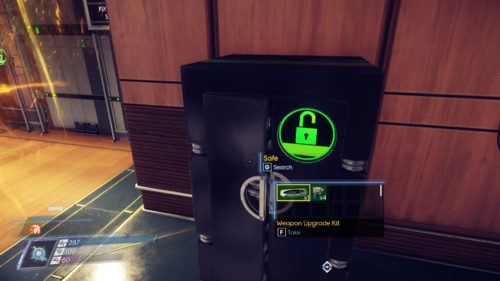 You will scavenge a lot.

Alongside Prey’s exploration and openness is an interesting scavenging and crafting system. Prey features a nifty resource management system where you collect junk from within the world and break it down using Recycler Stations. This gives you materials which can then be crafted into usable supplies like Medkits. As you discover more schematics, you are able to craft more useful items. I personally found the crafting system to work really well. I never felt like I had unlimited supplies, so it felt like my choices actually mattered. The panic that sets in when you run out of ammo and are frantically searching for a Recycler Station is very real. 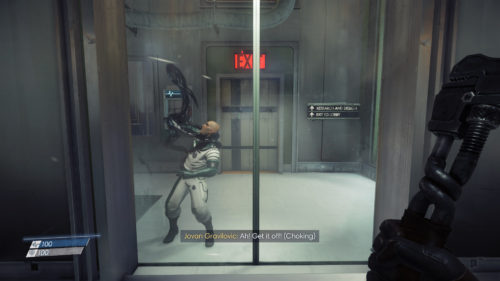 While you are exploring and scavenging, there are enemies on Talos I who will try to kill you. This is where the game’s combat comes into play. Like Prey’s open world design, players are extended similar freedom in how they face off against enemies. Enemies take various forms, but my personal favorite would have to be the Mimic. This small, spider like alien, can take the form of any random item inside a room. This means that any item you pick up could potentially be an enemy. Essentially, Arkane created a Prop Hunt enemy and the results are terrifying. I jumped so many times playing Prey that I can now dunk a basketball with ease. 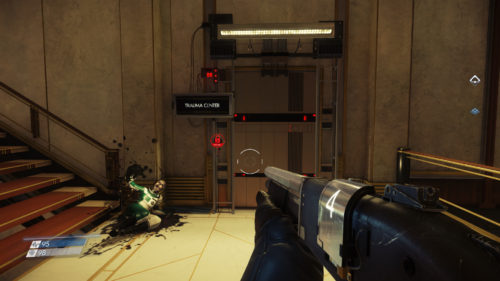 How you face off against the enemies in Prey is completely up to you. While I opted to fight, other players may sneak around, relying on stealth instead. This flexibility means that there is replayability in Prey, as the game really encourages experimentation. Some fans may simply stick to guns, while other may stick to Psi abilities (basically mental powers). Like Dishonored, Arkane leaves combat encounters up to the player and it really shines. If I could make a comparison of Prey’s combat to other games, it would easily be Bioshock + Dishonored. Like these games, Prey features a levelling system as well as various abilities which impact combat. By pulling from these awesome franchises, Prey positions itself to create some memorable combat moments.

Not everything in Prey’s combat hits though. The worst offender are the game’s enemies. While I love the Mimics design, other enemies like the Phantoms are just plain annoying to fight. This could have easily been remedied if they were more enemy types in the game, but instead the enemies you face are very samey. Later in the game you get a break, but you will mostly be fighting some type of super Phantom or super Mimic. Given the design and care that went into creating Talos I, the fact the Typhon are so few in design, seems like a missed opportunity.

Prey has incredible sound. Both the Ost as well as the ambient sounds are well done. They add so much to the game and really help to create the atmosphere of Talos I. Going synthwave was a wise choice!

Ran way better then Dishonored 2 on PC. I had no problems playing Prey over my 15+ hour playthrough. Arkane actually gave us a good PC port!

Having already hit 1300 words, I’m gonna attempt to wrap this Prey review up in a coherent manner. Overall, Arkane Studios has created an interesting and enjoyable reboot of Prey. The game’s story is interesting and has a nice depth to it if you look, but the game itself could have benefitted from being a bit shorter and ending with more of a bang. In addition, graphically the game neither wowed me nor disappointed me, but instead was more middle of the road. In terms of gameplay, Prey really shines. By pulling from games like Bioshock and Dishonored, Prey puts a sci – fi/horror spin on established mechanics which were a blast to use.

What do you think of this Prey Review? Agree? Disagree? What would your Prey Review be? Let me know in the Pit below.