The phrase “press hold to reset” has never been more relevant to me than since I got my Xbox One. I doubt I could count how many times I’ve wandered up to my Xbox to “hold” the touch button long enough that it performs a hard reset. Be it because my controller won’t sync, or because the games are lagging, or because Xbox Live is down (yet again), there’s always a reason. Is it annoying? Sure. But it’s the price I pay to be able to play couch co-ops with my bros and some brews. So, I grin and bear it.

Such is the life of a console peasant. That being said, if the gaming marketplace (or the French revolution) has told us anything, it is that peasants can be marketed to and that they have a voice.

It is with that p(l)easant voice that I, Alex Rogan’s Beta, make my Hold to Reset debute. To give the console gamers of us a voice, amongst the rants of superiority that the master race plague the online community with. Specifically, against Enricofairme’s voice, because Enrico does not agree with the following statement:

Now, before I can tackle this specifically, I have some housekeeping I need to get out of the way. First, I played Borderlands before I owned any gaming platform of any kind: I burned out on it at a buddy’s place on his Playstation. We played it like mad for a few months, and uncharacteristically did so while munching down on feta-stuffed olives and Triscut crackers. Second, I have yet to beat Borderlands 2, though I’ve started and stopped every character with varying arrangements of in-person and online friends. For some reason we never see it through because none of us really care about our characters or their growth (more on that later).

With those things in mind, allow me to present my arguments for why Borderlands is superior to Borderlands 2. I will arrange my arguments in descending numerical order (as most lists are arranged), but in ascending importance to confuse the hell out of you.

I agree that it’s a lame duck argument, which is why I’m listing it first, but when playing Borderlands you’re struck by the “newness” of it all in a way that is simply lacking in Borderlands 2. While playing Borderlands the outlandishness of everything contributes in a great way to the playability of this game. It’s a nutso storyline to begin with. Moreover, the idea of midgets running at you with shotguns, and skull faces getting up in your grill holding grenades, and wacko animals popping out of the ground to destroy you, are all exciting in Borderlands. In Borderlands 2 you’ve already seen it all, and anything “new” they throw in simply seem to be rehashes of what came before. I mean, really, no matter what Hammerlock calls them, Bonerfarts are just the new skags. Without that magic, Borderlands 2 had me rushing from waypoint to waypoint, blowing things up ASAP, just to get to the next waypoint. Whereas when playing Borderlands I would dillydawddle, take my time, and take in all the uniqueness that was around me. I miss that. 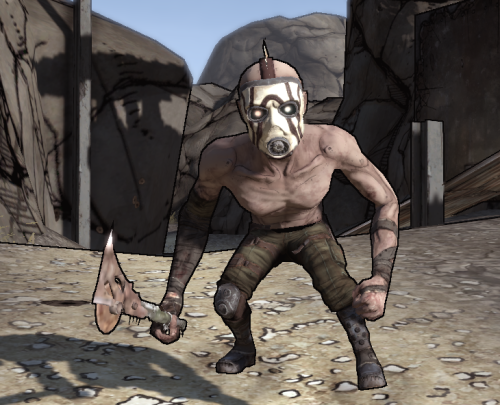 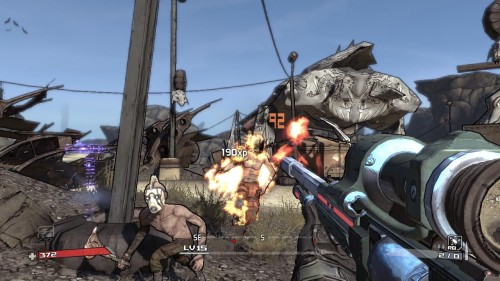 I get that when they made Borderlands 2 they wanted to refine the experience. As a result, they made rare guns really rare. Super rare, in fact. You really need to work to get those awesome orange guns. In a way, when you get one, that makes it gratifying. But it doesn’t make it fun. What was fun was literally stumbling upon guns that would seem over powered for a while. It was fantastic! You’d kill a random dude and due to some background algorithm you’d end up with an awesome shotgun that’d tide you over for a while until it’s low level made it irrelevant. It meant that after any gunfight you could find “the one”. In Borderlands 2, however, I feel like any gun found in a firefight that isn’t a boss can immediately be chalked up to as junk and sold. I’m not excited to pick up loot in Borderlands 2, and that’s really sad! I used to love the after-battle looting. Now it’s just a chore.

Speaking of guns, I, like many of you, adored Borderlands for all the awesome guns it had. I remember clearly the trailer for Borderlands 2 and how it stated that the “bazillion” guns would become “bazilliondier”: I peed my pants a little hearing that. The reality is, sadly, that Borderlands 2 simply presented us with a bazillion variants on the same guns over and over. To the point where you’d pick up two, nearly identical guns, with only one point of difference on one stat. Does that really count as different? I say no. So, instead of Borderlands 2 presenting me with a bazillions new guns (which is what I hoped for), it presented me with the same bazillion, each with a bazillion boring variants. Nothing to see here, move on folks. 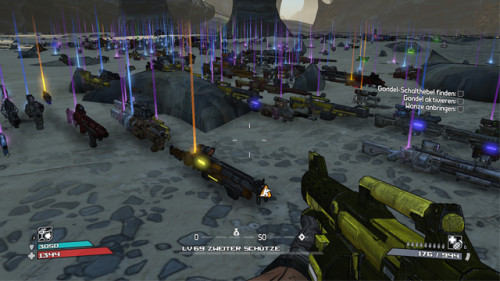 Almost the same argument as the last one, but even more important in my eyes: the classes in Borderlands 2 were boring. Sabre Turret was basically the same thing as Scorpio Turret. Buzz Axe Rampage was basically the same thing as Berzerk. Phasewalk was cooler than Phaselock. And Bloodwing was much cooler than Decepti0n. Not to mention that Zer0 talked way too much during Decepti0n. Claptrap was less obnoxious to listen to than Zer0. Gunzerker was just a ranged version of Berzerker, so, another yawn. Finally we have Death Trap, which I’ll admit was pretty cool (though, I could easily argue that it’s the same as Bloodwing….). All in all, the “new” classes were shrug-worthy. 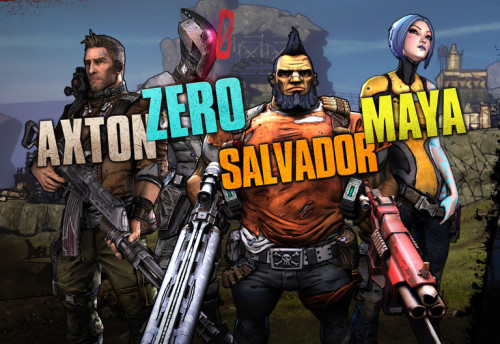 Is that it Gearbox?

This is the thing that irked me the most, which is why it is listed last. I hate the Badass point system. But, even more than that, I hate that it replaced gun proficiency. In essence the Badass system replaced any need to roleplay or build a character. I could have never used a shotgun for the whole damn game, find one at the very end of the game and be as effective with it as with any other gun. This. Is. Dumb. Part of choosing a class in Borderlands was recognizing that not only were you choosing an ability, but also building a character. By the end of Borderlands I had a sniper master, who also happened to be a pistol maniac, while his trusty Bloodwing ravaged foes from on high. In Borderlands 2 I can just use whatever gun is “best” at the moment, and give no concern to type. I played with a “whatever works” mindset, rather than a “my character is good at this” mindset. Some will argue that this is a strength: it allows for flexibility, for you to change your playstyle mid-game, and is less restrictive (especially in the end game). But for me it took all the personality out of my character. My character became nothing more than a reticle on the screen with a special ability. As a fan of roleplaying games perhaps I’m projecting onto an FPS what really shouldn’t be there. But I believe that the roleplaying elements of Borderlands strengthened my emotional attachment to the game, legitimized all the hours put into the character (by building your character’s proficiency in a style of gunplay), and brought meaning in a way that Borderlands 2 severely lacks.

But then again, what do I know? I’m just a console peasant.

Alex Rogan’s Beta was sent from Rylos to bone Alex’s girlfriend while he way away fighting Xur and the Ko-dan Armada.