Home » Gaming News » What is That? Observer Looks Like a Blade Runner – Esque Horror

What is That? Observer Looks Like a Blade Runner – Esque Horror

What would you do if your fears were hacked? This is the tagline for Bloober Team’s upcoming game, Observer. If the name Bloober Team sounds familiar, it’s because this is the same studio that brought indie horror, Layers of Fear to audiences last year. Following up Layers of Fear, Bloober Team is releasing Observer in the coming days and the game looks to be a Blade Runner – esque horror. Let’s take a closer look at Observer. 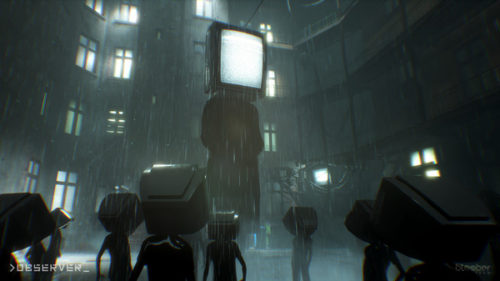 Set in the year 2084, player’s take on the role of Detective Dan Lazarski who’s played by Blade Runner’s Rutger Hauer. Lazarski serves as an Observer, an elite neural detective who works for a corporate – funded police unit. To ‘observe’, Lazarski hacks into the minds of suspects. Here he discovers the darkest horrors of unstable minds. As Lazarski ventures deeper into the minds of these individuals, the line between what is real and what is fake, begins to blur. Bloober promises that “What you see will disturb you” (Source).

Having watched some early stream footage of Observer, I can say the game looks pretty interesting. The atmosphere and world is colorful, but in a drab, cyberpunk way. Gameplay wise, the game looks to be inline with that of other horror games. Players will spend their time investigating locations for clues as well as experiencing disturbed memories. Of the little I’ve seen of Observer, I can say that the experience looks intriguing. While I personally will wait for a sale (Agents of Mayhem is coming out at the same time), fans of horror games may want to grab this on August 15th for either PC, PS4, or Xbox One.

More What is That

How do you think this game looks? You gonna pick it up on Tuesday? Let me know in The Pit below.