In a day of reveals, NVIDIA brought some serious heat to their presentation with the announcement of the upcoming GTX 1080 GPU. This card is an absolute beast. Coming in at $599 msrp, the GTX 1080 will bring insane performance at a reasonable price. The 1080 is twice as fast as NVIDIA’s current king the Titan x and is faster then two GTX 980 cards running in SLI. While the card boasts more performance, power efficiency seems to be another area NVIDIA has improved their technology. Being built on the new Pascal architecture, the card will feature better power efficiency then GPUs of the older generations. The card itself is has been the work of some serious R&D, with CEO Jen Hsun Huang citing the budget to be “several billion dollars’ . If the card has got you impatiently waiting to buy, fear not, as the GTX 1080 is coming rather quickly on May 27. 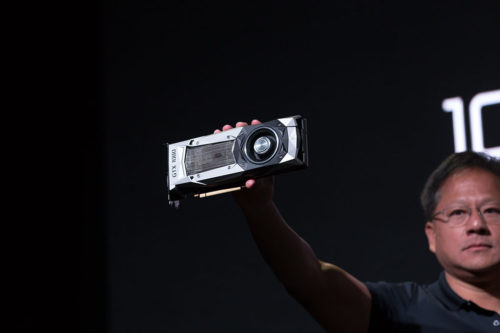 With the reveal of the 1080, NVIDIA has brought some serious competition to the PC parts space. It remains to be seen how AMD will respond, but AMD is set to announce their own cards this summer. Being built with the new Polaris technology, AMD is also focusing on power efficiency as well. All this competition and new architectures has me seriously considering doing a new build this year. What a time to be a PC gamer.

If you are interested in reading more about the card go here.