The new Tomb Raider movie trailer dropped recently, and it looks… like a video game adaption movie. Starring Alicia Vikander as the titular Lara Croft, the new film sees Lara Croft exploring the island on which her father went missing. Give the trailer a watch below.

About The Tomb Raider Movie

Based on the semi – popular Tomb Raider video game series, the new Tomb Raider movie is an attempt to reboot the franchise after the Angelina Jolie led trilogy of the early 2000s. Helmed by director, Roar Uthaug, the new Tomb Raider features the acting talents of Alicia Vikander, (my boy) Walton Goggins, Hannah John – Kamen, Dominic West, and Daniel Wu.

As the trailer shows, Lara’s father, Lord Richard Croft (Dominic West), dies and leaves behind a message only Lara Croft (Alicia Vikander) is smart enough to discover. In the message, Lara’s father speak of a powerful artifact located on a mysterious island. This artifact must not fall into the hands of Mathias Vogel (Walton Goggins) , who would use it for evil. During the adventure, Lara finds herself getting into various Indiana Jones and Uncharted-esque action moments that include sinking ships, jumping large gaps, and heading into unknown tombs. 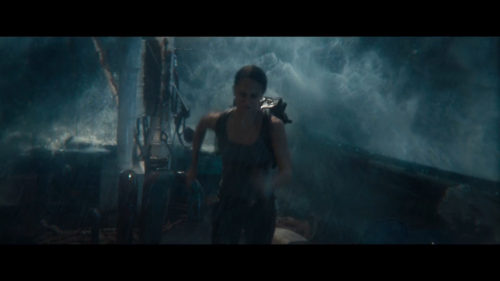 I’ve spent some time watching various videogame to film adaptations including Super Mario Bros., Doom, and Mortal Kombat, and I can easily say that videogame films usually suck. Capturing the feel of a videogame in film is hard. The same can be said about film to videogame adaptations as well. There are nuances to both mediums that don’t resonate when they cross over.

From what I’ve seen in the first Tomb Raider trailer, I can say this movie doesn’t look good. The action looks cheesy, and the story seems uninteresting. The idea of having to stay tied to the source material so closely is just so… bad. We know the origins of Lara Croft. Why not put a new spin on a tired formula?

The new Tomb Raider movie will release in 2018.

Thoughts on the new Tomb Raider movie trailer? Let me know in The Pit below.