It honestly feels like Netflix is trying to kill me. The amount of anime they have been producing, or have available for me to watch, really makes it hard to accomplish much else. One of Netflix’s more recent original’s is Castlevania. Yes, that Castlevania, the one released by Konami that has spawned numerous entries in the video game franchise. Thankfully for us, the first season of Castlevania is short, which means I can easily get through it (hooray). Like the other series I am reviewing, I will be doing my review the old fashion way: one episode at a time. Check out my Castlevania review below. *Heavy Spoilers Below* 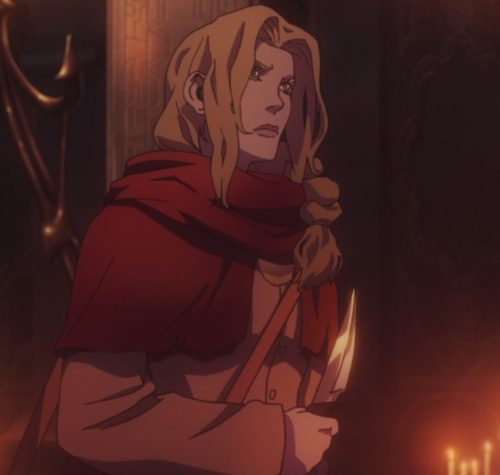 Episode 1 of Castlevania introduces us to the character Lisa from Lupu. Lisa ventures to the castle of Vlad Dracula Tepes. Tepes is a vampire with ‘secret knowledge’ who Lisa believes can help teach her to heal people. Tepes agrees and even states that he might like Lisa after all.

20 years after meeting Tepes, Lisa finds herself being burned at the stake. The burning is due to Lisa having ” Witch’s Things ” inside her residence. While burning, Lisa calls out to Tepes to spare the cities residents as they don’t know what they are doing. 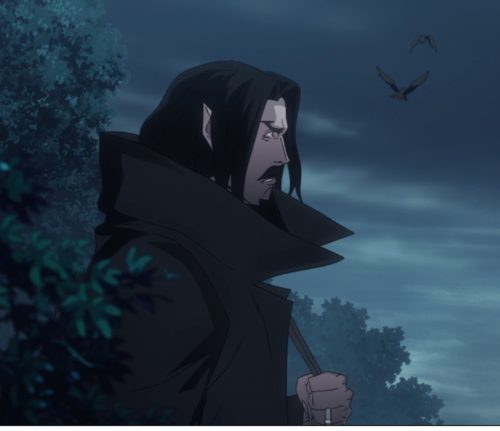 After Lisa dies, we follow Tepes as he returns to his now destroyed residence. Turns out old Tepes and Lisa were married. Having heard that Lisa is now dead, Tepes returns to his vampiric form and promises to lay waste to Gresit, the city which killed his wife. In his fury, Tepes gives Gresit one year to remove all traces of their human touch upon the land before he rains destruction upon them.

Long story short, Tepes delivers on his promise and completely annihilates Gresit in gloriously bloody fashion (literally). Destruction of Gresit comes in the form of a demonic army which descends on Gresit and kills pretty much everyone in its path. After destroying the city in which his wife was murdered, Tepes commands the army to destroy other cities, essentially hoping to wipe out all of humanity.

Episode 1 ends with the introduction of Trevor Belmont, who is drinking in a pub when news of the advancing horde arrives. Turns out people don’t like the Belmont’s all that much. Who knew? 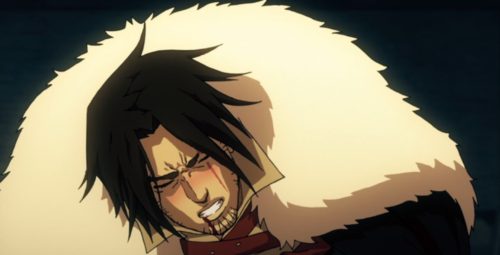 Episode 2 continues right where Episode 1 left off, inside the pub with Belmont. Belmont is spending his time drinking. The Belmont family has a history of fighting monsters, but are not held in the highest esteem by the Church. The guys in the pub who are dissing the Belmont family, don’t take to kindly to there being a Belmont in their midst. Belmont gets into a fight with the three men. Being drunk, Belmont struggles to fight them, but ultimately walks out the victor.

Having won the Pub brawl, Belmont travels towards the next city in hopes of securing some breakfast. Belmont arrives in Gresit which just happens to be the city that was raided by demons in Episode 1. Gresit itself is in rough shape, but there are still a few inhabitants left.

Belmont soon learns that the Church is still attempting to maintain order in Gresit, but is failing at protecting most of the citizens. Alongside the Church is also a collection of individuals called the Speakers. This group of individuals are old magic users who don’t get along with the Church. While wandering Gresit, Belmont stumbles upon a Speaker who is about to be murdered by a couple of priests. Belmont reluctantly intervenes and meets the Elder of the Speakers.

The Speakers have descended on Gresit in order to learn more about The Sleeping Soldier, a savior that lays dormant beneath Gresit, until the time of need arises. Belmont doesn’t believe much of what the Speakers tell him, but ultimately gets roped into saving a missing Speaker who has ventured into Gresit’s Catacombs (it’s the Elder Speakers grandchild).

Episode 2 was more heavy on the story side and that’s okay. We learned a bit about Belmont and the role his family has played in fighting monsters. We also learn that Belmont is more of a reluctant hero type, which means he often spends time not wanting to get involved (I respect that). Overall I will say I am starting to get a bit of a Berserk vibe out of Castlevania, which I think was a good decision to make. The blending of fantasy/goth just works for me and makes me want a Dark Souls anime.