Monster Hunter World which is slated to release on January 26 will be receiving a Day One patch it has been revealed. The Day One patch will add a couple of new features, including the addition of Poogies and Gallery Mode along with unlocking online functionality.

Fans of the Monster Hunter series, probably noticed a lack series staple Poogies in recent beta tests. Capcom assured players that Poogies would be in the game in some form, and we now know they will be added come launch day. 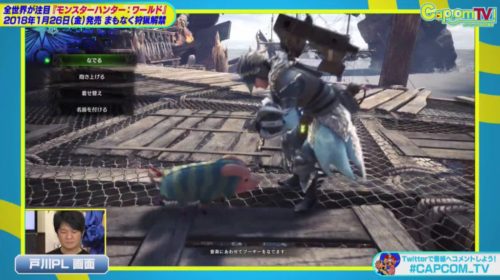 As reported by Siliconera, a recent Capcom TV live stream featuring Monster Hunter World producer Ryozo Tsujimoto revealed the Poogie addition along with game mechanics surrounding the companions. Like in previous games, players will be able to show their Poogies affection through petting. There will also be a new treasure hunting mechanic which allows hunters to carry their Poogies in their arms as they search out hidden items. While carrying your Poogie, the controller will rumble to indicate nearby treasure. Placing your Poogie down will cause it to run off and collect the item for you.

Alongside the addition of Poogies, the Day One patch will also be adding a Gallery Mode. In this mode, Hunters will be able to go back and rewatch scenes whenever they like.

The last piece of the Day One Patch will unlock online play. This is meant to prevent individuals who acquire the game early, from being able to play online.

With the launch of Monster Hunter World around the corner, Capcom is holding a final beta test before release. PlayStation 4 users will be able to jump into the final open beta between January 19 to January 22. The following Friday, January 26, both Xbox One and PlayStation 4 versions of the game will launch. Unfortunately for PC players, Monster Hunter World is not being released until fall 2018.

Thoughts on the Monster Hunter World Day One patch? Let me hear them in The Pit below.