Mass Effect Andromeda released on March 21st and has a somewhat interesting launch. Basically, the game’s reception, was less than stellar for a AAA game release. Many of the complaints stemmed around Andromeda’s animations, but there is more to the game then that. So how is Mass Effect Andromeda? After putting roughly 40 hours (beat game with 70% completion), I feel like I can provide a pretty accurate Mass Effect Andromeda Review.

What is Mass Effect Andromeda? 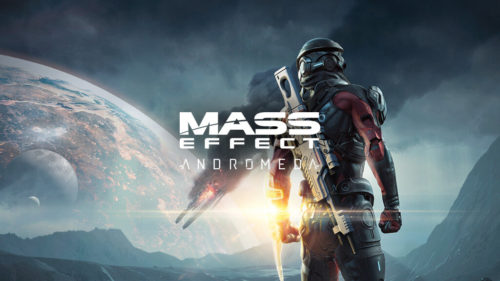 Mass Effect Andromeda is the fourth entry into Bioware’s acclaimed Mass Effect series. Andromeda is loosely tied to the first trilogy, but moves things to the Andromeda galaxy. Players take the on the role of either Male Ryder or Female Ryder. The Ryder’s are on the Hyperius Ark which is a human ark that is carrying tens of thousands of humans to colonize the Andromeda galaxy. Long story short, Ryder ends up becoming the human’s Pathfinder who is basically a galactic Christopher Columbus. As Pathfinder, you must help all the other races and face off against alien threats that aren’t too happy you are in Andromeda. 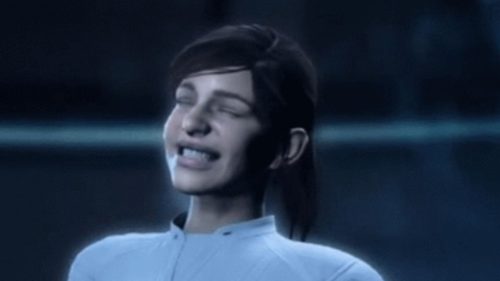 Before we dive right in, let’s get this out of the way. Simply put, the character animations in Andromeda are horrendous. Most of the game’s animations would not have been passable 5 years ago; so the fact Bioware released the game with these animations is interesting to say the least. Comparisons to a game like Witcher 3, make Andromeda appear to have been designed by first year game dev students. Characters appear so inhuman and grotesque in certain instances, that all you can do is laugh. I will concede that the aliens animations are a touch better, but I chalk this up to that fact that they are ‘Aliens’, so my expectations are non-existent.

Characters models aren’t the only area where animation is a problem. One of the more head scratching moments I had playing Andromeda was when I undertook the game’s resource scanning minigame. Simply put, this minigame is akin to previous Mass Effects, but now there is a ‘travel animation’ between planets. This animation is not skippable and takes up a good 20 – 30 seconds between planets. Why this is needed is beyond me. I could defend it five hours in as immersion building, but by 35 hours in I was watching JoJo’s on my second monitor during down time. Hopefully Bioware can maybe give us an option to turn this off in the near future.

Yes, this character holds the gun backwards and shoots it.

Overall, I was definitely not impressed by the animations in Mass Effect Andromeda. The internet hate although taking things to the extreme, was not wrong in pointing out that Bioware completely dropped the ball in the animations department.

With that out of the way, let’s jump into the traditional Mass Effecty elements of Andromeda. First and foremost would be story. I largely play the Mass Effect games for the story. Inessence the Mass Effect series creates a galactic soap opera which lets me bang aliens. Andromeda maintains this tradition. I will point out that the Andromeda’s story is very similar to Mass Effect 1. 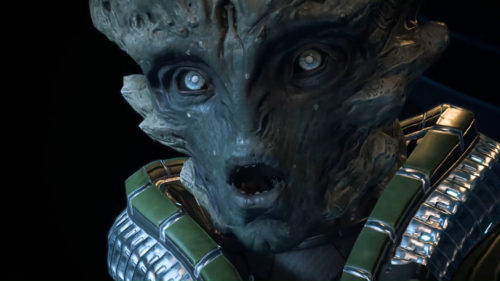 This is not a Reaper

Basically, Ryder is Shepard and follows similar ‘story tropes’ that occur in Mass Effect 1. Some examples of these tropes include: an alien race that is attempting to destroy the galaxy, a robot alien race that is also an enemy, event happens at beginning and entire galaxy turns to you for help, etc. So if you were hoping for Bioware to create a brand new story, well Andromeda ain’t it. If you just want more Mass Effect stories, then Andromeda delivers that experience pretty well.

Like other Mass Effects, Andromeda utilizes all the traditional storytelling devices (talking to people, reading datapads, scanning). Of all these devices, the person to person interaction is probably the weakest. This is largely due to inconsistent voice over, which means that some characters are fun to talk to while others will have you mashing the spacebar to skip. 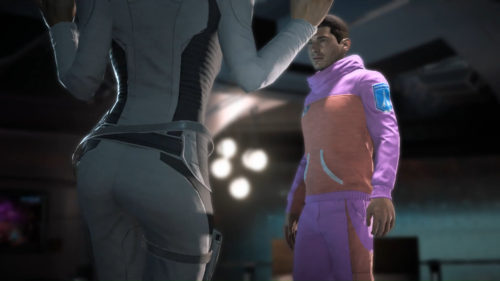 Speaking of characters, there are a lot in Andromeda. I’ve heard that this number is in the 1000s, but obviously not all of them are treated equally. Ryder and the crewmates play the prominent role here, while other secondary characters exist on the Nexus and other planets. Most of the main characters are interesting and fun to talk to. This follows the tradition of other Mass Effects fairly well. While none of the crewmates are as iconic as those in the trilogy this is more to do with time then anything else (we haven’t spent three games with them).

I’ve read critiques that Andromeda is poorly written, but I think the game is very in line with others in the series. Like previous games, there are lines which will have you groaning, but there are some well written parts as well. I will say that given how bad the animations are, the attempts at emotional resonance are completely lost, especially if you play FemRyder. This definitely hurts the story. 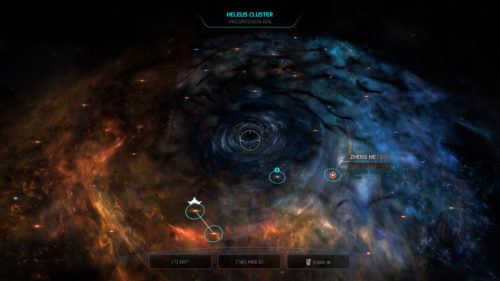 In between pockets of story, there is still a game to be played. Mass Effect Andromeda ventures into new territory for the Mass Effect series, by providing more open world exploration than any of the previous three titles. An easy way to describe Andromeda would be an amalgamation of Mass Effect’s space themes with Dragon Age: Inquisition’s open map exploration.

In Andromeda, you fly to various planets in hopes of establishing colonies. Each planet has its own colonization viability meter which must be filled. Filling this meter entails finishing tasks, quests, mining materials, or establishing forward stations on said planet. Once a colony is established, you get a bunch of new things to do on the planet. This cycle spans across multiple planets and leaves the player with a ton of stuff to do. With that being said, I never really felt like much of what I did on world mattered all that much, and many of the quests are basically filler. This is unfortunate, especially after reading that Bioware was wanting to take a more quality over quantity approach to Andromeda’s sidequests.

Another issue I had with planet exploration is that the planets themselves are pretty dull. Before I eviscerate, let me say that the planets themselves are graphically gorgeous. My problem is more with how generic the planets are. The most interesting planet I encountered in my playthrough was the very first planet you fall onto at Andromeda’s beginning. The rest of the planets read like a Sci fi checklist. There’s an Ice planet, a desert planet, a sandier desert planet, an Avatar planet and so on. I wish Bioware had played around with planet design even further. They easily could’ve introduced more uniqueness to planets in the form of altered physics.

The genericness of the planets is not helped by the fact that 90% of a planet’s surface is empty. All planets are laid out in similar fashion.  Each planet has some form of natural hazard which limits movement, but once dealt with, opens the map up even more. Each planet has a settlement, a couple of alien outposts, some remnant structures and that’s about it. In a game that boasts exploration, there weren’t many moments where I simply stumbled onto something. Everything is laid out very rigidly and boring. 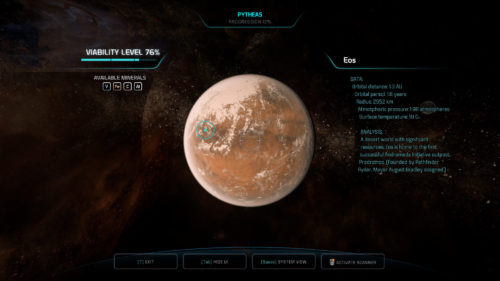 Most worlds need to be traversed using the Nomad, which is this generation’s Mako. The Nomad maneuvers pretty well and is pretty fun to drive. This new Mako can be upgraded, and boasts a nice selection of pimpin’ paint jobs that I loved. The Nomad is well done and helps you get around the worlds efficiently.

The majority of the Andromeda is centered around exploration, but the game removes much of the exploration aspect. Andromeda presents a very rigid mold that each planet falls into and makes it hard to want to pursue 100% completion. Instead you will probably find yourself dumping 20 hours in and then rushing to the end.

Easily the best part of Andromeda is the revised combat system. Gone are the days of pausing. Instead we now have jump jets and dodge mechanics which make fights feel fun and frenetic. Jump jets alone offer a whole new aspect of verticality that we haven’t seen in any previous Mass Effect. Alongside jump jets is a tweaked approach to classes. Instead of being stuck in a class, players have access to profiles, which means you can switch from a soldier to technician mid game. This allows players to experiment far more and even got me out of my shell of only playing soldier.

Abilities are all pretty standard fare and I am sure everyone will have their biotic/tech favorites. Like previous games, you earn experience and unlock new abilities. More abilities would have been nice, but overall there is enough here to play around with and have some fun. 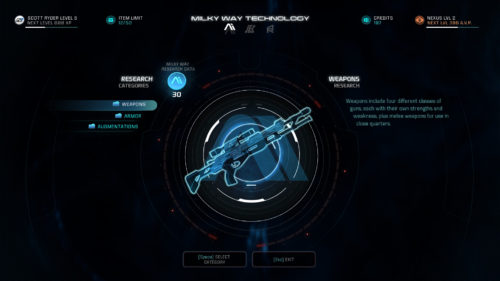 Crafting is another new aspect Andromeda introduces to the series. Players can gather resource which in turn can used to craft weapons/armor. To be perfectly honest, I never really did much with this. It seems like it worked okay, but the fact that I needed to craft a new version of a gun everytime I wanted the higher level equivalent turned me off.

The changes Andromeda has made to combat are not all good, however. Some players may find the switch from tactical to action frustrating, which I appreciate. There has also been some serious changes to crewmates which I dislike. Players no longer control things like activating abilities or loadouts. Instead each character has a specific loadout which doesn’t change. This design choice is not the worst, but seems a bit out of touch from the player base. Who doesn’t like outfitting crewmates?

I HAVE NO IDEA HOW YOU CAN TAKE SOMETHING THAT HAS BEEN KNOWN TO BE TEDIOUS AND BORING FOR THREE GAMEs AND MAKE IT MORE TEDIOUS AND MORE BORING.

I normally wouldn’t point out bugs in my review, but I am making an exception for Andromeda as I experienced an exorbitant amount. I feel like I could say with almost 100% certainty that Andromeda was rushed out and it definitely shows. A few that I found especially frustrating were: crashes to desktop when alt-tabbed, dashing through objects and ending up out of bounds, autosaves in the air over pits of death, quest requirements not disappearing, npcs not appearing in cutscenes, Ryder not appearing in cutscenes, and for the sake of time I’ll stop there. Just know that if you pick up Andromeda, you are buying an Early Access title.

Before I close, I have to mention Andromeda’s UI. The UI in this game is pretty convoluted and poorly executed. It often takes multiple clicks to get anywhere you want to in the menus and is so poorly executed. That’s all I want to say on that.

Andromeda is not really a good  game. I went into the experience having come fresh off a replay of the previous trilogy, and after about 5 hours of Andromeda I was just kind of apethetic towards it. What is especially frustrating about Andromeda, is that there is a Mass Effect game in there. Instead whether it was time, money, or some other factor, fans were delivered a less than stellar Mass Effect experience. The only way I can really describe the game is basically like a fan made knock off. There are some Mass Effect things here, but the delivery and understanding of what Mass Effect is just feels off. Hopefully Bioware receives a wake up call over Andromeda and heads back to the drawing board on the series.

What did you think of our Mass Effect Andromeda Review? Let us know in the Pit below.