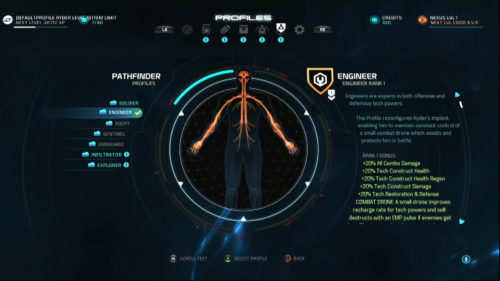 There are 7 Pathfinder Profiles

Like in previous Mass Effects each class has its own strengths and weaknesses. Engineers for example, are better tuned to utilize tech, allowing the class to deal increased combo damage while having more health, faster regeneration and a drone companion. The drone is designed for combat and shoots of an EMP shockwave when destroyed while also providing decreased skill cooldowns while active.

The Soldier class on the other hand focuses solely on combat geared skills. These skills include such things as damage protection, increased ammo capacities, increased weapon damage and accuracy.

What is nice about having all of these classes is the ability to switch to them on the fly. This new gameplay element will really shakeup the combat and make things feel fresh. It will also be nice to not be married to a build and have room to experiment a bit.

Within Each Pathfinder Profile Are Skills 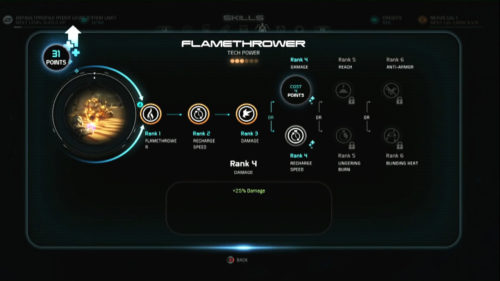 Each Pathfinder Profile features its own set of rich skills and ability which can be upgraded to better suit different play styles. The trailer shows off the Player adding a flamethrower to their arsenal by leveling up an ability. How the leveling works exactly is still unknown, but I expect the game will follow previous games in terms of both combat and story giving experience.

*This is all bound to pre-release information and will most likely change.  However, when changes are announced this guide will be updated.

What did you think of this Mass Effect Andromeda Pathfinder Profiles rundown? Let me know in the Pit below.