The Mass Effect Andromeda conversation system works similar to previous Mass Effects, but now you will have more responses to choose from. Responses are categorized by certain symbols appearing on the head in the middle of the conversation wheel. Based on the personalities of the NPCs, they will react differently to how you respond to them. 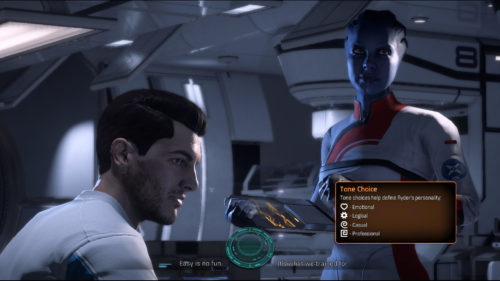 Emotional (Heart) – this response can be compared to the Paragon response in previous Mass Effects. Use this response choice if you want to answer in a sympathetic, kind, helpful, understanding, or optimistic way. Want to be an emotional leader? This choice is for you!

Logical (Gear) – Instead of answering with emotion, you can instead choose to be logical. This is exactly as it sounds. The player’s response will take into account all relevant information and respond accordingly. Giving logical answers can offend NPCs (just like in real life).

Casual (Spiral) – Are you a jokester? Maybe a fun loving Pathfinder? Choosing the Casual response is the closest to encapsulating this type of character. The answers you give will often be witty, funny, sarcastic, or simply friendly. This is kind of like the Han Solo option.

Any funny Mass Effect Andromeda conversation system moments so far? Let me know in the Pit!