Enricofairme here with another slice of that spicy Netflix original anime’s they appear to be interested in serving up. The last Netflix anime I reviewed was Blame!, which I felt was a fun ride. Now, we shift gears from anime movie to anime tv, with Season 1 of Little Witch Academia. Like my Sword Art Online II review, I will break this down into episodes and then follow up with an overall score. See if you agree with my Little Witch Academia Season 1 review below. *Spoilers Below* 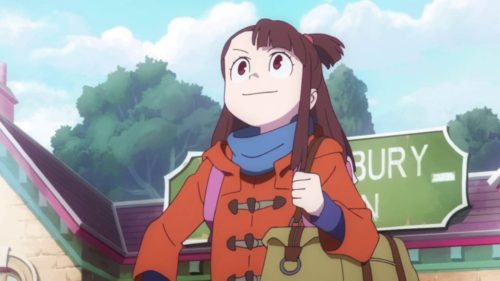 Right from the start, I’m getting a serious Harry Potter vibe. Little Witch Academia starts off with a magical show during which witch Chariot dazzles the audience with her magic. Young Akko, the series main character, happens to be in attendance and is left with the inspiring advice that believing in one’s self is the greatest magic. Fast forward what seems to be a few years, and we learn that Akko is going to be attending Luna Nova Witchcraft Academy, a sort of Hogwart’s like school of magic.

As Akko makes her way to the academy, we learn that she isn’t a very good witch. In fact, Akko barely has the basics down. This is due in part to Akko being a commoner (not born in a witch family). Because Akko is a commoner, she is ridiculed by the other students of the academy. This is especially prevalent in a scene where Akko learns she requires a broom to get to the academy and not a bus. Luckily for Akko, she meets another bumbling witch, Lotte, who agrees to give her a ride.

During the flight to the academy, Akko and Lotte end up crash landing along with another witch (Sucy). All three of the witches end up in The Forest of Arcturus. The Forest of Arcturus turns out to be full of crazy mandrakes, a giant rooster/snake, and a Shiny Rod. Akko, Lotte and Sucy manage to escape the forest, but need to use the Shiny Rod in order to do so. Having survived the forest, Akko, Lotte and Sucy make it to the academy during the opening ceremonies.

Overall my initial impression of Little Witch Academia is something like a cross between Harry Potter and old school Disney cartoons. The art style is easily the most interesting part of episode 1 as it reminds me of old Disney cartoons. Storywise there wasn’t a ton to sink my teeth into, and with only 12 episodes left it has me a bit concerned. With that being said, I dug the opening episode enough to continue watching. 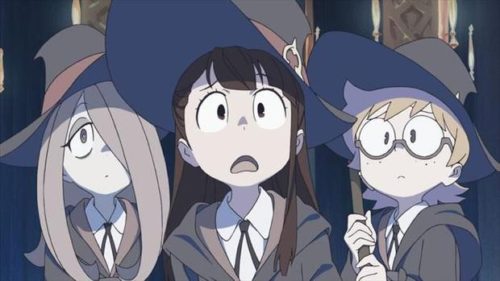 Episode 2 sees Akko start her first day of classes at the academy. Akko quickly learns that classes and general witchery ain’t as exciting as she imagined. Classes range from topics like Magical Linguistics to Cauldron Use. Each class seems more boring than the previous, and is a far cry from the high flying show put on by Chariot in Episode 1.

Speaking of Chariot, we learn that Akko’s peers don’t find Chariot all that impressive of a Witch. This crushes Akko, who believes Chariot was a very powerful and popular witch. The main classmate who bullies Akko over Chariot is Diana, a try-hard witch. Diana is a very powerful witch, but lacks real world experience. This is seen through her decision to attempt to fix the Jennifer Memorial tree.

The Jennifer Memorial Tree houses the spirit of the witch Jennifer. For some reason, the tree is sick and dying. Jennifer attempts to heal the tree, but instead, provides nutrients to the ‘sickness’ on its roots. This causes the tree to go wild (?). Akko comes to the rescue and reverses the tree damage through the use of the Shiny Rod. Diana still gets credit, but seems somewhat distraught because of it.

Like episode 1, I felt like this episode sort of muddled along. Questions like why the memorial tree even mattered came to mind and weren’t really answered. The art style continues to impress me, but the story is just not all that interesting. It seems like the series formula will simply be, something bad happens, Akko will fix it and not receive any credit for it. Occupying a similar vein as mega-franchise Harry Potter, means I would expect them to bring strong storytelling. So far they haven’t really. 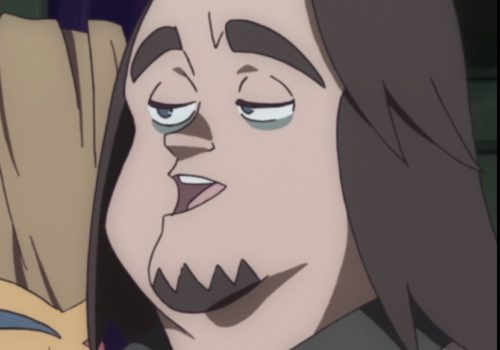 Episode 3 introduces us to Professor Ursula who popped up in early episodes, but never really was formally introduced. Ursula serves as Diana’s guidance counsellor. Her first order of business is to bring Akko her broom! With the broom, Akko can become more like Chariot… Or so she thinks. Turns out flying is much harder than it seems.

Akko is incapable of flying the broom without the help of magical items, so it’s off to the local magic shop. At the magic shop, the kids meet a shopkeeper who looks suspiciously like Chumlee. In the shop, the kids learn there is a broom called The Shooting Star, which is super fast and would be perfect to use in the upcoming broom relay. Unfortunately the broom is locked up good and tight. Looks like Akko needs to practice.

What follows is a fun montage of Akko going full Rocky but with not really positive results. As the day of the race arrives, Akko still can’t ride a broom. As the race unfolds, Akko’s team pulls out to an early lead, but there is some foul play afoot. Amanda, a member of another team has brought The Shooting Star! No one can ride it and Akko ends up being the only one who can handle the wild beast (it’s still pretty wild).

This was probably one of the more enjoyable episodes for me so far, as it bucked convention and actually had Akko fail. The whole time I was expecting her to overtake Diana near the finish line, but the surprise with The Shooting Star was a nice plot twist. I will say the episode sort of ends abruptly, but I thought this was the strongest episode of the season so far. Gotta love training montages and failure.