Home » Walkthroughs » How to Get Rhino – Warframe

How to Get Rhino – Warframe

Since there’s been a lull in releases this summer, I’ve been exploring some free to play options including Warframe. Warframe if you didn’t know, is a PVE looter shooter with a ton of content. Like other looter shooters, Warframe is all about grinding. You will spend your time grinding for weapons, items, and most importantly warframes. To help you on your quest to farm gear, I’m putting together some guides about farming. The first warframe I will be featuring is Rhino (the best warframe). Below I will walk you through how to get Rhino in Warframe.

Buy The Rhino Warframe With Platinum 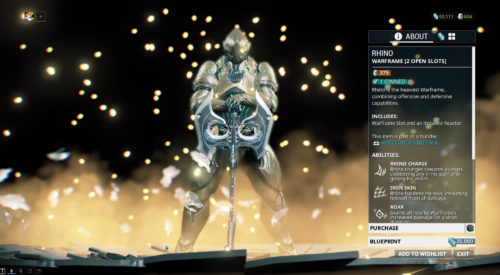 Rhino as it is seen in the market. You can purchase this Warframe for 375 Platinum if you don’t wish to grind for it.

The first (and easiest) way, is to purchase Rhino with Platinum off the Market. Rhino is on the more expensive side of things, but can be purchased for a total of 375 Platinum (~$25 USD). Purchasing Rhino outright means you don’t have to spend time farming for blueprints or waiting for build times. I recommend you consider this option if you are short on time, but flush with cash. 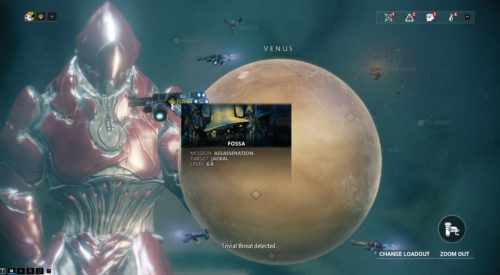 You will want to farm the Jackal Assassination mission on Venus for Rhino blueprints. 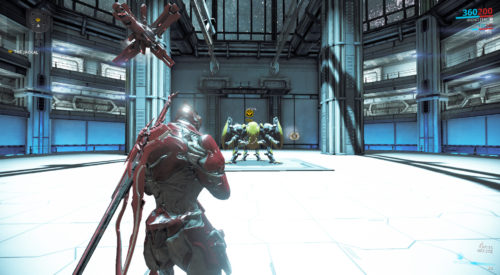 The Jackal is a boss fight you will need to complete multiple times to acquire Rhino blueprints. 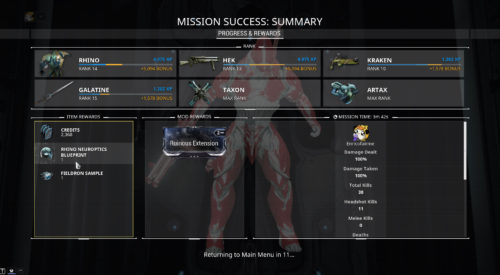 At the end of the level, you should have a Rhino blueprint drop.

If spending cash isn’t really something you want to do, you can farm the blueprints necessary to craft Rhino. For those of you new to games like Warframe, the term farming essentially means running something over and over again until your obtain all items you are looking for. In the case of Rhino you will be farming the Jackal in mission Fossa on Venus.

There are three Rhino blueprints you want to acquire from farming Jackal:

Since you can only acquire one blueprint per run, you will need to run the mission multiple times to get all three pieces. As blueprint drops are randomish, some people will have all the pieces in a few runs, while others will require many runs. Regardless of your luck, farm the mission for all three blueprints to get one step closer to building the Rhino Warframe. 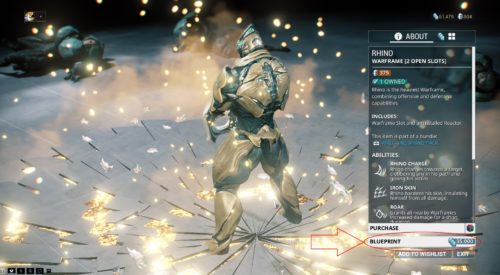 You need to purchase the Rhino blueprint from the Market.

Once you’ve acquired all three blueprints, you’ll need to purchase the Rhino Blueprint from the Market (only way of acquiring). This can be done by navigating to the Rhino Market page and then purchasing the Blueprint (bottom right) for 35,000. Once you have all four blueprints, you can move onto the next phase-crafting Rhino. 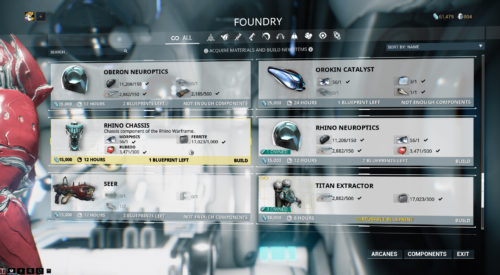 Once you’ve gathered the required material, you can start to craft the different pieces of the Rhino.

After you’ve farmed the necessary blueprints, it’s time to… farm some more. Each blueprint holds a recipe to create a certain Rhino piece by supplying various materials. These materials can be either gathered (the wiki is a good place to look for farming areas) or bought and then put towards building the blueprint at the Foundry. Each Rhino piece blueprint takes 12 hours (real time) to craft. Once all three Rhino pieces are crafted, you can build the Rhino Warframe Blueprint (this takes 72 hours).

Once 72 hours has passed, you can claim your Rhino and begin to use it as you see fit. Congratulations on acquiring one of the best Warframes for beginners. Enjoy stomping on enemies while being almost unkillable.

Thoughts on this how to get Rhino guide? Drop them in The Pit below.